I’m going into this game with very high expectations. Its an Ultima which is reason enough but its also the first game in quite a while that I have practically no knowledge of at all. I never got around to finishing Ultima 7 before so I never played this. Why an Ultima/Origin fan like myself never got around to playing these games for all these years is hard to explain but I think I basically wanted to play the series through from the start some day which I’m finally get around to now.

Starting a new Ultima is always slightly daunting as I know the game will be huge and figuring out what to do next isn’t always easy. Typically, I don’t really get into an Ultima until I’ve been playing for a good few hours. Its also the first time in the main series that I’m not in the familiar setting of Britannia since Ultima 3 which may not help. Having played the rest of the series to date, I’m well prepared this time around though and the engine should be instantly familiar since it uses the same one as Ultima 7. 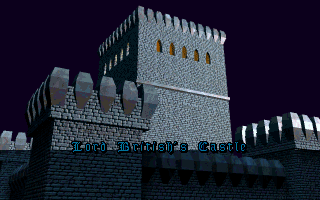 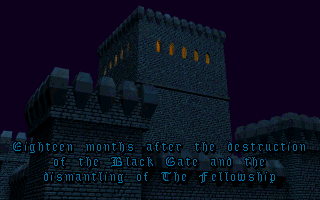 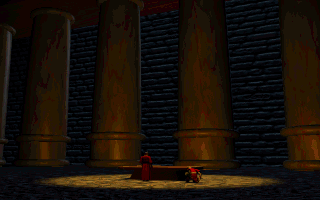 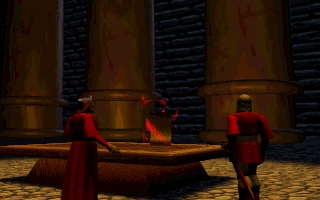 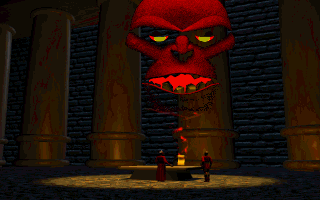 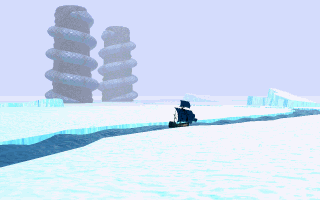 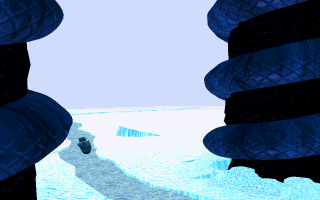 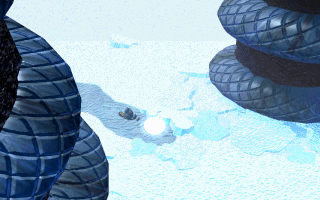 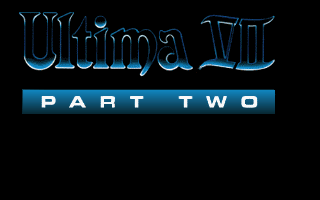 The intro is brief but impressive for a disk based game. It has the now obligatory bad acting especially by LB who should have been kept well away from a microphone for these games. It was edited to fit onto fewer disks and the original version is on Denis Loubet’s website. The edited version is actually a good compromise and as I remember just removes a lot of wave animation from the sea replacing it with static ice instead.

In the intro a scroll from the guardian to Batlin is discovered in his belongings (18 months afterwards?). This scroll tells Batlin to follow Gwenno to the Serpent Isle if the avatar stops him coming through the black gate. The avatar + his usual companions all go through the pillars which will take us to what used to be the lands of danger and despair which I haven’t seen since the very first day of this blog nearly half a year ago in Ultima 1. I’ve read since that the Ultima 3 map was actually the four lands from the first game merged together although I haven’t tried comparing them. This possibly doesn’t help the logic any but then a whole land disappearing behind two magic pillars (which weren’t in any of the other games) doesn’t make much sense either so I’ll suspend my disbelief. Its still nice to have links like this to the origins of the series – the early games don’t have much storyline to draw on so this is a chance to go back and fill things out retrospectively.

This seems like a good point to read the manual which is something I would never have done back in 1993 before playing a game. It is written by a mage called Erstum who tells how the communities of Fawn, Montor and Moon moved through the pillars to escape the rule of Lord British who is described as hapless since he always relies on a stranger to solve his problems – he may have a point… It only gives the history of the first 3 games however as he doesn’t know how things turned out in the end. It appears as though the giant Earth Serpent from Ultima 3 also ended up travelling through the pillars and the manual mentions using its teeth to teleport around the world which sounds like something to look out for. Finally, there appears to have been settlement in these lands before the Sosarians emigrated as a scroll was found with yet another series of virtues this time based on the principles of Order and Chaos.

I’m not sure that every Ultima really needs to have an alternative set of virtues. It was a good idea once but its been near enough every game since Ultima 5. Anyway onto the game. 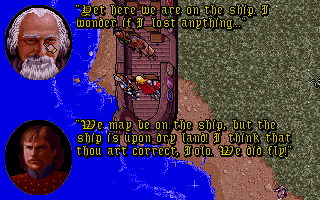 The first impression on starting is that it looks exactly like Ultima 7. Its even using all the same tiles. Ultima 7 looked good enough that this doesn’t bother me especially – I’m sure I’ll see some new stuff later on. The portraits at least, are much larger and more realistic in the same way as Underworld 2 which is a big improvement and gives the people a bit more character. The inventory screen also shows me wearing or holding anything equipped which is an improvement. 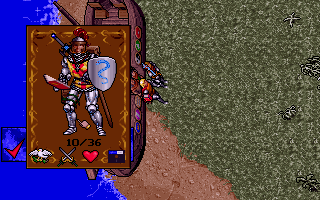 We’ve literally landed on the shoreline of Serpent Isle. I can’t help but notice that we are all decked out in the best equipment which is too good to be true at the start of the game. I’ve even got my black sword from Forge Of Virtue which I could have done with in Underworld 2. 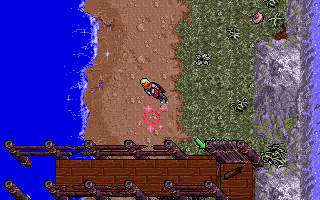 I head off down the shore to look around and a multicolored lightning storm starts. It hits my companions one at a time and they all vanish into thin air. 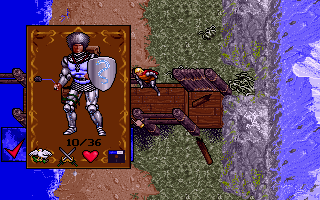 It then hits me as well. I seem to be ok but a quick look at my inventory shows that all my nice gear has been swapped for all sorts of rubbish. I’m now wearing a woman’s fir hat… 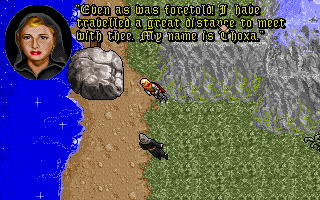 Just down the beach a female monk teleports in . She is about to help me out when she decides to test me with the obligatory copy-protection questions. 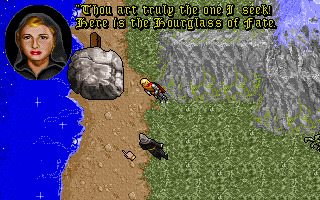 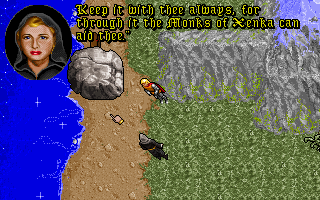 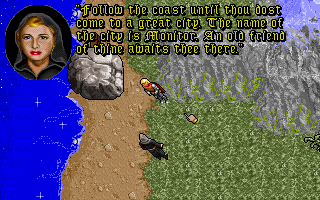 Next, she tells me something about a prophecy where a hero (that would be me) will come and save the land from chaos. Shes short on details but tells me to head to Monitor down the cost where I will find an old friend – one of my companions I expect. 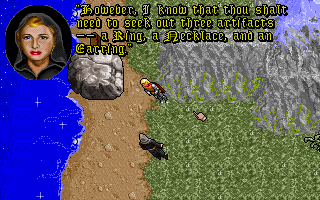 She tells me I will need to communicate with the void (possibly with the time lord?) and will need a ring, necklace and earring to do this. Finally she tells me about a secret cave down in the South that I should look for. 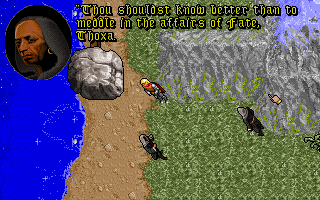 After we are done talking another monk shows up. 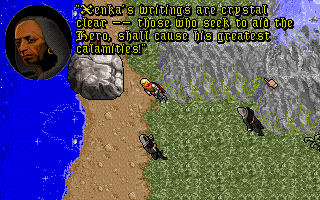 Apparently Thoxa wasn’t supposed to be helping me out.. 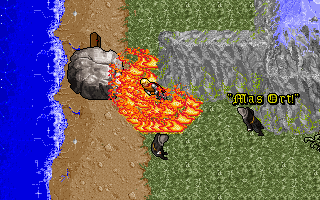 Thoxa surrounds me in fire so I have to keep out of it then the two of them attempt to kill each other. 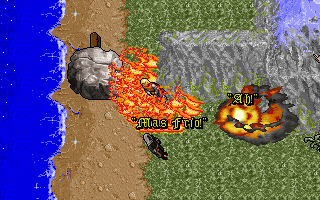 Thoxa looks be out for the count but recovers and fireballs her opponent into submission. 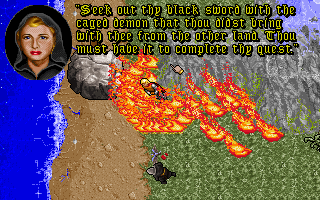 She repeats her clues just incase I didn’t get them the first time and then they both teleport away. 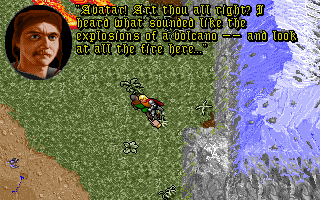 Shamino appears almost straight away having heard the battle. He has also lost his equipment in the same manner but is otherwise unharmed. 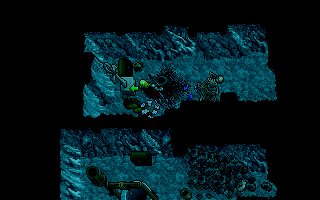 I find the secret cave. This cave serves as a bit of a tutorial with Shamino basically telling me what to do – this is the first blatant in game tutorial I’ve seen in any Origin game so far. Following it through gets me a few weapons and I’m a bit better equipped than before. 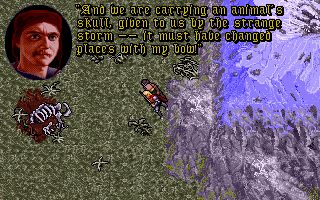 Just South of the cave Shamino spots his magic bow which has swapped for a skull which was in his inventory instead. All the items we’ve lost can therefore be traced if we can figure out where their replacements came from. More than anything, I’d really like my sword back which was swapped for a pumice stone. 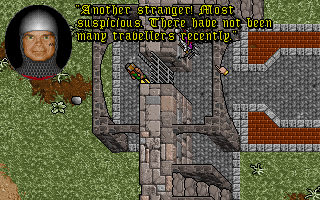 Monitor is just to the East. The guard has never heard of me – we are definitely not in Britannia any more. 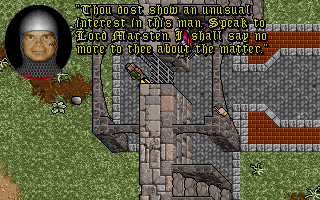 He is still informative and tells me about a magician who appeared in the middle of town and is being held as a prisoner. This definitely sounds like one of my companions. He gives me a little information on Monitor which is the local city of courage. Their chief warrior has gone missing which sounds like a future quest if I ever heard one. 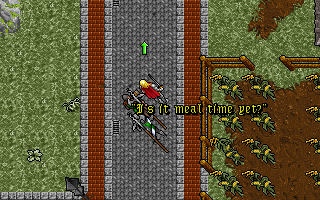 He lets me in but only with a couple of guards tagging along until I’ve gotten clearance.

This is about as far as I ever played into this game before now and its also where I’ve stopped for today. I should have a bit more time to make a real start on this tommorow.