At the end of the last post, I commented about not really being sure what my quest actually was. I thought I’d expand on that a bit first today. It strikes me having played this far that finding Batlin/Gwenno isn’t the sort of quest that RPG’s are made of. Batlin wasn’t enough of a villain to be worth chasing all this time and Gwenno could have just found her own way back for all I know (assuming there is a way back). I never really understood why she went to Serpent Isle in the first place and is chasing after her a good idea when I have no idea how to return myself?

I was given the “hero from another world” speech within about 5 minutes of the start so I’ve really been considering that the main reason to be here. Restoring the balance is more along the right lines as an RPG quest but with no idea how to go about this all I’ve been doing so far is travelling between the towns, exploring, picking up items of serpent jewelry that I’ve been told I will need for some unexplained reason. I also need to find this moons eye thing which not only do I not know why but I don’t even know what it is yet.

If killing off Batlin is my main quest, I could have done with more reason to dislike him to emphasise the need to track him down. In U7 he just came across as an underling of the guardian who wasn’t all that much worse than a lot of the other fellowship members. I know he is up to something in this game with him researching the Ophidians but that isn’t much to go on. I’m about to find out hes up to some serious mischief at the start of todays play. Moving this encounter a bit further forward in the game might have lent the game a sense of urgency.

There have been a few events during the game that have given me some cause to find him but if anything I’ve been given more reason to dislike the town leaders who all seem to have it in for me in one way or another. Serpent Isle is definitely short on benign rulers like LB.

All this is a minor complaint, if its a complaint at all. More than anything else, I’m surprised that I can play the game for this long and still not really know where its going. 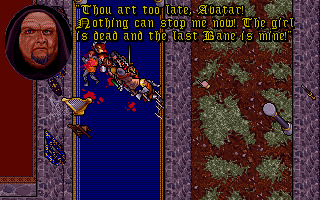 To get back to the game, the backstory I was hoping for in Shamino’s castle fails to appear. There isn’t a whole lot here but I do unexpectedly find Batlin. I wasn’t aware that it was him that had kidnapped her back in Monitor although thinking back to that strange scene in the crystal ball it could have been him fighting the possessed child. I’m wondering now if I should have known it was him at the time and missed it in my hungover state last Sunday. I definitely don’t remember his name being mentioned but this would have given me a good reason to find him. 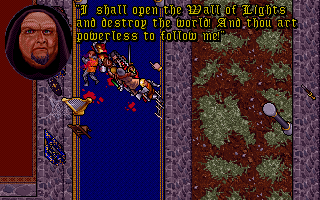 We defeat him and his companions with ease but Batlin does his usual escape act after first threatening to open the Wall of Lights (whatever that is) and destroy the world. 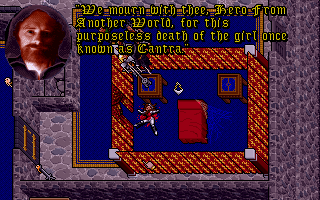 We find the body of Cantra in the castle. A monk teleports in and offers to take to body and even attempt to ressurect her. He tells me not to worry about this in the meanwhile. 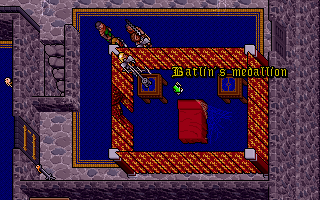 Batlin has left his medallion behind which I figure out later is another item that the hound can use. 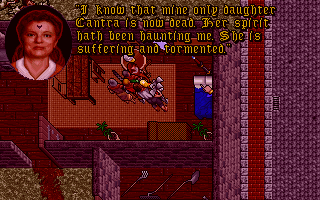 First I head back to Monitor to give the news to Cantra’s mother. 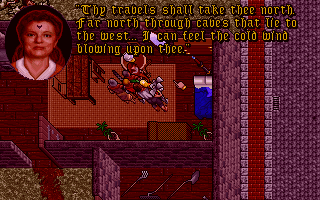 She takes it well and even gives me a prophect that I need to go to the far north through caves to the west – these sound like the ones I found that key in. 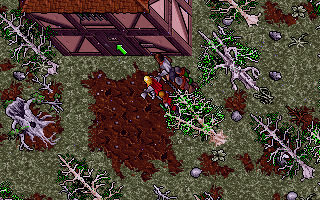 Speaking of the key I head to the woods west of Fawn in an attempt to use it and find the appropriate house. 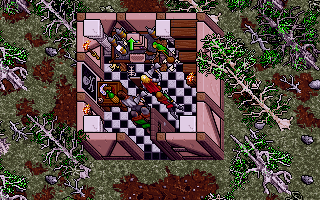 The pirate in here has a PC which looks a bit out of place. He is sat at his desk upstairs and I kill him off as the note requested. There is a bit of money around but nothing too special – I take the PC with me incase it will prove useful but I expect I don’t need it. 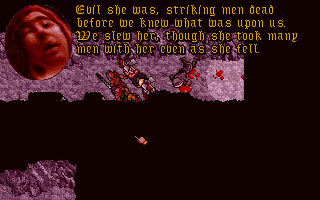 I have to walk back through the swamps again to get to the cave and this time I find I branch I missed. Just before the exit, I run into a man telling me about some evil sorceress he and his men killed. She didn’t leave him in a good way and he dies just after we find him. 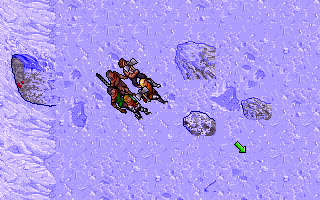 Outside the cave, I’m in a whole new environment of ice and snow. All my characters start to complain about the cold until I kit them up in fur boots, capes and hats. The new environment looks great and it gives the feeling of being arctic explorers. 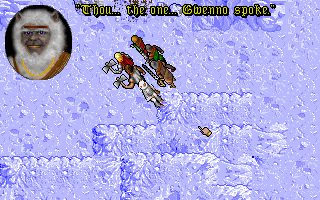 I discover a new race called the Gwani living in caves to the north of here. As ever Gwenno has been here before me. 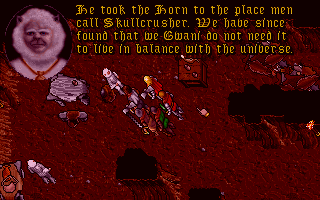 I’m told of a horn that was stolen from the Gwani and taken from here to Skullcrusher and that I’ll need this horn to enter the crypts. 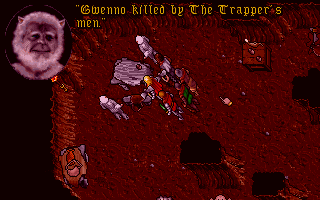 Gwenno did live with the Gwani for a while teaching them English/Britannian but was killed by the trappers men. This is a bit of a shock after following her around for the whole game. This is a world with resurrection however so I won’t give in yet. Her body is in the crypts somewhere to the west but I need that horn to enter there. 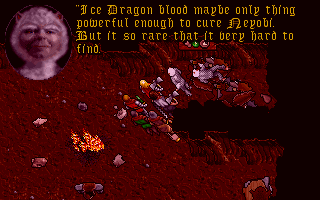 A Gwani child is sick in the village and the only cure is the blood of an ice dragon. Never one to turn down a quest, I volunteer. I’m not sure on the virtue of taking one life for another but I’m sure I don’t have a choice. 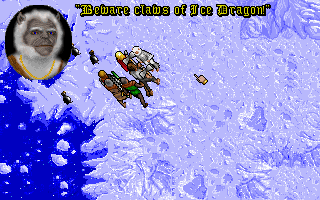 5 of the Gwani hunters have already gone out to try to kill the dragon and only 2 of them are still alive. One of them gives me directions. 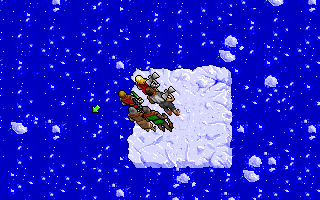 I have to sail an ice raft to the dragons island. 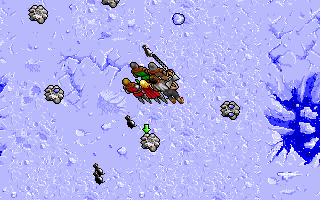 I manage to find the wrong island first and end up on one that is full of penguins. There are loads of blue eggs around so I take a load on the off chance I’ll need them later. 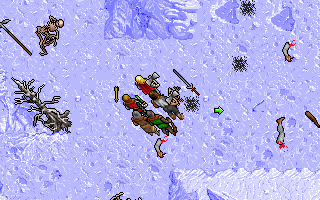 There isn’t any mistaking the dragon island when I find it. 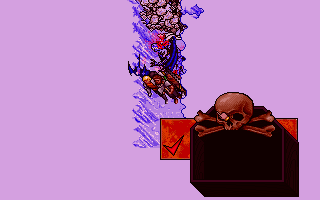 The dragon is much easier to defeat than I expected. I fill a bucket with its blood and head out into the back of its cave to explore. The cave is huge and entirely superfluous as far as I can tell. Its also one of the more infuriating dungeons in an Ultima in that it has teleports all over the place. A bit of careful mapping and I manage to find my way out again but it takes a while. 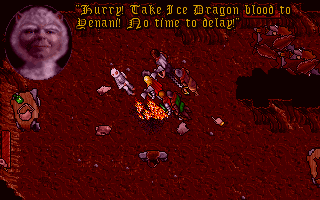 I head back to the village with my bucket of blood. 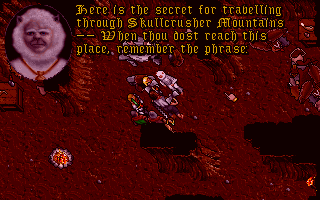 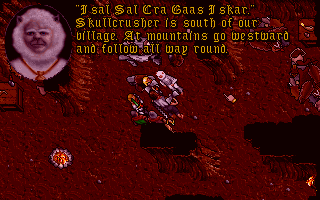 I’ve already been in this cave earlier but came across a locked door. I head back to see if I can get any further this time. 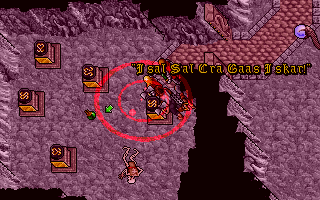 The locked door is still locked but I persevere. The runes lying around match up with the plaques. I figured this much out the first time. What I didn’t know was I then have to double click on each one in the right order. The order is easy enough to work out through trial and error and I manage to get the door open and enter the new dungeon.