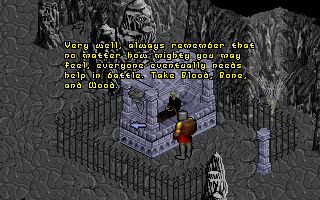 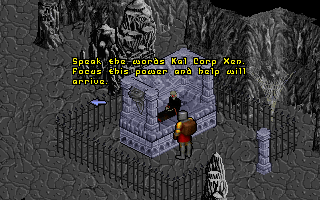 Necromancer #3 is just down the corridor with all the lightning. He gives me a spell to call the dead to help me out in battle. I never used this – I expect it summons a few ghouls. 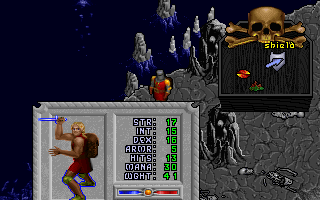 While searching for the next one I find a shield, something I’ve been wanting for a long time. 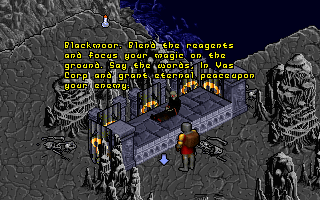 The next spell I’m taught by necromancer #4 is grant peace. I think I can use this to kill ghosts and skeletons but its usually easier to avoid combat in this game (so far) and I haven’t used it yet either. 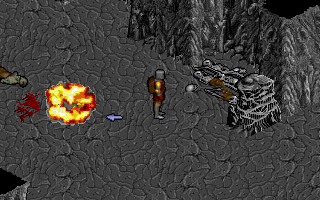 Finding the 5th necromancer proves to be a bit harder. It’s much further to go for one thing but a lot of the areas I have to pass through spit fireballs at me and I can’t stand still for any time at all without being hit. 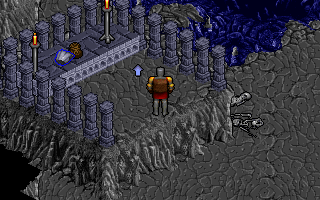 To the south I find some magic armour – guarded by a pit trap. These pit traps are a constant annoyance – they are completely invisible and walking on them means instant death as you fall through the floor to your death. Accidently running into water is also instant death and the monsters can hack me to pieces in no time if I get in the wrong position. I’ve never died so much in an Ultima and I’m having to save constantly – this game really needs a quick save button for that reason. 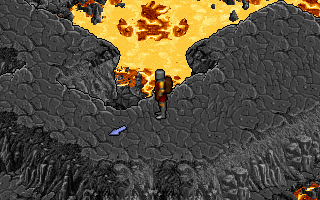 I’m feeling a bit better equipped with my magic armour now – a helmet and gauntlets would be nice to complete the set but I should be better able to cope with combat. I need a longer weapon more than anything else – the range on this dagger is a bit pathetic.

Heading West from where I got the armour gets me to a lava filled area. Jumping onto a particular platform here teleports me to another new map. 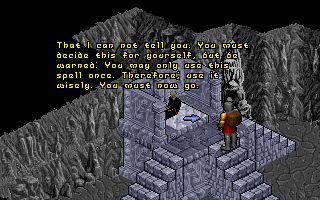 I find necromancer #5. This one teachs me an invulnerability spell of sorts – now this sounds useful. The snag is that I’m only able to use it once…. 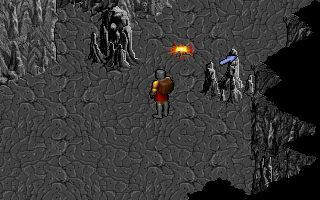 It doesn’t take long to find where I’m supposed to use it. I arrive at a corridor with no way through other than straight into the path of a fireball spitting trap. 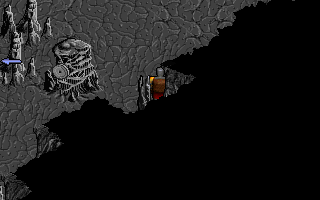 My new spell works and I get through unscathed. 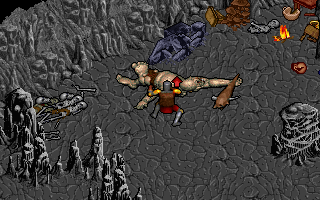 There is something that I’m guessing is a troll on the other side. I’d usually run away but since my spell hasn’t worn off yet I take him out with my dagger. This takes quite a lot of hits but I get there in the end. There isn’t any great reward for this.

In fact the way the stats work in U8, there is no reward for combat at all. My three stats are increased by swinging my weapon, running/jumping, and casting spells as far. It makes no difference whether I’m actually achieving anything though so I could just sit there clicking my mouse for half an hour striking nothing and presumably max out my strength stat. I really don’t like this system at all – the levelling in other Ultima’s opened up new spells as you progressed and rewarded combat. Here I’m best off running away and if I ever need to up mystats for some reason I’ll just click away and increase them. 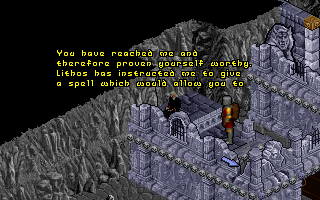 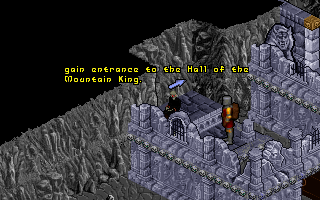 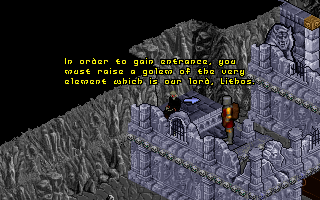 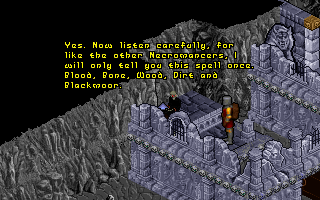 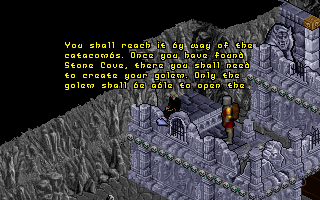 I find necromancer #6 who teaches me the create golem spell. He tells me that I can use this spell to reach the hall of the mountain king and visit Lithos and that I can need to go to Stone Cove via the catacombs. 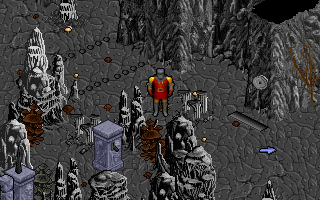 Visiting Lithos sounds like the way to go although I’m a bit unsure as to where I’m going exactly. I follow the steps up to the right of the final necromancer and this gets me back into a catacomb like level. From here I head a long way SW to this area with a few traps and a lever I need to pull.

This area stumps me for a while. Stalactites keep falling from the ceiling and either blocking me in the area with the lever or outside it. Pulling the lever opens up the metal gate but this is no use if I can’t get to it once its open. After reloading 4 or 5 times I manage to get the stalactites to fall in an area that doesn’t block me. I can’t say I’m too impressed with this ‘puzzle’. 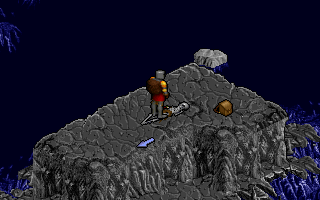 Getting through the now open gate allows me access to a new area which I’m hoping is Stone Cove. I head off to the South exploring and discover an island over a load of floating platforms. This is hidden so I’m looking for something good here but don’t find anything. 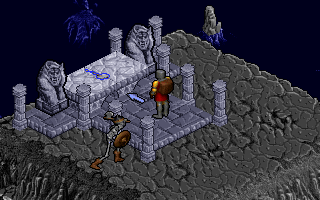 I then notice another larger island off to the west of this one. Getting here is a complete pain. I have to jump across more platforms but they are guarded by skeletons. When I get near they attack – a single hit knocks me into the water and I die instantly. Eventually after a load of attempts the skeleton commits suicide in the water before I get to it and I gain access.

The island has a new magic weapon – an axe this time. I try it out on the skeleton ontop of the raised area and it dies in about 4 hits. This is a huge improvement and should make life a lot easier. 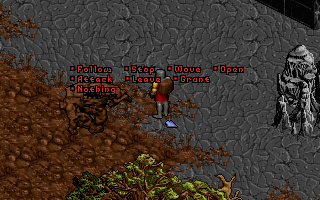 I have to turn round and head back over the platforms from here. Near where I entered back to the North I discover a set of double doors. I can’t open them but there is a highly suspicious patch of earth just below. I cast my new create golem spell on the earth.

My golem springs into life – I can actually give it orders to follow or attack and the like. I order it to open the doors which it does but its too big to follow me through into the next area. 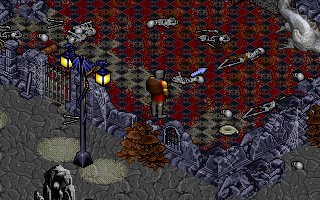 Aside from a hostile golem which I avoid, I find an enclosed area with a throne. The lever doesn’t open the gate but I manage to climb over the wall and take a look around. All I find is a lever by the throne which I pull. I’m instantly attacked by a load of ghouls but this lever doesn’t appear to achieve anything else. 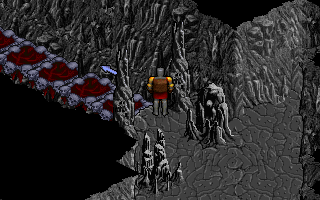 I head back to the south and a bridge appears – I’m sure this wasn’t here before which must be where the lever comes in. This leads into an area with floating platforms that fade in an out in true platform game style. with the patched game this is easy – I expect it wouldn’t have been in the original. 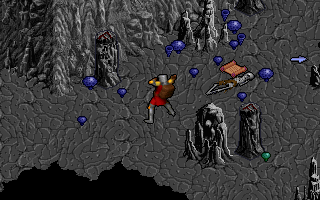 My next challenge is an area full of forcefields – my attempt to get a screenshot here wasn’t the best but they flash blue very briefly when I walk into them. The idea of this area is to throw mushrooms to see where the forcefields are and work through them maze style. I could have done this but the easy option seems to be to just run through, take the damage and then sleep to recover as needed. 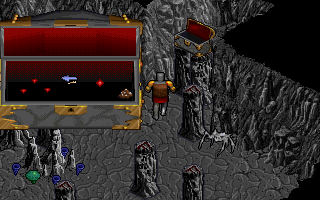 I do this and reach the other end in no time. There is a chest with a key and a few gems. One of the gems appears to protect me from the force fields so that I can just run straight back through them. I passed a locked door just below the maze and the key opens this.

I expect I must be getting somewhere near to finding Lichos now but I’ve no way of knowing for sure. I’m starting to collect a few keys now and would like to collect that keyring Natreg mentioned but I’ll wait until I run out of things to do here, or find a recall pad rather than retracing my steps.

There are aspects of this game that are starting to annoy me a bit. I find myself having to save constantly – this isn’t such a big thing although it would be nice not to have to go through a menu to do this. Every time I save the guardian comes up with one of about 4 phrases and this is getting on my nerves. The ridiculously small rucksack is worse still – I can never find anything. I don’t want to have to shuffle around 60 little icons every time I have to use an item.

Only being able to move in diagonal lines can be a problem, I had one area in a cave where I had to move down a narrow corridor and I just couldn’t get the avatar to go down it. This isn’t helped by the isometric view blocking my view of what I’m doing some of the time. I’ve found the scenery climbing to be really temperamental – usually it doesn’t work and I have to get into a specific position or try over and over before my avatar will climb up a ledge. More than anything, the endless deaths and reloading are bugging me – things like the pit traps or being knocked into the water a dozen times by the same skeleton with the only way through being to wait for it to commit suicide.

I said yesterday that Ultima 8 was growing on me but right now its going the other way again. There hasn’t been any point in this game yet when I’ve really felt compelled to carry on with it. I’m persevering purely because its now the only game in the series I’ve not finished + for the benefit of this blog. It isn’t bad – I’m just indifferent to it. I could make a case for each game in the series being a classic up to this point even including the spin-offs. Things are going to have to pick up enormously if U8 is to live up to those standards.