I managed to rattle through the rest of this game pretty quickly today. There were times I almost wanted to like it but these were brief and there were far more annoyingly difficult areas which stick in the mind. 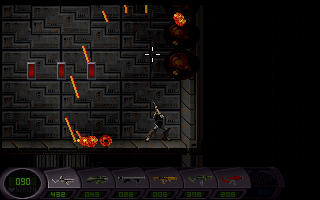 For example there is this section here where I have to simultaneously dodge the shots from about 10 turrets for 20 seconds or so. If I survive I’m rewarded by a dozen grenades being thrown into the room which blow up the floor (and me usually) and I can drop into a new area. I must have tried this about 30 times before I got lucky and managed to survive it. 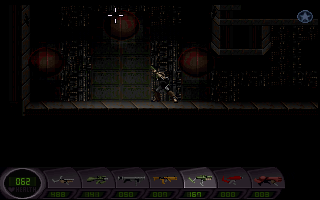 A similarly irritating area is this one where I have to jump back up to the top bouncing on these rocket turrets which spring to life the moment I start. The controls are a little imprecise which means I have to repeat this over and over. I don’t feel like this is down to skill so much as luck which is one of my major problems with Abuse. I end up having to replay bits over and over to get through a section but its not neccesarily because I’m doing anything wrong  and I can only try the same thing again and hope it works this time. 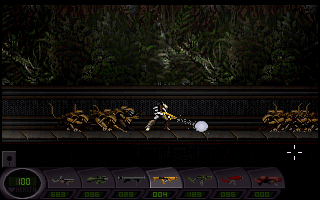 I do see a few new types of backdrop – this is some sort of woody area. 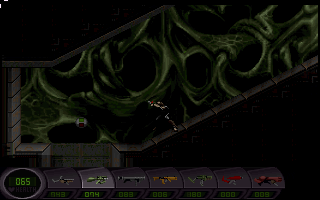 And there is this green alien like backdrop – doesn’t look much like a prison but there it is. 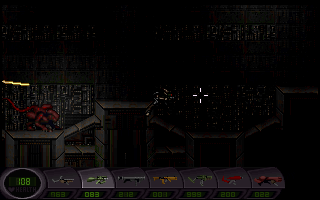 I make it to level 21 and what counts in this game as a boss fight. There are these 2 mutants that fade in and out firing various things at me in the meanwhile. The gun thats assigned to key 6 (whatever it is) kills these off in about a second if I can get close enough so its not too hard once I figure this out. 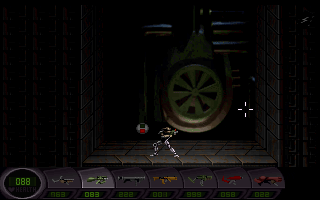 I then have to run through some bombs to reach the ventilation system, turn it on and thats the game won. 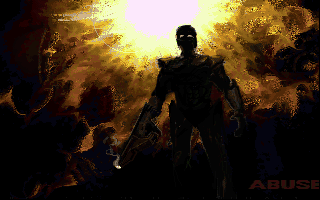 There is no end cutscene, just this picture and a line of text saying I’ve diverted the water supply by pulling the switch.

I’m glad this one is out of the way.  There are some parts of the game that are well designed and challenging but its not one I could recommend to anyone. Its nowhere near as poor as Metal Morph which is in a different league of awfulness but its still down there as one of the worst games in this blog.