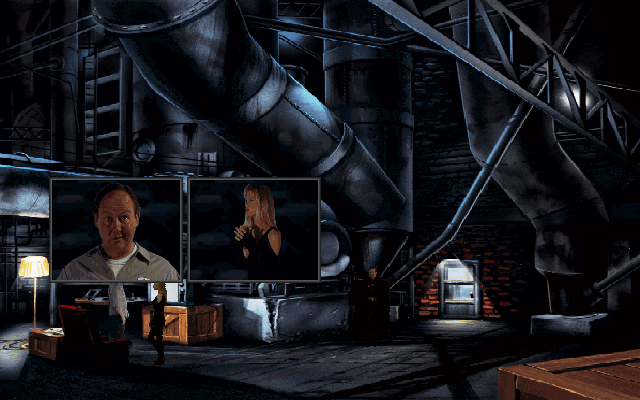 Now that I’ve dealt with the Succubus, my mission for the rest of the game is going to be to look into the mysterious goings on with a new building that is being built in Noctropolis called the Sunspire. This building is going to be so tall it goes through the cloud cover and you will be able to see the sun from the top. I start off my investigations by trying to talk to the boss of the firm building it, which means a load of puzzling to get to see her. In this scene my partner Stiletto has to use her wares to persuade the repairman to turn on the air conditioning, to set off a long and unlikely chain of events leading me up to the top floor and the bosses office.

I said yesterday that the acting wasn’t too bad in the game but this scene falls under the so bad it’s good category and it won’t be the only one from the rest of the game. I always loved the 70’s Batman so I’m all up for some ludicrous comic book dialog with matching acting and there a good few scenes like that in the rest of the game. Watching these two trying to overact each other has to be the highlight though. 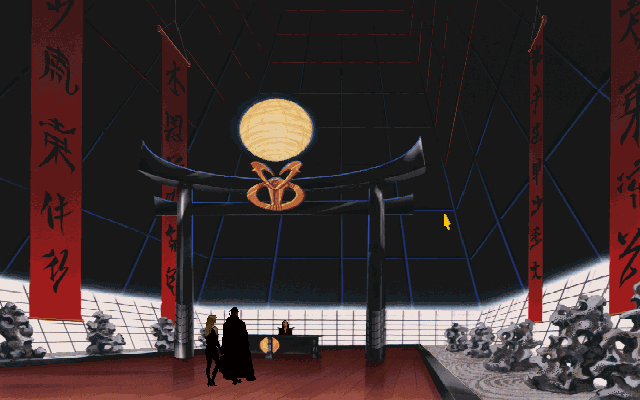 The boss appears to value her office space. I grill her for information but I don’t get much more than a hint to look into the gardens. 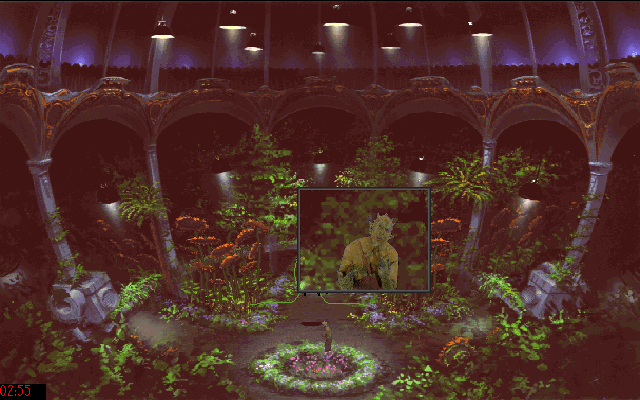 I access the greenhouse with the aid of a glass cutter that just happened to be lying around earlier in the game only to get trapped and stung by a load of mutant plants. This is the 2nd of the villains that escaped from the prison. He was saved from death by plants giving him mutant plant powers in the process (No, I’m not making it up), and after telling me he is on his way to the opera house, he leaves me strung up. I work my way through likely items in my inventory until I find that I can release myself with the liquidark grenade. I’m on a timer again, having been stung, so I go back and heal myself in the liquidark bath. This will become a habit after I meet every villain. 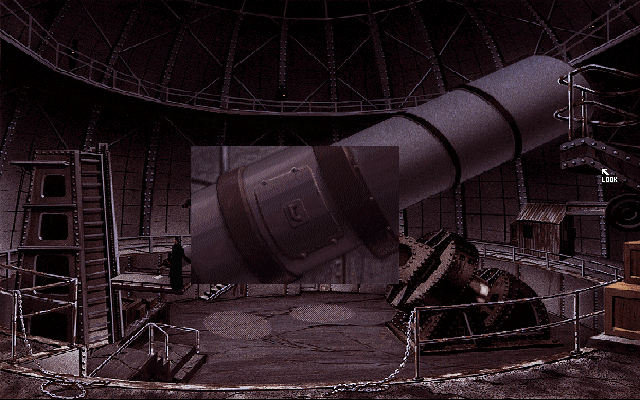 I head to the opera, only for Stiletto to be captured by villain #3, Tophat. She is a theatrical psychopath, who appears to have magic powers judging by the way she teleports Stiletto onto the stage. She uses her as a hostage to force me to get the lens from the observatory, so I head on over there and once again all the items I need happen to be on the floor in plain sight. The snag here is the searchlights that I have to maneuver through but I steal the lens and head back. 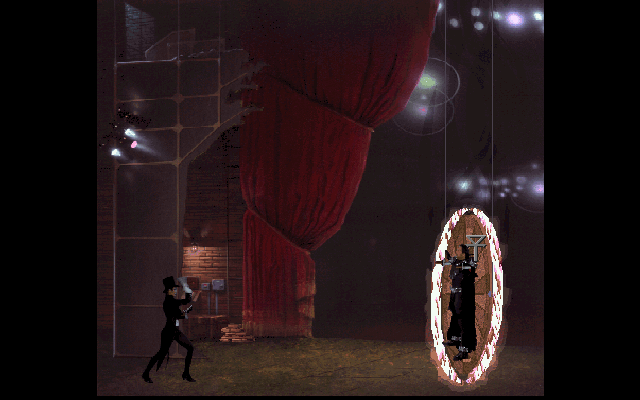 Unsurprisingly, Tophat doesn’t keep the bargain and I end up being knifed on a spinning disk. This game can be moderately gruesome at times like this. I escape and heal once again and after exploring the theatre learn from a group of gang members outside that they saw a butchers van leaving. 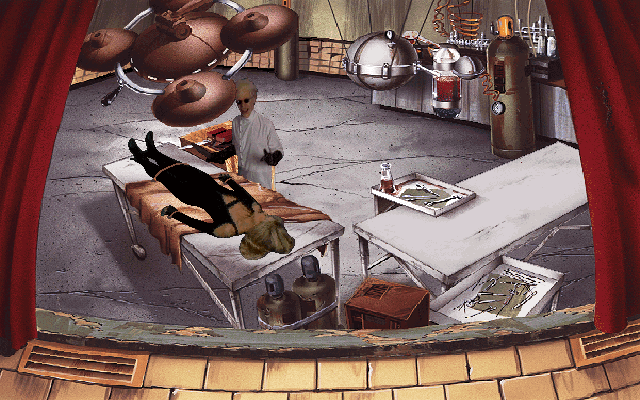 At the butchers, I sneak into the back and find Dr. Macabre operating on Stiletto. I’m just in time to see him slice off one of her fingers and throw it at me. He gasses the room I am in and I end up on the table myself but we manage to escape killing him in the process. 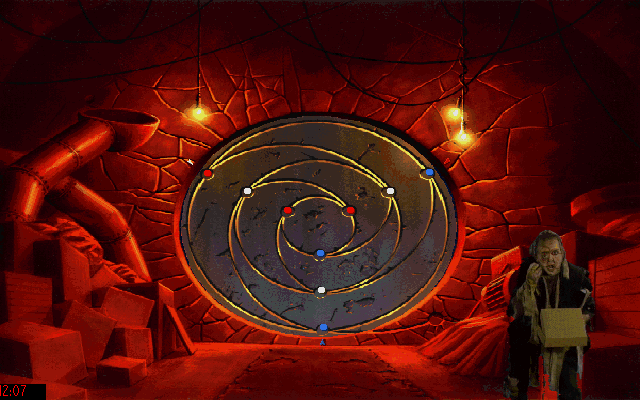 We then have to find our way out which leads through some very strange areas, and even stranger people like this guy who has been deformed by Macabre and is guarding the door. Rather than just setting Stiletto on him, I have to bargain my way past by offering make-up so he can go out into the real world again…. I’ve then got the one puzzle in the game behind him where I have to get the dots lined up by colour by moving them around. This takes a while, but I escape in time to heal myself once more. 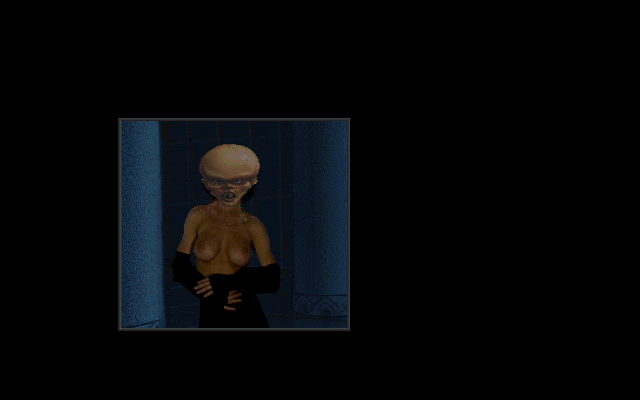 When I’m healing there is some FMV where Stiletto starts to undress only to sprout a new head. The final villain called the dreamer has trapped me in the dream world with his evil telepathic powers and I’ll need to escape. We always have to get an obligatory breast shot in these “adult” FMV games I’ve noticed. I can only conclude that game developers, given the opportunity always make sure there are a few scenes like this. 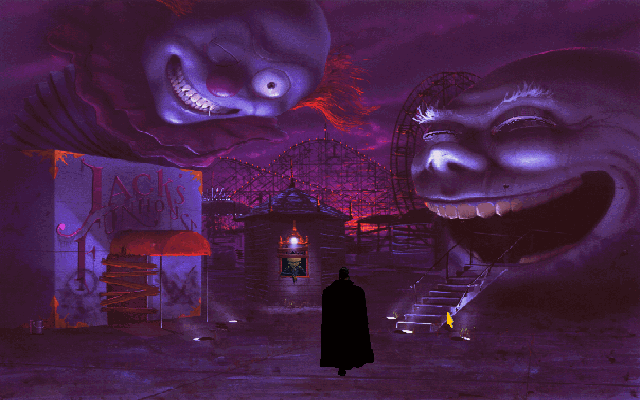 The dream world is possibly the most interesting section of the game with a creepy fun fair to look around. 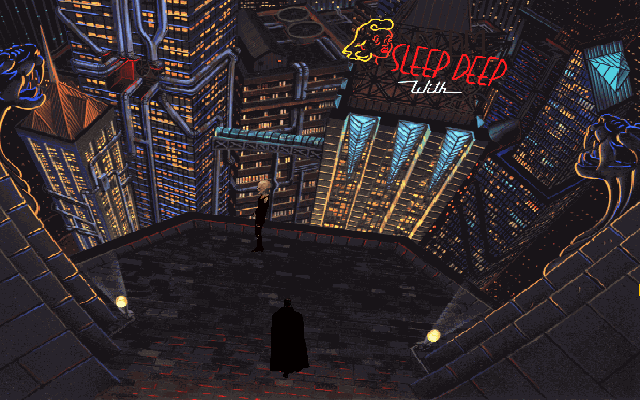 Through a somewhat convoluted set of puzzles, I end up at the top of a tower and meet the Dreamer again. He pushes me off the building only for me to die at the bottom waking me from my dream. 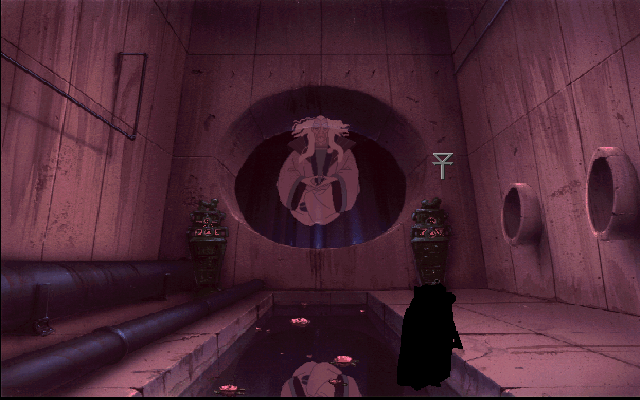 From here it’s back to talk to the woman in charge of building the Sunspire, who finally sends me to meet her boss who is known as The Whisperer. This guy hangs around beneath the building and looks somewhat out-of-place as a cartoon, but is supposedly an elemental. He actually wants to help me stop Flux and tells me I need to get to the top of the Sunspire building. 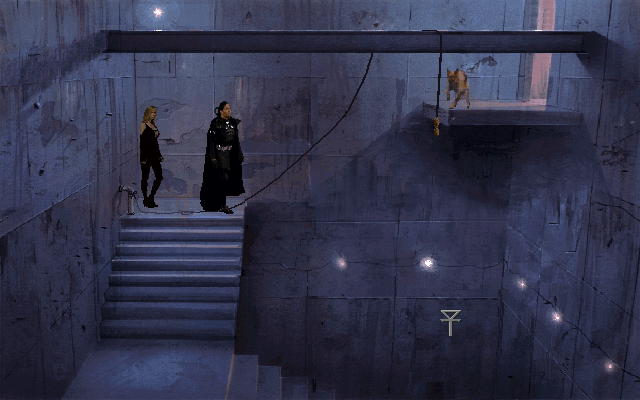 I make my way there, picking up an unlikely series of objects in passing. Some of the puzzles in the game are just silly and it’s a good job the item interface works the way it does or I could have been stuck for days. For instance in this room I’m supposed to know that to get rid of the guard dog on the platform, I need to use a rope with a sausage and then use the rope on the little pipe. The dog will then jump for the sausage, plummeting to its death while also pulling the rope further around the girder in the process. I can then use my meat hook, stick & duct tape together creating a hook on a pole to snag the rope and swing across to the platform. Rather than having to figure any of this out, I just try to use the sausage and the game decides to use it with the rope, then I use the new item and it decides where and how. Using the meat hook has the same effect. I’ve never played an adventure game that didn’t require you to know what you were doing with your items in this way. It does take a lot of the adventuring away from the game and turns it into an item/location hunt. 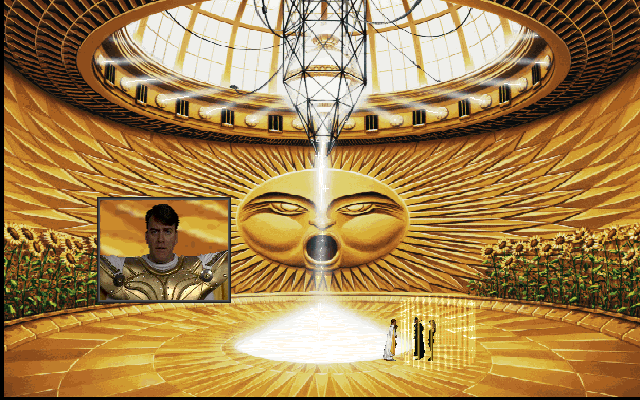 At the top of the tower, in a ludicrous Flash Gordon suit is……..Darksheer. Like I didn’t see that one coming within 5 minutes of starting the game. He is now calling himself Lumasheer and is using the power of light instead of dark. It turns out that my whole quest was a ruse to keep injuring me and getting me to heal myself, thereby getting the liquidark to run through my blood. He can then use my blood with his liquilight to form a new substance called the Quintessence Of Light which will make him all-powerful.

In the games final puzzle I have to use the other token I got to send the new substance to my world. At this point, a figure from the Brotherhood (who taught Darksheer about liquidark in the first place) appears from nowhere and chops his head off. He apparently couldn’t interfere until nature itself was threatened which is why he only showed up in the nick of time. I now get to be the new Darksheer and guard Noctropolis from future threats. 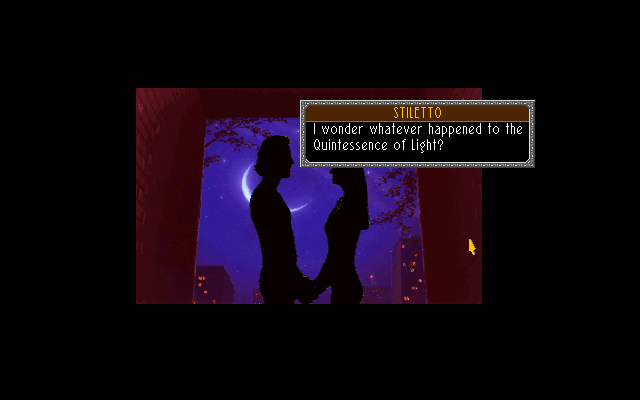 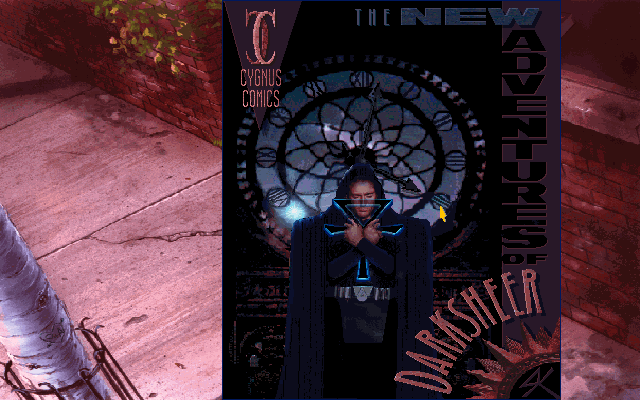 Back on my world a new Darksheer comic book mysteriously appears and the game ends with many outtakes from the filming which are for the most part less amusing than the takes that did make it into the final game.

I’ve skipped most of the puzzles here. If you really want to see the whole game, there is a full playthrough already on Youtube. I’ve thoroughly enjoyed this game and it’s one of the better FMV efforts that I’ve played but I’ve seen plenty of better designed adventure games. Large portions of the plot and dialog are ludicrous but it gets away with it through not taking itself seriously, although it contrasts this by being quite dark at times with some of the subject matter and situations. The biggest problem I have with the gameplay was hunting around the screen for some of the items you can pick up. Most items stood out against the background but several were indistinguishable. Other negative aspects were that I did feel like I was just carrying out tasks for the sake of it a lot of the time, with no real idea why until after I’d done it. You could level that criticism at a lot of adventure games but this was worse than most. It’s also not the longest of games.

So that’s the final day of Origin games, at least until I discover another game or decide to give Ultima Online a go. It was a fun game to finish on even if it wasn’t actually done by Origin. From here on its book reviews and some of the remaining games from fans and Origin developers. As far as games go, the ones I’m definitely going to be playing are Lazarus and it’s Ultima 6 equivalent (these 2 are top of the list), Arx Fatalis, Netstorm, Starlancer and Freelancer.