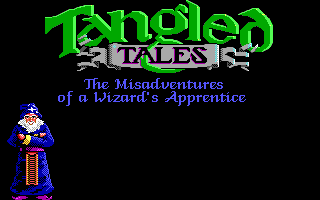 I restarted Tangled Tales. Much like Knights of Legend there is no sound whatsoever in the game. I presume this is in the DOS version only. The graphics are bright and colourful however which makes up for the loss of a few PC speaker beeps. 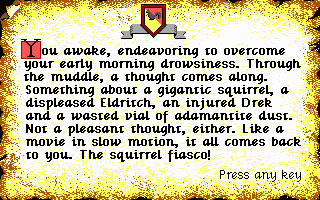 There a few lines of text to introduce the story. 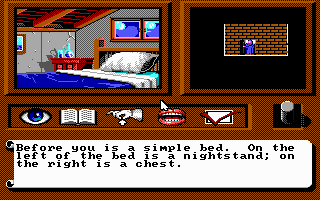 Then the game itself starts. The adventure game style play comes in right from the start here. You have to example all the objects in your room. Open the chest, drawers, etc and pick everything up. This gets me basic equipment which I equip in RPG style however, such as a staff, leather armour etc. 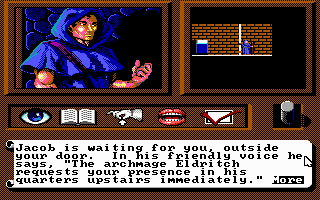 As soon as I step outside I meet the games first NPC Jacob. All conversations show a portrait like this and I have multiple choice actions from a list in the bottom window. 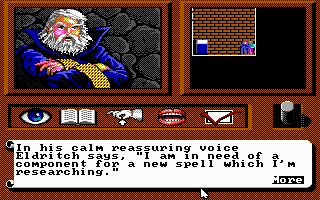 I find Eldritch and he gives me my first quest which is to locate a spell component.  Eldritch’s house consists of about 5 levels with several people to meet. Stepping outside there is a small town to walk around with a couple of pubs, shops and the like all of which have people to talk to in them. 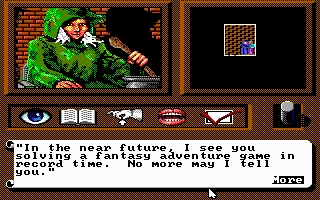 I have a quick look round the town but decide to head outside for a look at the world map. The map is very small, probably no more than about 40×40 tiles. The nearest location is a hut, I knock on the door and find a witch inside who doesn’t give me any useful information.

Just near her is a rabbit, trapped in a cage. Freeing this rabbit, it turns into a dryad who rewards me with some apple seeds, which I plant in a nearby garden. I also discover a tree with a vine attached which I climb down into my first dungeon. 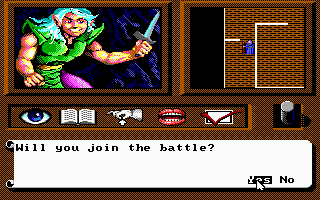 There is an elf in battle with goblins in the dungeon. We kill off the goblins together and he joins my party. The battle consists of no more than clicking on attack a few times. 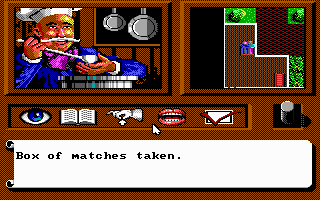 I have a look round the town now. There are a host of people and little quests to complete here. These include coaxing your fellow student out of his room by giving him a flyer advertising a sale at the magic shop. This gets me a chance to look round his room and learn another spell. This is in my book the sort of puzzle I’d expect to see in an adventure game. Theres numerous other similar puzzles in town. By going into the bucket shop with Alvin my elf companion I blag a free bucket. This is used in another series of minor puzzles to collect honey from a tree full of bees, which I can then use to entice three bears out of their house and sneak inside. 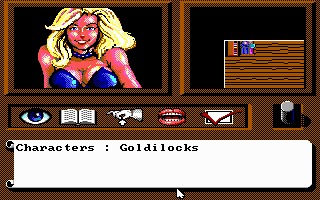 Inside the house I run into Goldilocks who joins my party so we can steal the 3 bears treasure. The treasure to her disappointment turns out to just be a scroll with another spell on but she stays in my party for now. 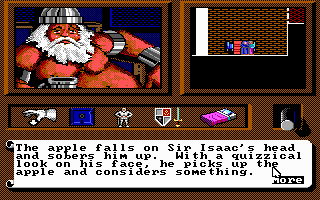 Back in town I take an apple from my newly grown trees, drop it on Sir Isaac who is hanging around in the pub and for some reason it sobers him up enough that he decides to join my party also. Now he is in my party, I can also get another bloke sleeping in the pub next door to join my party. 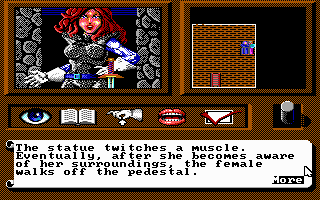 The world map has a giant boulder on it, that I’ve been unable to move up to this point. Now I have a big enough party we push it and reveal another dungeon entrance. There is a stone statue inside, which I pour my unpetrify potion on (bought from another student wizard) and it turns into Jennifer who joins the party too. 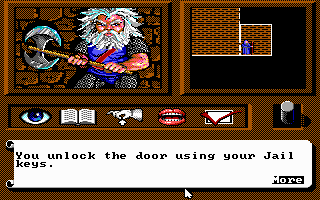 This dungeon turns out to have some much stiffer fights in than some of the previous ones. So far my only strategies have been to cast heal or attack but I do build up a small arsenal of spells including offensive spells like energy blast by this point. My spell points don’t last long in dungeons as I have to cast light just to see anything. I can sleep to get them all back however so this isn’t a big problem. There is no food in the game so you can sleep as much as you want and never starve or the like. There is the chance of running into monsters but this hasn’t happened often while I’ve been playing.

I find a set of jail keys in the dungeon and set about freeing all the people in it. Sneezy the dwarf joins the party at this point. 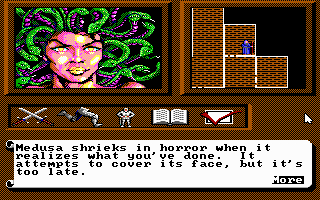 In another cell I find Medusa. Fortunately I picked up a hand mirror in my room right at the start of the game. I use this and she turns straight to stone. Eventually I run into a dead end in this dungeon. 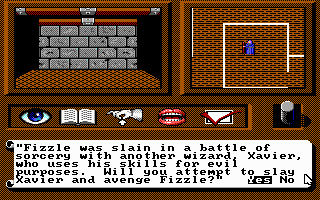 There is a pool at the northern end of the map which I swim through to find yet another dungeon. I find some diamonds in here, as well as someone who makes me promise to kill the wizard xavier (whos dungeon I was just in). I turn the diamonds into coal by dropping them into a pool in my masters basement, head back to xaviers dungeon and eventually after a series of puzzles make my way through to find Xavier himself. I can’t seem to kill him so I run away find a vial in his room and a portal which takes me back home. 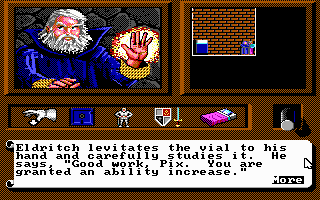 The vial turns out to be the ingredient Eldritch was after and thats the first quest complete. I’ve skipped about half the puzzles in the game (and all the combat) but I hope this is a reasonable overview of the gameplay. Combat takes a very backward step to puzzle solving here. I died quite a few times in combat but I just end up back home again and its a short walk back to wherever I was with no harm done. There are a whole stack of strange puzzles, none of which are unfair as such since there are always clues given but don’t neccessarily make much sense.

All the characters in the game are quite chatty so the game has a bit of character if little real plot so far. Each quest is supposed to be harder than the last so I’ll see if the next has more depth. Xavier is still alive also, so I may go back and try to kill him later when my stats are improved. 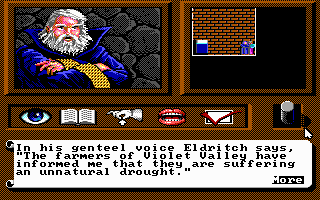 Eldritch gives me another quest to cure a drought in Violet Valley. Its a quick step through a portal in the room next door… 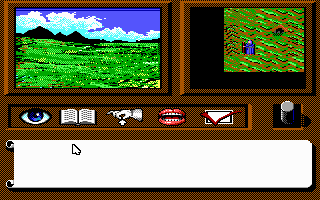 and I’m in the valley (after a tiny little dungeon to start). My party can’t come through the portal so I’m on my own again. Aside from being able to carry over any spells I expect the quests and pretty much standalone although there are objects I haven’t found a use for in the first quest so I may be proved wrong.