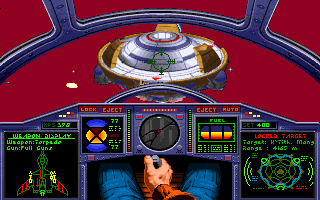 I had another go at the final mission tonight. It took a few attempts but I finally managed to clear all the fighters. After this the base is a sitting duck – its just a case of retreating, locking a torpedo then closing in to fire it. 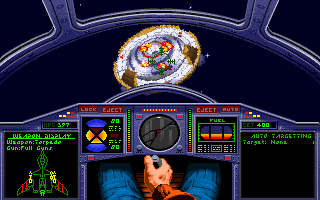 Two torpedoes later and it blows up. 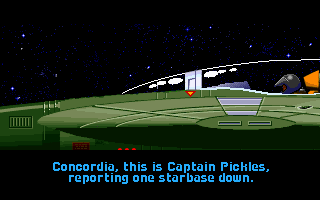 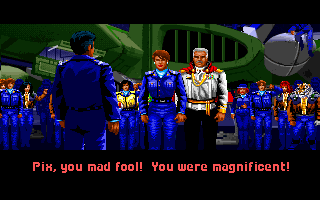 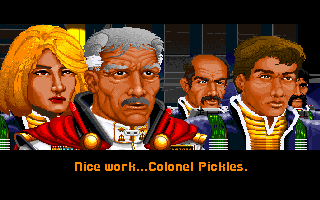 The end sequence kicks in – its surprisingly brief given the length of some of the other cutscenes – the admiral finally decides I’m not that bad after all and promotes me to Colonel and the end credits come on. This could be the first of the games that actually had end credits – I’m struggling to think of another anyway. I suppose movies have scrolling credits at the end so Origin followed suit. 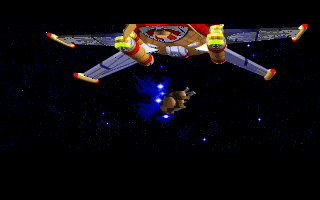 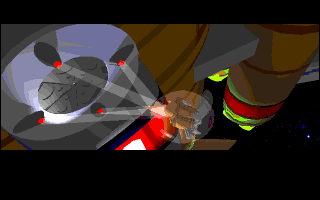 For anyone who sits through the credits there is a final cutscene where the emporer floats by vowing to return and gets tractored in by a Kilrathi ship.

I’m less impressed than I thought I would be with WC2 really – the plot was just too trite and predictable and it didn’t give enough new over WC1 most of the time. Its fun in a mindless sort of way but this is my 4th Wing Commander game in 2 or 3 weeks and I could do with seeing something new other than a few cutscenes. I remember it far too well also from playing it years back so I knew what was coming the whole way – a lot of the fun the first time round was just following the plot along, corny as it was. I’m much less familiar with the mission packs so hopefully they will spark my interest a bit more.