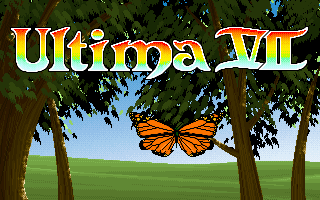 Ultima 7 marked the start of a new trilogy and for me at this point on I’m pretty unfamiliar with all the Ultima games remaining. I’ve attempted to start Ultima 7 a few times but the sheer size and complexity of the game is quite daunting and I’ve never made it very far at all. Having played through the whole of the series to get to this point I’m feeling much better prepared this time but I’ve noticed similar problems with the other Ultima’s in that it usually takes a few hours for me to get into them. 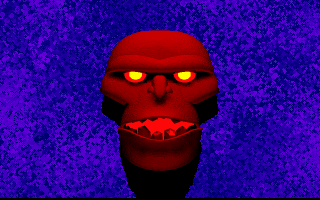 At the start of this game the guardian introduces himself by popping out of my screen. For once the voice acting isn’t actually too bad as its not being done by Origin employees. He doesn’t exactly threaten anything but seems to want to be in charge of Britannia & me which can’t be a good thing for a scary looking giant red head. 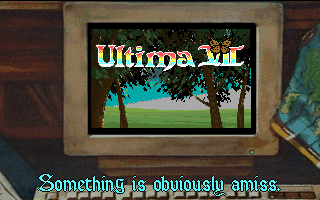 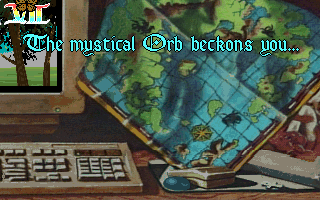 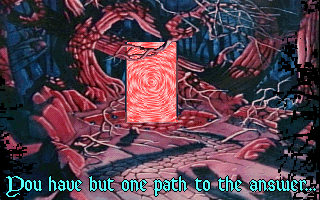 A moongate is ready and waiting to take me to Britannia without me using my orb. and I step through. This is actually a pretty brief intro, nice enough but shorter than I’ve been getting used to. I expect the disk space was needed for the game itself. 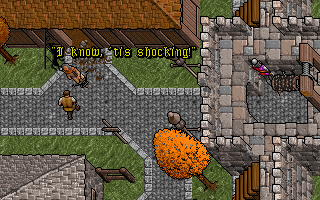 The character creation/import has gone completely. I just choose a name and sex and jump straight into the game. 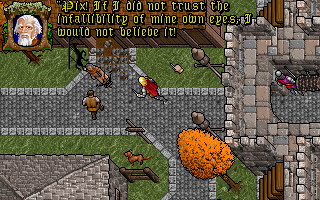 I pop through the red moongate and bump straight into Iolo. He is investigating a murder but since I’m here I get to take over. Its been 200 years since I was last in Britannia because of the timeline difference so hes looking a bit older. 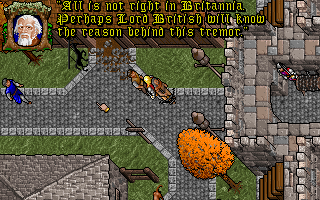 Theres also an earthquake and Iolo suggests going to see LB. This is to do with the Forge of Virtue expansion which is already installed. More on that later. 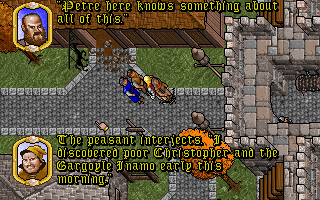 The Mayor shows up and also asks me to look into the murder. I agree to do so. 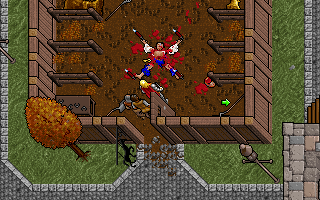 I walk in the building and the roof pops off to reveal a grisly sight. There is a key on the human body and also a wingless gargoyle pitchforked to the back wall. 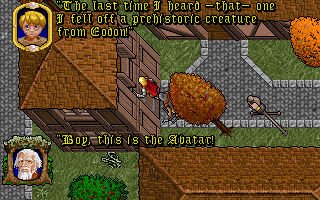 I walk round town talking to everyone about the murder. Not everyone believes I’m the avatar it seems. There is also a new philosophical society called the fellowship who seem a bit overkeen to recruit new members. The murdered man had a son who I find at the NW of town. 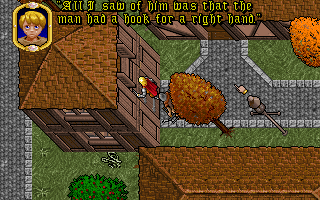 He joins the party so he can help find the murderer. 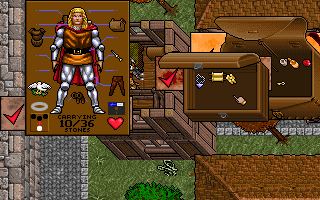 I should talk a bit about the new engine/interface. There is no visible interface to the game and the entire screen shows the map. This is certainly more immersive and the improvement in graphics is huge to go with it. The view feels quite zoomed in compared to other games and I’m not sure I wouldn’t prefer to be a bit further away but it still works really well.

The inventory screens pop up when I double click on myself and then other characters. I can double click on stuff in the world to use it also. It all works well but can be a bit slow to navigate through at times. There are no slots in the packs either so I end up having to move stuff around to find things which is a bit of a pain.

To move round the world I move the cursor and hold the right mouse button. The other recent Ultimas has this feature but I was still using the keyboard. I use pretty much nothing but the mouse here.

The interface works well all-in-all. It has a few quirks but is well ahead of anything else I can think of from this era and graphically scaled up with the HQ3x driver this still looks pretty decent by todays standards.

In Sparks house I find a chest which opens using the key on his fathers body. There isn’t much in it, a scroll, a fellowship medallion and a bit of money. 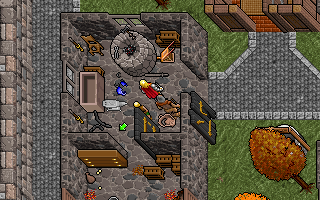 The murdered blacksmiths smithy is down at the SW of town. When I go in stuff starts moving around and I hear the guardian laughing.  I didn’t find anything useful which can’t help but make me think I missed something. 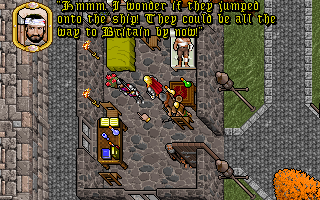 There is a guard at the healers who got hit on the head after the murder. It appears the murderers fled to Britain. 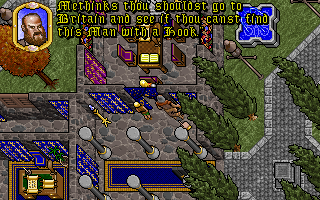 After loads more questions, it seems the murderers were a man + gargoyle and the man had a hook on one hand. They fled on a ship called the Crown Jewel to Britain. I report all this to the mayor and he suggests going go Britain. Until now, I’ve been locked inside the walls at Trinsic but after answering some annoying copy protection questions he gives me the password to get out again. 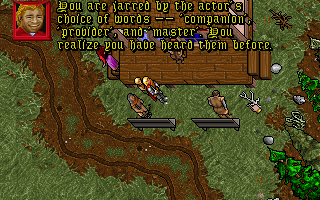 I think this is probably about as far as I ever got on Ultima 7 before now. I may have had a look around Britain, been put off by the sheer size of it and never gone further. If anything this game has been easier to get into than any of the ones before it so I’m not sure what the problem was but I haven’t looked at this game in a long long time.

Just outside Trinsic is a stage where we watch a really poor play on the virtues of the fellowship. At the end they use the same words as the guardian clearly suggesting a link somewhere. 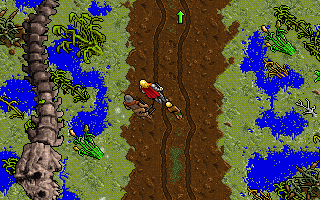 I carry on walking to Paws through a swamp complete with a giant skeleton. These swamps are fairly garish colours to say the least. 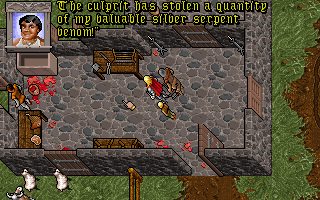 When I get to Paws there is another crime to clear up. Some serpent venom which can be used to increase strength temporarily has been stolen from the man at the slaughterhouse. I agree to clear up the crime if I can, so Britain will just have to wait for now. 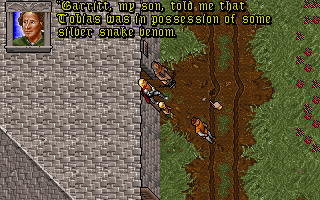 I ask all around town. The fellowship runs a shelter here and they all seem to suspect the son of the farmer (Tobias). The morals of these fellowship types seem pretty questionable. They are running a shelter but won’t actually help people who aren’t members. One of them tells me they have caught Tobias with evidence. 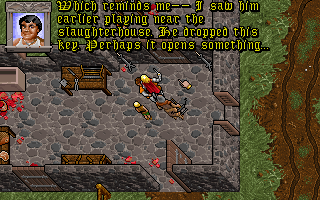 The man at the slaughterhouse thinks its more likely to be the son of the fellowship hall owners who is the culprit as he has been showing symptoms of using the venom. He gives me a key and I search the chest at the end of his bed. Sure enough I find the venom. 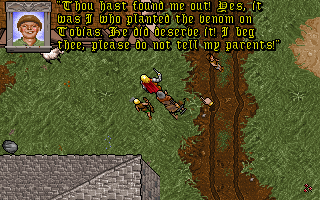 I confront him with the evidence and he confesses to framing Tobias. 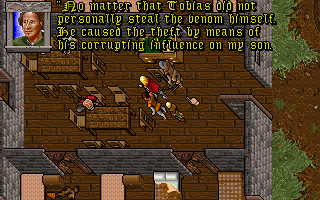 His Dad still blames the corrupting influence of Tobias. These fellowship people are definitely bugging me now – they seem to operate like some sort of masonic society where they help out their own members at the expense of everyone else. They definitely aren’t following the virtues as far as I can tell. They all give the exact same speech and ask me to join all the time as well. At least with the murder solved I can get out of here and find LB. 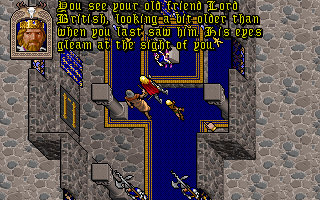 Britain is fairly huge to say the least. I ignore everything and head for LB’s castle. At this point I take a sidetrack to have a go at the Forge Of Virtue addon before going back to the main quest.