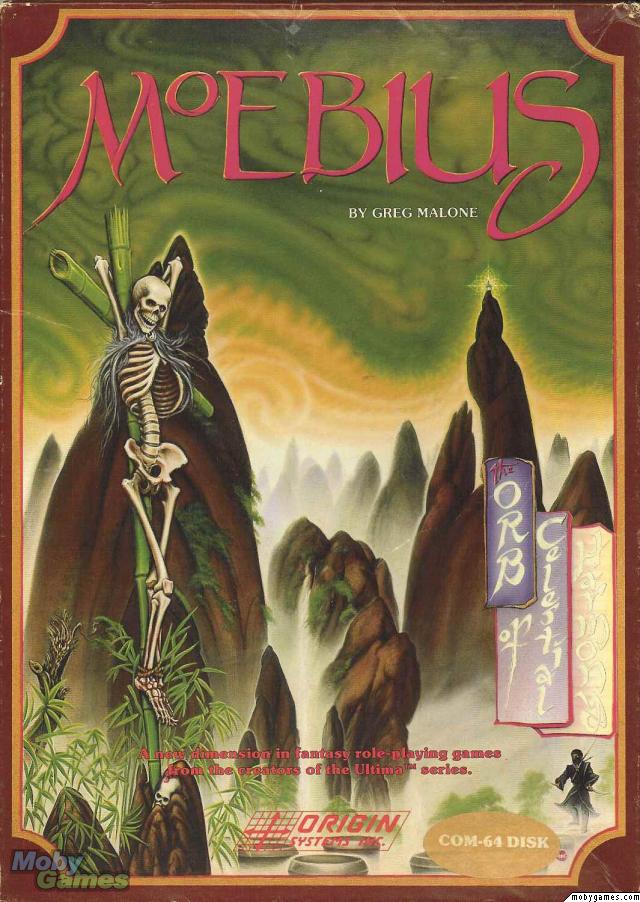 This game came out in 1985 for Apple 2 and was created by Greg Malone. It’s an unusual blend of RPG and martial arts which used motion capture for the fighting sections. Very briefly, the back story goes that Moebius aka The Windwalker, went into the four planes of existence and trapped the four element spirits inside a shard of crystal to create the orb of celestial harmony. He had to invest so much of himself to do this that he can now only exist inside the realm of air, hence the name windwalker. One of his disciples has stolen the orb, and taken it to the realm of fire. The land and weather are corrupted, you must travel to the realm of fire and defeat him.

On starting up their is a brief graphical introduction to set the scene, told by Moebius himself. Once this is over I create my character. Before the game lets you start you have to train in three disciplines.

The first of these is unarmed combat. The controls take a little getting used to. You have two left and two right keys, one of which moves you quicker than the other. There are also three punch, and three kick keys to aim at the head, middle or legs of your opponent. You can block with space. Low blows seem to hit way more often against everyone except evil priests who need kicking in the head.

This is the armed combat training. The same strategies seem to work here also.

This is the third discipline – divination. This just consists of stopping the little ying/yang from moving out of the box. This is used in the game to get spells after you return priests to shrines. The controls are odd again – the game doesn’t use the standard cursors but instead uses the eight keys around L. I’ve played a good 3-4 hours of this today and still can’t get used to it.

This is what it looks like when you start the game proper. I’d say there’s a bit more detail than in the U3 graphics. All the characters are represented by their top halves, which looks very odd. However, it does mean you know what you are fighting. The little ultima stick monsters, all look pretty similar so it gets around that.  The tiles also overlap a bit, i.e. a tree on one tile can stop you seeing the one behind it. This gives a mini 3D effect but given the amount of time you spend hacking through shrubbery in this game it would be nice to be able to see what was there. Often I end up trying to hack through a rock and blunting my sword because I can’t see it.

All combat takes place on screens exactly like the training ones shown above. At the start of the game, I’m hitting for 1 damage every time and winning fights is hard work.

When I do level up, Moebius appears and I get a little haiku about an animal as above. There are 6 of these for each realm. I immediately started to do more damage as soon as I leveled up and the game became a lot easier. Because of the arcade nature of the fighting though, stats are less important than a conventional RPG, however bad they are you can always win if you can play the arcade section well enough.

You have to play through each of the four realms (earth, water, air, fire) one at a time. In each realm you must kill the overlord, rescue 2 priests and take these two priests to two shrines to cleanse them. Once thats all done there is a teleport to take you to the next realm. There are only 2 monsters you will commonly face, assassins and palace guards. There isn’t much difference fighting either. The temples are guarded by evil monks – if you attempt to fight one of these with your swords they melt it so you always have to fight them with your hands. These are much harder to kill than other enemies.

Running out of food and water are the biggest threat in the first couple of worlds. You can get water from cisterns dotted around sparsely on the maps. Food can only be gained by killing people.

By the time I get to the 3rd world, the novelty of this game is wearing thin. All the fights can be won using the same strategy and are very easy once a monk has blessed your sword. Despite this its still very slow going, you can’t just walk anywhere, you have to chop trees down to get through and the fights keep coming constantly. So far there’s no plot and nothing new. The second zone was just more of the same.

The air world has at least added some new elements. There is a demon that shows up at night, which just before dawn turns into the minstrel. If he catches you at night you get seriously hurt and your karma goes right down (which stops priests following you). From hints in the game and the manual, I have to catch him as the minstrel while wearing the amulet. There are observatories on each level which give you a map of the area – I find the amulet at one of them.

This is the minstrel who gives me an artifact, which after divination turns out to be a were-spell. I will need this to get to the exit teleport assuming I can find some condor feathers tommorow.

After a few hours on this game today, I’m not massively impressed. The graphics are definitely good for its day and the fighting element is a completely original idea.  There are the elements of a decent game in there but it is just too repetitive and too slow. This game is at least as big as Ultima 3 was but there just isn’t enough there to keep it interesting. I’ll stick with it anyway and look forward to Ultima 4 when I get it finished.