I’ve spent a good couple of hours on Privateer tonight but this will be a short post as I was pretty much just grinding away earning money. It took next to no time to get my ship up to a decent level where it was a definite improvement on before. I spent a bit longer just repeating similar missions in the Troy system then decided to try out a tip I saw on the web. 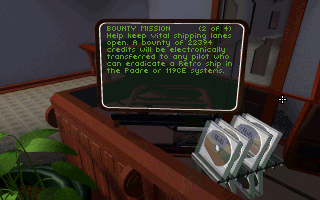 The tip was that if you base yourself at the Padre base you can take bounty hunting missions which pay well and only have to traverse 6 nav points in the 2 systems to beat these missions due to the isolation and small size of the padre system and its neighbour. I fly off and sure enough the merchants guild has one of these missions paying a whopping 22000+.

I literally just have to take off, shoot down one ship and land to collect the money. I repeat this a bit and while I tend not to get quite so much cash each other time and have to fly through the nav points its still easy money. 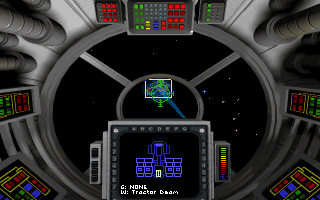 Some of the ships in this system also drop cargo which never happened to me earlier. This tends not to be worth much but its easy enough to tractor in. I’ve got my ship nearly fully equipped now. I’m about 50000 short of a level 5 shield generator and that will pretty much finish this ship. I may upgrade the guns I’m using which are the 3rd most expensive also depending upon how much power I’m left with when I get the shield generator. Its so easy making money in this system I’ll probably stick around until I’ve got a fully equipped Centurion and then pick up the plot again.