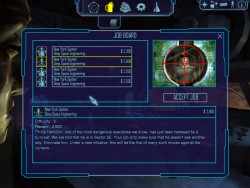 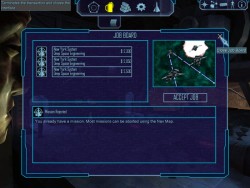 My first task today is to head to the bar and have a look for jobs. I was curious to see what was on offer but it’s frankly a boring bunch of missions all of which amount to fly somewhere and kill rogues. Hopefully there will be more variation later in the game. I pick the highest paying option and accept it. It then turns out I can’t even fly several missions at once which was always a favourite technique in Privateer to speed up progress.

Once I launch into space it’s a long flight to the battle. Travelling large distances is handled using cruise engines in this game which take ages to charge but quadruple my ship speed when they are going. I can’t fire in this mode making them more or less useless in combat unless running away.

Even with these switched on, journey times are still lengthy and with it all being done by autopilot there is plenty of time to check email, browse the web, etc… This is clearly a game where it’s a good idea to have something else on the go at the same time.  It took me a while to find where I’d put it but I’ve pulled out the Freelancer official guide which I’ll work my way through in these lulls.

When I get there, the battle is more or less the same as I’ve seen before with an extra ship or two then it’s back to the base where I get a near identical mission from one of the people in the bar. Completing this advances me to level 3 and I’m told to report to Manhattan to meet up with Juni again. 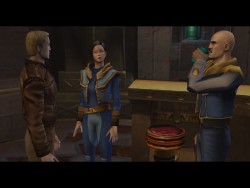 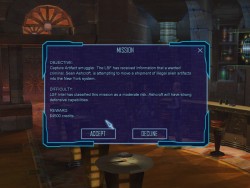 My next mission, should I choose to accept it, is to capture an artifact smuggler who is transporting contraband alien artifacts of some description.

On the way to my ship, I run into my injured debtor from the intro sequence who is looking physically better but acting more than a little paranoid. He rants about a government conspiracy behind the Freeport destruction how neither of us are safe. It all sounds unlikely until a couple of goons show up, shoot him in the back and stun me with a futuristic cattle prod.

During all this the mysterious smoking man watches on and this time he is packing a purple egg which is no doubt significant in some way. Once again leaving more questions than answers, he throws away another barely touched cigarette and walks off.

When I wake up, my friend has vanished along with the 1,000,000 credits he owes me. On the bright side, it would have been a short game if he paid up and I now get to carry on with the original mission tracking down this smuggler. I have to fly to another system through a different type of warp gate, then fight a stack more ships. These missions are definitely getting trickier but I’ve not had any great difficulty in finishing each first time so far and I’m still in the original ship. I’m working on the principle that the longer I can hold off on upgrading the less money I’ll waste so I’ll upgrade when I start losing missions.

I’m getting a better feel for the combat now. Unlike Wing Commander, there are no shield zones in this game so it makes no difference where I hit an opponent. If enemy shields recharge, I can’t say I’ve noticed it so there is no pressing need to take enemies down quickly either. I have noticed that different guns damage shields and armour at wildly varying rates and I’ve settled for a combination of types to try to balance this out.

My own shields recharge quite quickly and it appears to be easy to not get hit provided I’m not trying to score hits of my own. I.e. fly around randomly for a bit if you get damaged. I’ve rarely had to do this so far though and as an extra backup there are also shield batteries which instantly recharge your shield to full but have to be bought from dealers. I’ve not even looked at missiles yet so I’ll deal with them if I feel the need to start using them.

I’m told to disable the smugglers ship. I don’t have ion cannons, leech missiles or the like so this is just a case of shooting him until he doesn’t quite blow up. At this point, he ejects and I get to tractor him in. We then have to fly all the way to a distant military base, fending off yet another attack on the way but I get him there safely and he presumably gets to be tortured into revealing all by the LSF.

I learned a little more about the alien artifacts from King on the journey back. Alien finds have always been dust and ruins in the past but rumour is that these are functional. What that function is, he doesn’t say but I’m guessing some of them look like purple eggs. 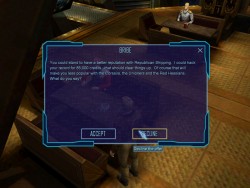 I’m left to fend for myself again after this. I fly a couple more random seek-and-destroy missions but don’t earn enough to advance to the next level.

I’m a little underwhelmed now I’m getting into Freelancer. It’s certainly got more plot to it than Starlancer and is by no means a bad game but I’d rather be playing pretty much any Wing Commander. It’s striking a nice balance between story and freelancing with the way mission availability is based around earnings. My main complaint is that the mouse control just isn’t growing on me and the combat is less engaging because of it. Also the non-story missions have been uninspired so far. I think I’m still being slowly introduced to the game however and there’s still plenty of time for everything to pick up. It never helps that I have to stop and write all this stuff up as I’m basically halving my speed of progress. I’ll aim for more playing and less blogging with the next session. 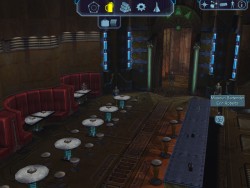 One random thing I noticed was a bar tender called Erin Roberts on one of the space stations.If Chris makes a cameo, I’ve not seen him yet.

I can’t end without saying well done to Star Citizen and all its backers for already passing the 2 million mark. I don’t know where it will end up but the Project Eternity record is looking well within sight at this point and hopefully a good deal more after that.