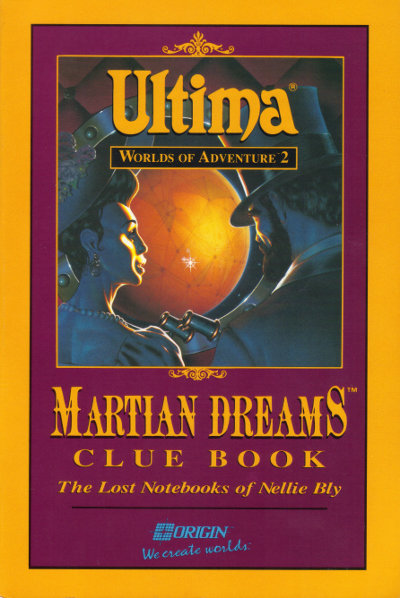 Now that I’ve started, I’ll carry on going through all these Ultima cluebooks and the next in the list is Martian Dreams. This has to be one of the rarest out of all of Origin’s books since the game itself isn’t all that common. This logic doesn’t always follow though. The obvious example here is Leisure Suit Larry which had a very slow start in sales terms but loads of pirate copies ended up being passed around. I gather this was so prevalent that after a year, sales of the hint books outstripped sales of the game. I seriously doubt that happened with Martian Dreams, which is a game that has to this day never seen a budget re-release or been available on any compilation. It seems to be largely forgotten and this is a crying shame for one of my favourite Ultima games. Maybe if EA ever sign up with GOG.com we might see it get the audience it deserves but it’s not looking likely at the moment.

Back to the cluebook anyway. This was published in 1991 by Origin and takes the very familiar format of being a guidebook written by one of the characters in the game, in this case Nellie Bly with additional notes by Spector. The cheap monochrome covers of the last two cluebooks are gone and this one is in full glossy colour which is a huge improvement. Along with all the other Martian Dreams documentation, I scanned this in 5 years back and it’s available for download at http://www.replacementdocs.com.

It’s a much drier read than the Savage Empire guide with two much more serious characters “writing” it and contains little in the way of humour. You have to turn the book sideways to read the early pages which I’m not especially keen on but it’s a standard format for all but the map/guide section. It does contain a large quantity of artwork and plenty of background details including a history of the Martians. There is also a full bestiary with pictures and finally a walkthrough told in journal format by Dr. Spector.