For some years, one of my favourite series of games has been the Tex Murphy adventure games. The series notched up five titles during the 80’s and 90’s before ending on a cliffhanger that would only be resolved in 2014 when a Kickstarter funded sequel called Tesla Effect finally arrived.

It’s a series that is famous for it’s copious use of FMV and coming on lots of CD’s as a result but the first two entries predated the CD revolution and were more modest affairs. I’ve wanted to play through the series again since playing Tesla Effect a couple of years back and thought I’d start now with the 1989 game Mean Streets. 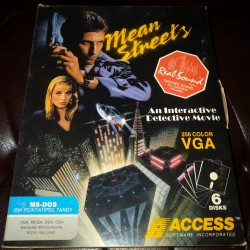 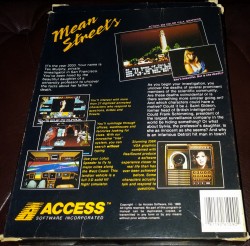 In 1989 it was quite a big deal for a game to be in VGA and the box makes sure you don’t fail to notice this. It backs this up with loads of photos to emphasize the 1989 standard multimedia nature of the game. Access tried something similar with the box for their Narc rip-off Crime Wave which is famously cheesy, I hope deliberately. 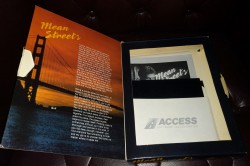 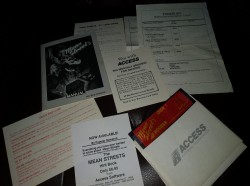 The box opens up to reveal the story of the game on the left and a whole heap of paperwork, including printed sheets to keep notes on as you play the game. The game came on a sizable 6 floppies and I remember playing this directly from those floppies back in the days before I had a hard disk. Plenty of disk swapping was involved as you might expect. 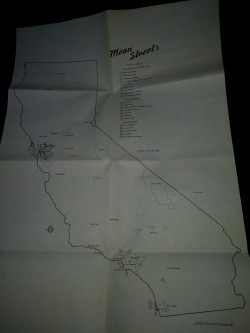 There is a paper map included. I’m always a fan of this sort of thing in my PC game boxes but it’s not the most interesting it has to be said and won’t be needed at all when playing the game. 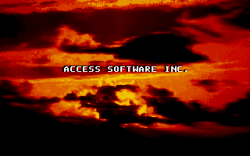 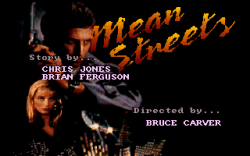 On starting the game, there is a brief credits sequence with digitized VGA graphics looking far better than much else I’d played in 1989. Coupled up with this was Access’ patented Realsound software which managed to coax low fidelity digitised samples from a PC speaker before we all had sound cards. This sounded way better than it had any right to and there were even instructions in the manual on how to hotwire a proper speaker system to your PC in place of the beeper. Soundcards would kill this technology off but Access used it in plenty of games around the time.

In the intro sequence, the Realsound means we get actual music. OK, it’s made up of 3 sections lasting about 4 seconds each that get looped but it was a lot better than the usual beeps. This is just as well as it will be the only music used throughout the entire game. I gather the music was stolen from a TV commercial but have no idea what the commercial was. 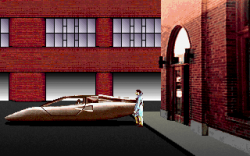 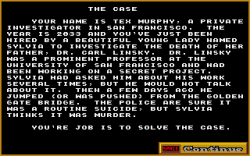 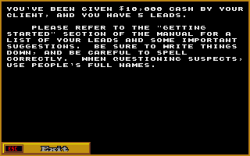 On starting the game, Tex walks to his speeder and the aim of the game is spelled out. Tex is a PI working out of post world war 3 San Francisco in the not too distant future. Nuclear fallout has mutated much of the population and these mutants tend to form the lower rungs of society. Tex is lucky enough to be immune but still lives among the mutants due to his career choice.

Tex has been hired by Sylvia Linsky to find out what happened to her father who apparently committed suicide by jumping off the golden gate bridge. She doesn’t believe he would ever have done this and it’s up to Tex to find out the truth. 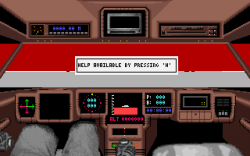 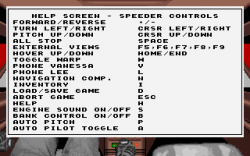 In what may well be a unique combination, Mean Streets is a hybrid flight sim and adventure game. I can’t offer any explanation for this concept other than Access already having developed other games in both genres and someone must have thought it would be fun to join them together. I should be surprised we didn’t get Links 386 thrown in somewhere as well. A golf sim was promised in Tesla Effect but never happened. 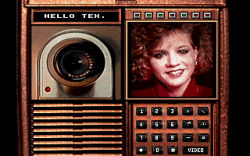 Before I get to any flying around, I’m able to call 2 people from the speeder using a video phone. One is Tex’s secretary Vanessa and the other a shady informant known as Lee. I’m able to type in topics to ask either of them about with the only difference being that Lee will charge me for her services. Both have limited speech which impressed the hell out of me when I first played this. 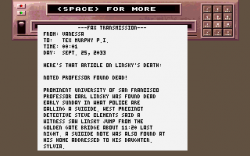 Whatever topic I pick, the information is faxed to me a minute later. Yes, in the future they not only still use faxes but you will have one in your car! 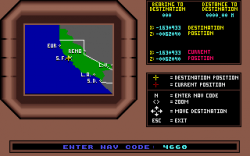 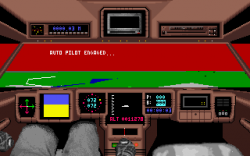 The main information you need from people in this game is nav codes. You key these in to the speeders nav computer and it tells you where to fly to either manually or on auto pilot. I’ll be sticking to autopilot throughout. Having been supplied with a pile of these codes by Vanessa I head off to follow my first lead. 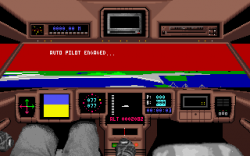 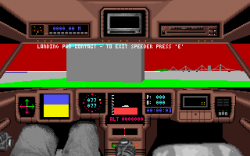 The flight sim in this game is rudimentary at best. The speeder can hover, take off vertically and is indestructible as far as I can tell. This part of the game mainly serves to slow the player down but it was sort of impressive at the time. You can speed things up marginally by spamming the warp drive key when the auto pilot shuts it off too early but expect to spend half your time waiting to get places when playing Mean Streets. 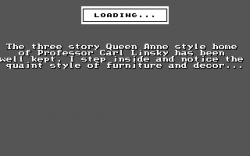 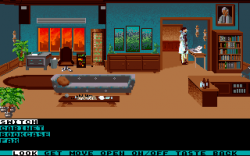 The first location is Carl Linsky’s apartment. I have to carefully search this by walkin NJg around the room to various hotspots and navigate the text menu tree options to look at, move, open and switch every object I can find. The best bet here is methodically working through all available options.

The hotspots are huge covering whole swathes of the room so the walking around part isn’t as critical as a Sierra game. This is just as well given the way Tex shuffles slowly around the screen.

Each location needs to be scrupulously searched so it does feel quite like the detective game it purports to be in these sections and it’s the most successful part of Mean Streets. There are extra little puzzles to find objects that can be pawned to raise cash for paying bribes. Any objects found are used automatically whenever needed. These sort of inventory puzzles tend to only be used for the optional puzzles. 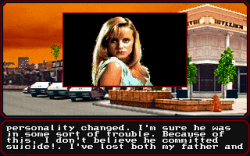 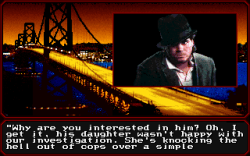 The next locations emphasise the other main gameplay element which is interrogating people. This consists of typing in people or subjects just like in Ultima 4. Sometimes people may need to be bribed before they will talk using a primitive bartering system. All the people are shown in cheesy digitised photos. There is a strong sense of humour in these depictions and the designers clearly didn’t take things too seriously. 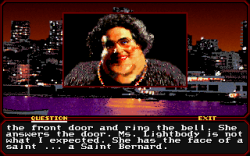 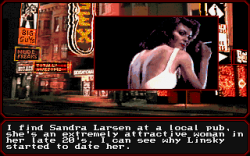 I talk to my client Sylvia, Steve Clements who was investigating the case, Carl Linsky’s fiancée and his bit on the side Sandra Larsen. I learn that Carl had an insurance policy which won’t pay out to Sylvia in the case of suicide. This would explain why she hired me and this could be a short case. 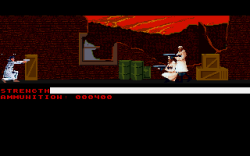 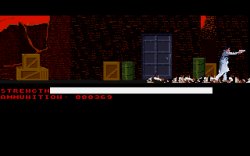 On the other hand, when I try to get to Linsky’s warehouse there is an endless supply of goons trying to gun me down so I may be on to something.

These arcade sections sometimes appear before the adventure or interrogation sections. The bullets move quite slowly and I have to duck to avoid being hit and pop up to shoot back over cover. When I get the chance I have to get to the right of the screen when there is room between shots. It’s all about timing and shouldn’t delay progress much once you’ve played these sections a couple of times. 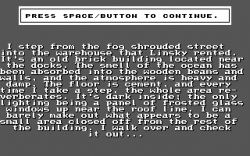 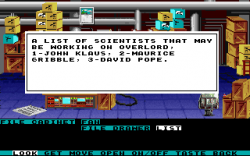 Carl’s warehouse leads me to clues about his employer Gideon enterprises, some of his old colleagues and a mysterious project called overlord which is linked to MTC corporation. 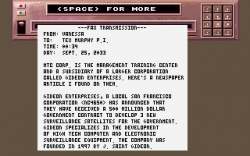 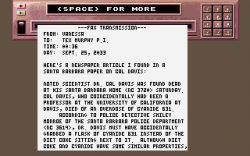 Vanessa gives me some more nav codes when I ask about these clues and I’ll see where they lead me to in part 2.