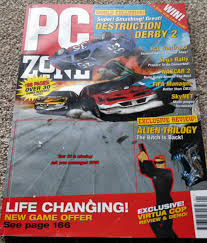 This weeks PC Zone scan is issue 46. It’s lengthy enough clocking in at nearly 200 pages but doesn’t actually cover any games that interest me particularly. Presumably all the really big hitters made it out before Xmas. It’s another off the list anyway and can be downloaded here along with all the others that have been scanned so far.

The one scan a week schedule appears to be working out so far. I’m reasonably confident I’ll keep this up until I run out of issues which will be late in the year. I’m missing issue 48 so the usual call goes out if anyone has that one.