I’m going to attempt to write up a book a day while I wait for stuff to arrive in the post. I don’t have a lot of time today so it’s another quick one, Quest for Clues. 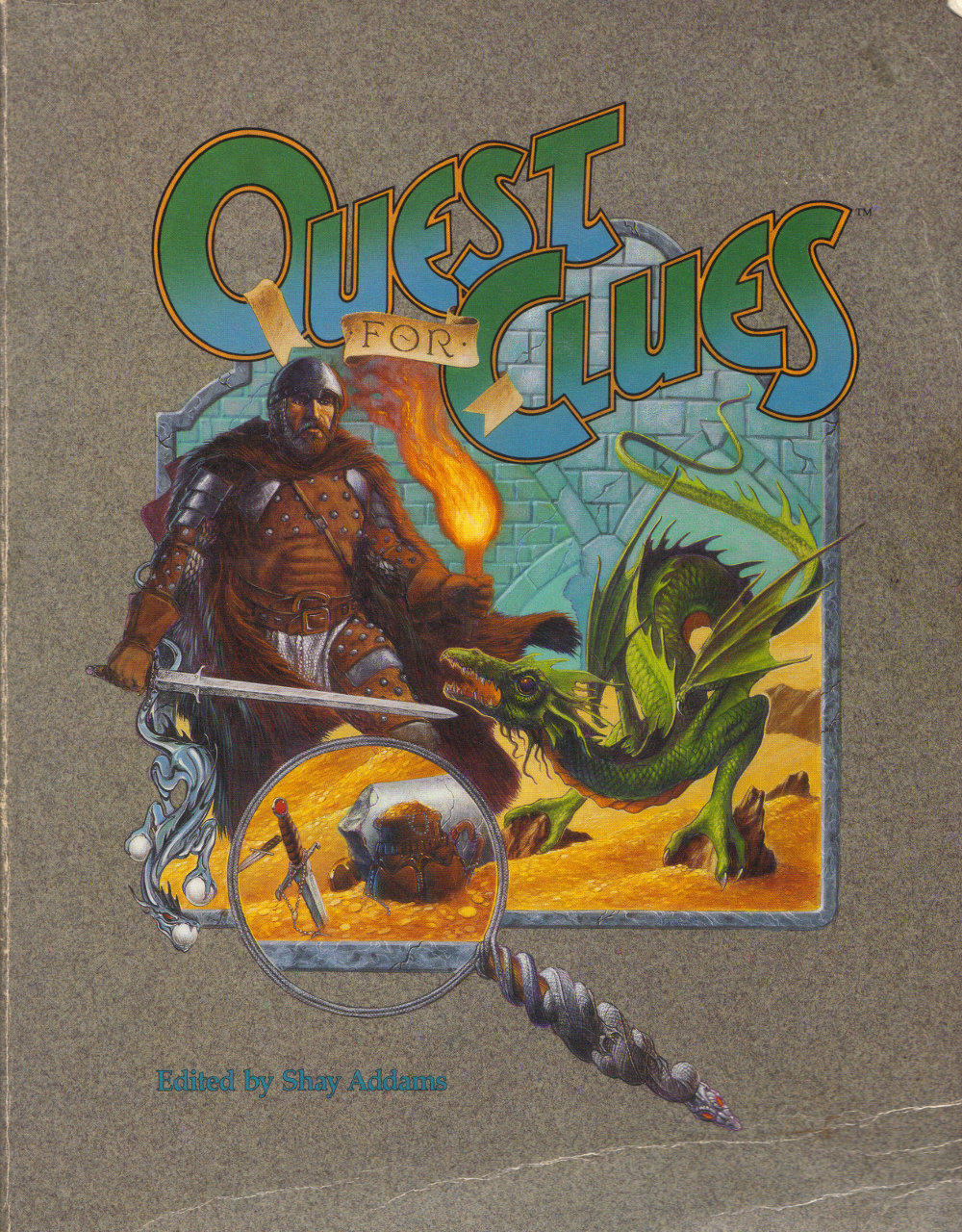 This was published in 1988 by Origin and was edited by Shay Addams who would go on to write the official book of Ultima. It’s an over-sized cardback and contains a considerable number of pages so there is a lot for your money here. In fact the blurb on the back goes on to say that the solutions contained in the book would be worth $175 if bought individually rather than the $25 this cost to buy at the time. The idea of buying an individual game solution seems strange now but with no internet, plenty of people used this sort of service back in the 80’s. I remember using an 0898 automatic phone service when I was playing Alone in The Dark 2 which must have ended up costing me half the price of the game by the time I finished it. 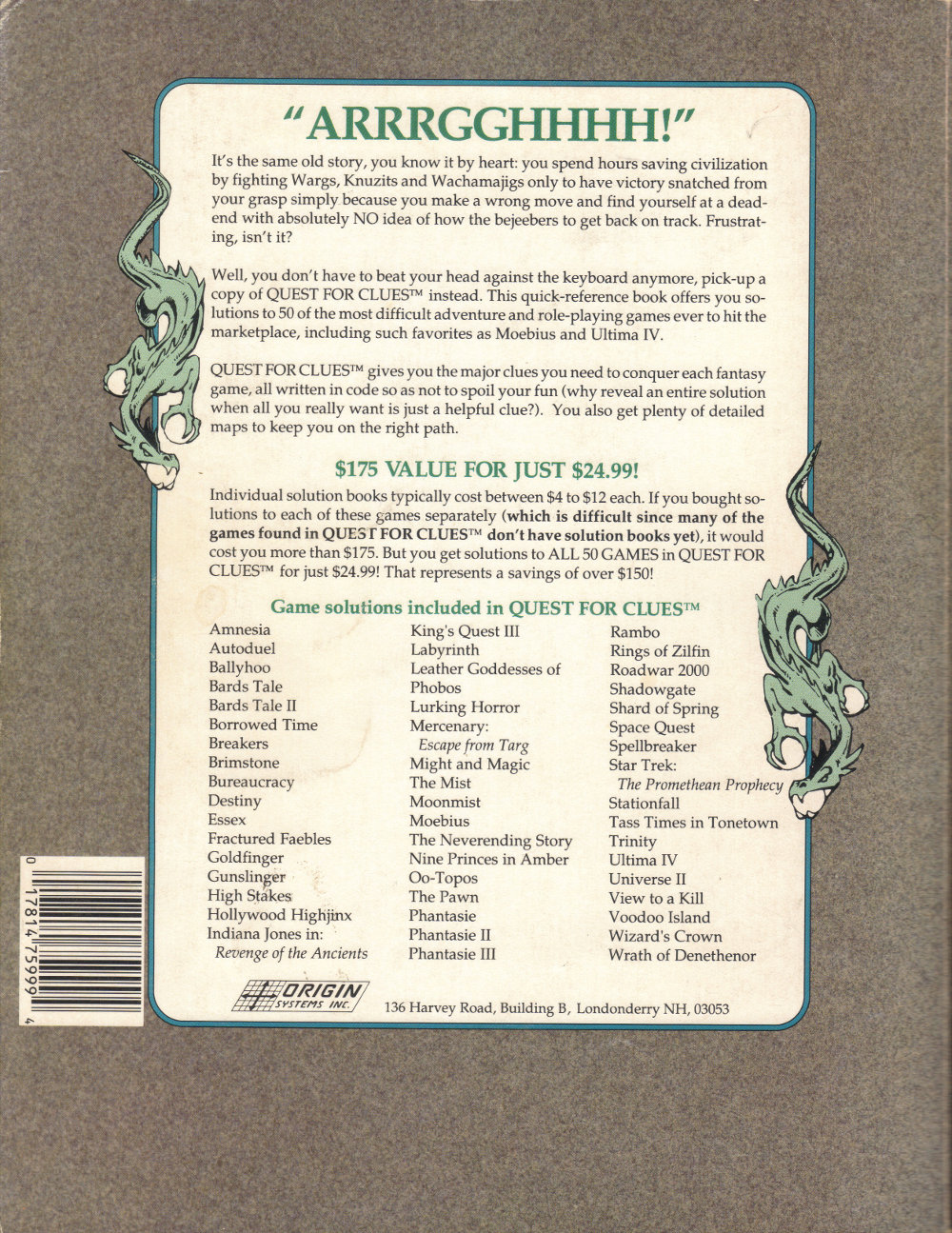 The book is a collection of solutions for a wide variety of RPG and adventure games from the era, all of which have been written and contributed by members of the Questbusters Guild. This “guild” was a group of gamers who would write in with a walkthrough for a game which the guild could then publish. In return they received a copy of any game of their choice. Given how expensive games used to be, this strikes me as a pretty good deal.

The introduction to the book is the most interesting part and I attach scans of it in full below (with clickable thumbnails of a sort). I’ll be scanning in selected sections of these books on my way through if they aren’t available on replacementdocs. I won’t make any great effort to tidy the scans up but they will be more than adequate to read the content.

This introduction tells the story of the birth of adventure games, including interviews with developers of several of the industries founding games. There is nothing ground-breaking here, but I always enjoy reading about this sort of thing anyway. After this it’s straight into the solutions. These are straight forward walkthroughs, usually with a basic map at the end. The only slightly unusual feature is that some words are shown in code and you have to decrypt them with a key printed at the back of the book. The code is so simple that you can usually see straight through it, but I suppose the idea is to stop you from inadvertently reading a solution to something. With the rest of the sentence in plain English , I’m not convinced that this would be very effective but it’s better than nothing.

As a sample, I’ve included the solution for Autoduel below. Each game usually has a black and white picture on the title page, with a little bit of an introducion and an opinion on the game. Some familiar art from Ultima manuals also makes it’s way into the book.

There are 50 solutions contained in the book making it a very useful resource for anyone who likes to play old RPG’s and adventure games. Finding decent solutions for some of these games on the internet these days would be tricky as they are too old/obscure to have FAQ’s on the usual sites. I’ve certainly found it extremely useful at times with games like Moebius.

I’m not sure how Origin ended up publishing this as it isn’t obviously linked to to them. It does contain solutions to several of their games but no more so than Sierra or any other publisher. They went on to publish 5 more titles in this series (with a slight name change after the first 4), all following the same format. I’ve found all of them extremely useful over the years. If I’m struggling in an old RPG/adventure game, you can more or less guarantee that the answer is in one of them, but unless you play a lot of old games there isn’t any reason to go out and buy this. The solutions are simplistic and while enough to get you through the game, they don’t tell you how to score maximum points, or mention hidden areas and alternative paths. This is probably a book for Origin collectors or avid oldskool gamers only.

I’ll move onto something considerably more substantial tomorrow with the Wing Commander 1 & 2 Strategy Guide, including a full scan of the Chris Roberts interview.

3 thoughts on “Quest For Clues”