It’s a pleasant Sunday morning here in the UK but I’m stuck in the house waiting for a guy to deliver a van full of 90’s PC gaming magazines. This gives me chance to write another post and I was fortunate enough to see Richard Garriott : Man On A Mission earlier in the week which I thought deserved a brief review.

The film was directed by Mike Woolf and has been around since 2010 but only seen wider releases relatively recently. It’s easily available in the US on numerous download services but getting to watch it over here in the UK is a lot more tricky.

The movie deals with Garriott, his family’s history and how he has dedicated a large part of his life to achieving his aim to get into space via private space travel since being denied the chance to become an astronaut at an early age due to less than perfect sight. Aside from the $20 million he paid for his ticket, he has been investing in space right from the beginning of his career in gaming in order to achieve this.

From the perspective of the blog, I have to give particular notice to the start of the documentary which tells Garriott’s all too familiar beginnings in the gaming industry but he also shows off his copy of Akalabeth and runs it on his original Apple II. The collector in me can’t help geeking out over artifacts like this. There was little to no mention of Origin however and the majority of the film is taken up with his training and the trip itself.

It may not offer the history of Origin but if you ever wanted to know what is involved in getting into space you could do a lot worse than watching this. The training process is covered in some detail with the largest part surprisingly being 4-5 hours a day of Russian language training. The history of space travel is also covered including some Garriott family history with his father being an astronaut himself.

The trip into space itself is a smaller part of the film than I would have expected but it did rely solely on Garriott’s “home movie” footage shot while he was up there. I didn’t get as much of an idea of what he spent his time doing as I might have liked during his week on the space station but it did give some insight into the working life of an astronaut.

Some time back I saw the IMAX 3D film Space Station 3D. For anyone who has seen that, huge swathes of this story will be extremely familiar since it is describing all the same things. Man On A Mission is a much more personal journey though and Garriott’s childlike enthusiasm shines throughout. I already knew nearly all of the information contained in this film but it certainly shows the personality of the man himself far better than anything else I’ve seen or read previously. For anyone interested in the history of Origin, this alone makes it more than worthwhile to track down.

As for the film on its own merits, it is a lot better than I had hoped. I’ve seen it described as the worlds most expensive home movie or a vanity project. Neither of these are fair criticism. This is a valid professional documentary on an interesting subject and Garriott hardly comes across as an ego-maniac, quite the opposite in fact. It’s an intimate story of one mans obsession and what he was prepared to do to achieve it. It’s inspirational not so much because he managed to achieve it but because he carried that dream over 30 years without any dampening of enthusiasm. I can’t say it’s necessarily worth seeing on the large screen (although you could do a lot worse) but it’s worth tracking down a copy when it surfaces on DVD for anyone who wants to know more about either the man himself or space travel.

A $20 million trip to space is a little out of my reach but my £20 worth of old magazines turned up before I finished writing this. They are in a big heap by the front door at the moment while I figure out what I’m going to do with them all. I reckon if I was to read this lot cover to cover and play all the demos I’d need to dedicate about 30 years to it myself:- 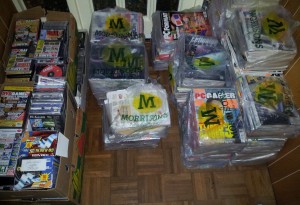 1 thought on “Richard Garriott : Man On A Mission”