This will be a short one as I found all of one review for The Horde in the July 1994 PC Format. They liked it a whole lot less than I did citing the repetitive gameplay and lack of enough to do. 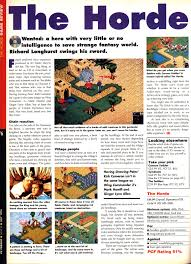 I don’t have the issue but it was also reviewed in the July 1994 PC Zone. They used to include scores from the old issues at the end of their magazine which are usually my first port of call to figure out which months I need to look at to find a given game. In contrast, they gave it 87% saying “Not an original concept but extremely well implemented.”