It’s hard to believe it’s been two months since the last post but time has been scarce and it’s been hard to do much in the way of retro-gaming while my house has been getting fixed up after the Xmas floods. 6 months later, repairs are still ongoing but I expect to be back in residence within a couple of weeks. It’s been a long time coming but the place will at least be considerably improved at the end of this. On the downside, I’ll have to redecorate the next floor up to get it up the same standards but that can wait for a while.

So to get back vaguely on topic, I haven’t entirely stopped collecting and something I’ve fancied getting hold of for ages is a Sinclair PC200. For the majority who no doubt haven’t heard of this, it was an 8088 PC released at the end of the 80’s by Sinclair (after purchase by Amstrad). It was a CGA PC in the form factor of an Amiga/ST with the keyboard and PC built into one unit and a TV out on the back so you didn’t need a monitor. I was one of the very few who owned this at the time, mainly because of brand loyalty having owned the Spectrum before. The Amiga or ST would have been a far better choice for any gamer as the PC200 was a pretty terrible machine for its day. As a result, hardly any were sold and it was the last computer to carry the Sinclair brand. These factors have combined to make it something of a collector’s item these days. After my latest attempt to get one at a reasonable price failed by some margin (it ended up selling for £200+), it occurred to me that if I were to get an old PC, it would be far more fun to have a Tandy 1000 with its enhanced sound and graphics, not to mention a whole lot cheaper. So after some shopping around I got this:- 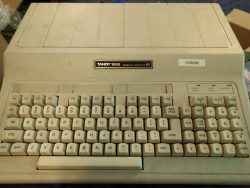 It’s a Tandy 1000 EX, first sold in December 1986. It was a more affordable all in one version of the original Tandy 1000 which in turn was a clone of IBM’s ill-fated PC-Jr. This particular version has a miniscule 256K of RAM, CGA/Tandy graphics support, an 8088 7.12Mhz processor, a 5.25 360K drive built into the side and a whole lot of dirt on all the exterior surfaces. 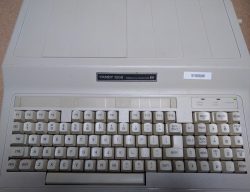 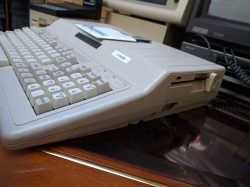 I never let a bit of grime put me off buying anything if it is solid enough underneath and this certainly needed some cleaning. It brushed up well after a little effort and as luck would have it was already in great shape internally.

The PC-Jr/Tandy 1000 had a couple of things going for it over a regular IBM PC. The first of these was a sound chip capable of 3 channel music + a separate noise channel. This wasn’t the most sophisticated of sound devices when compared to the SID on the C64 but it was a massive improvement on PC beeper. All of Sierra’s games were famous for supporting this throughout the 80’s and it was the best available for a DOS gamer prior to sounds cards coming into play with Kings Quest 4 in 1988. 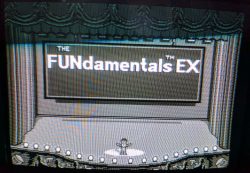 The other thing it had going for it was support for Tandy’s proprietary 16 colour graphics mode. This was actually a clone of the 16 colour graphics mode introduced by the IBM PC-Jr but with that being such a dismal failure commercially, Tandy dropped all mention of it from the start. The Tandy does include a composite out which should let me see these graphics on a TV but I imported this from the US. This means the output is in the American NTSC format which leads to black and white for me trying to run it on a UK PAL TV. I’m sure Tandy 1000’s were around in the UK but only in small numbers so importing was definitely the cheaper option, especially when I already have a voltage converter for the IIGS. 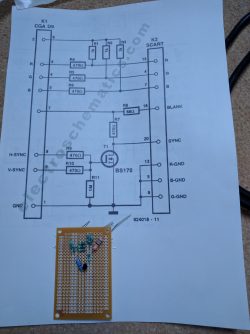 So I had to come up with a solution to get colour graphics. CGA PC’s used a 9 pin monitor connector (identical to many joysticks of the time) which sends a simple digital RGB signal to build the picture. The colours are built using 3 on/off RGB lines to create the first 8 colours and a fourth pin controls the intensity of these colours giving lighter/darker shades to make the full 16 colours.

One of the advantages of being in the UK is the SCART connection we have on all our old TV’s comes with RGB support built-in so it is in theory possible to build a little circuit  board to convert one to the other. My early attempts at this are pictured above.

I got some way with this but my limited soldering skill and lack of proper equipment was making the job go extremely slowly. This solution would also have got one of the colours wrong since the CGA monitors of the time converted light yellow to brown in their hardware which wouldn’t have been supported. The parts cost a couple of pounds so it’s no great loss and I’m sure I could have succeeded eventually but when the opportunity arose to get an actual CGA monitor instead, I decided to treat myself. 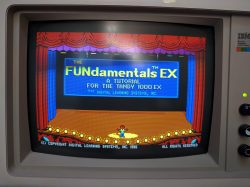 Coming at a considerably higher price than the computer itself, this is an IBM 5153 CGA monitor which is a little beat up on the outside but the picture is still as crisp as ever and gives my modern LED screen a run for it’s money. 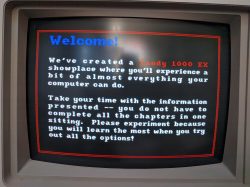 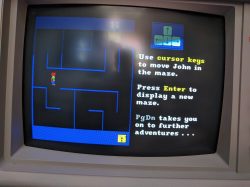 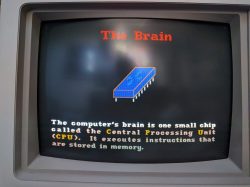 The computer came with a single floppy disk with “The Tandy FUN-damentals”. This is a simple introduction to the PC with some 3 channel music and a load of instructions on how to use DOS and what the various bits of the computers do. This sort of thing harks back to the days when learning how to use a computer was educational in its own right. Just like back then, I’m only really wanting to play some games on this thing which is where the next problem comes in. I have plenty of old games on 5.25 disks but precious few of them are bootable which means I need MS-DOS on a 5.25″ floppy disk. 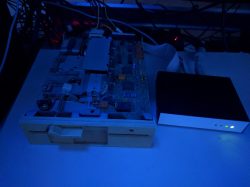 I debated for a while about how to do this. My first thought was that I could use my Kryoflux but it doesn’t actually support writing PC disk images for some unfathomable reason so I came up with a plan B. My Windows 98/DOS gaming machine has a floppy emulator connected to it (shown on the right above) which I got some time back from http://lotharek.pl/ . This connects to my modern PC with a USB cable and to my old PC via a regular floppy disk drive cable that I’ve routed out of the back of the machine. The upshot of all this is that I can load up a disk image into some software on my new PC which will then be readable as though it’s a real floppy on the DOS PC.

I found images of the original Tandy boot disks at http://www.oldskool.org/guides/tvdog/system.html, loaded them up into the floppy emulator and copied them to a real disk through DOS. I had to connect up an old 360K 5.25 drive on the top of the PC since the floppy cable was already routed out of the back. Finding standard density 5.25 inch disks was tricky but I had some hidden in amongst some of my old Sierra games. 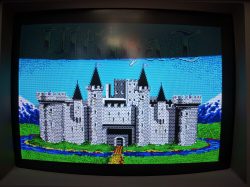 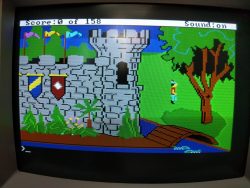 This worked a treat and allowed me to boot up DOS and subsequently Ultima 1, and the original PC-Jr game Kings Quest 1 both of which do run amazingly slowly on a machine this old but look great in 16 colour mode. I’m seriously looking forward to playing a few games on this thing now it’s finally up and running.

Plenty of Origin games supported Tandy graphics but sound support was limited to a handful of games around the late 80s. The one that may benefit the most could be Tangled Tales since it has no sound card support. The snag is that just about all these games require more memory than 256k so I can’t actually run them.

The 1000 EX used a proprietary memory expansion which slotted into its unique expansion port at the back of the machine. Now I start to look for one, these aren’t exactly all that common or cheap. In fact, I expect it will ultimately be cheaper to buy a later model of Tandy with more memory built-in.

The moral of all this if there is one is to do a bit more research before you buy and don’t get into old computers unless you can throw a bit of time and money at them. I’m definitely going to have a bit of fun with this machine at any rate, even if it doesn’t run quite everything that I’d like it to. The first port of call has to be King’s Quest so expect a playthrough to follow shortly. Before that I really should have a look at the System Shock remake demo.