The Wing Commander CIC has been flying the flag for Wing Commander for 18 years as of this week so in honour of the occasion I thought I’d look at something to do with Wing Commander. I’ve been looking for games to play on that Tandy I recently acquired and was slightly surprised to see that Wing Commander supported Tandy 16 colour graphics so I thought I’d give it a go. This was never going to work on my EX but I did have a chance of running it on Tandy #2, the Tandy TX. 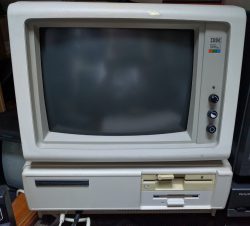 I picked this up some weeks back when I figured I would never find a memory expansion for the EX only to then find one days later at a decent price. You can never have too many old PC’s as far as I’m concerned so it’s now been added to the ever expanding collection.

The TX has several things going for it over the EX. For a start it comes with 640K of RAM as standard. It has a 3.5 inch 720K drive by default, built-in DMA, and normal 8 bit ISA slots opening up a world of expansion options. It’s quicker than the EX with a 16 bit 286 processor running at 8 Mhz although it’s not quite a full 286 as all the peripheral interfaces (including graphics) are still 8 bit. Perhaps the only disadvantage over the EX is that it can’t be made to run at 4.77Mhz to support the oldest of DOS games but it does have a half speed mode.

I bought the TX, untested and as is. Getting it to a state where I can actually use it has been a bit of a project. First problem, it didn’t come with a keyboard and this being a Tandy it has a proprietary keyboard using an unusual DIN plug. The same goes for the joysticks. It has native support for two which is a nice feature in a PC of the era but they also use a Tandy only DIN socket. To compound this, you can’t disable the ports meaning that it’s not possible to slot in a joystick card to one of the expansion slots.

Despite a worrying amount of rust on the case, I did manage to establish that the machine would switch on and run a program using a boot disk and an autoexec.bat. I added a 360K drive while I was at it. The machine came with a hard disk expansion card which would have been a nice bonus had it actually worked so that needed sorting out as well. It came with a VGA card installed but that’s far too modern for my purposes so it got removed in favour of the built-in Tandy graphics.

First things first then, the keyboard was simply a matter of tracking one down, not all that easy but they are out there. It was a little temperamental when I first got it but seems to have settled down after a liberal spraying of switch cleaner. 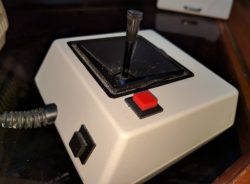 The joystick was along the same lines. It’s not exactly the flightstick I would choose for Wing Commander but then I’m not expecting it to be playable anyway. This joystick was certainly cheap but when it arrived the rattling sound and the fact it flopped up and down was not a good sign. 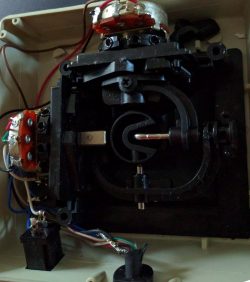 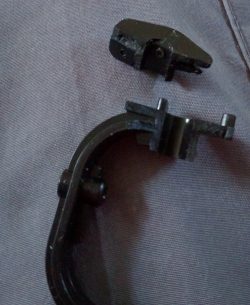 Sure enough, on opening it up the bracket connecting the vertical axis to the potentiometer had sheared In two on one side. Nothing some araldite wouldn’t fix at least.

I was less sure about what to do with the hard drive expansion card. It’s a curious one piece card with an ancient Western Digital hard disk attached directly to the 8 bit ISA card. I thought at first, I could maybe swap out the hard disk but the edge connector it uses put me off this. I discovered a much better alternative in the Lo-tech 8 bit IDE adaptor card. This is a modern card allowing you to add IDE devices to any 8 bit PC. The snag is they only sell the circuit board and you have to build it yourself. I took the far easier but pricier option of buying a pre-built one from Ebay. The device is made with CompactFlash cards in mind but also requires an IDE->CompactFlash adaptor if you are going this route. 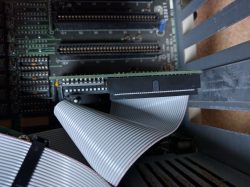 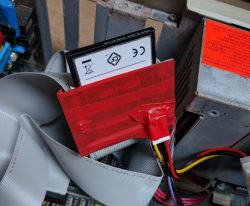 With the ISA card in place and connected up, I decided to carefully mask up the CompactFlash>IDE board to insulate it and shove this through one of the expansion slots at the back.. Once taped in place, this lets me remove the card when the case in closed.

Getting Wing Commander onto this PC would have been quite time consuming since it doesn’t support HD disk drives which is what the game shipped on. This solution allows me to just slot the CF card onto a modern PC and copy any software I like to it which is going to make using this PC a whole lot easier. 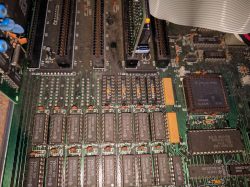 At this point, I could nearly run Wing Commander, except for a lack of memory. The original PC-Jr shared graphics and system memory meaning that the Tandy graphics mode eats into the 640K and the game didn’t have enough RAM left to run. One more trick the TX has going for it over the EX here is 4 expansion sockets to drop in some extra DRAM chips. These add another 128K which is exclusively used by the graphics and frees up the whole 640K. These are regular DRAM chips which I thought would be dirt cheap but the price over here was a ludicrous £7.99 each and I needed 4. I took the far cheaper option of importing a set of 5 from Hong Kong for not much over £2 including the shipping.

I noticed while I had the case in bits that it’s been arranged with the speaker at the front of the case where you would expect except that it points into the case, presumably to shield the components from the magnet. It’s not the most obvious arrangement but doesn’t affect the sound as much as you might expect and it’s still quite loud with the volume switched up to full.

Some time later, the chips arrived from Asia and I was finally able to give Wing Commander a go this week. So after all this effort, how well did it play? My hopes were never exactly high. The recommended specs are 12Mhz or higher. I know all too well how Origin games run on the “recommended” specs by now having experienced it back in the 90’s. My Tandy is only 8Mhz and not really a true 286 putting it considerably below recommended. The results could be described as just about playable but in truth this is Wing Commander – the turn based strategy.

I do quite like some of the PC speaker sound effects actually which I’ve never heard before. I’m not so sure they aren’t better than their Roland equivalents. The graphics hold up far better than I would have expected in 16 colours too. The installation program just converts the 256 colour graphics as part of the install so they haven’t been created with the Tandy in mind. This does result in some odd character graphics such as Spirit looking decidedly red during the initial briefing. Some of the in mission text is completely illegible suggesting that Tandy mode didn’t get all that much testing at Origin. A lot of the screens still look great such as the launching sequence. On the whole I reckon if it was about twice as fast, I’d have been pretty happy playing this back in 1990.

VGA is still clearly the way to go but Wing Commander running on a CGA monitor isn’t exactly a common sight so for the very few who might be interested, I pointed my phone at the screen and had a go at the first mission. I met an ignoble end, afterburning into an asteroid but it gives an idea. Apologies as ever for picture quality – next time I do one of these I’ll figure out how to turn off autofocus on my phone.

It may not have been the best way to play Wing Commander but the upshot of all this is that I now have another fully specced and working Tandy which I will definitely be playing a good number of games on over the coming months.