I was asked some months back if I’d take a look at the ports of the first 3 Ultima games for PalmOS. There appears to be precious little information about them on the web so this isn’t going to be a lengthy post. I’m always curious to try out new versions of Ultima so I can take a look at the game at least. With this in mind, I bought myself a Tungsten T3:- 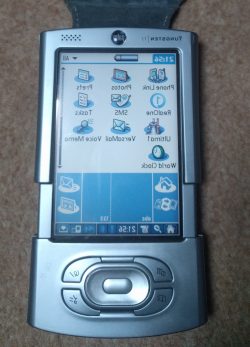 This particular PalmOS device was released for around $400 in 2003, a few years before the first smartphones. In essence it does the same job, just with a lot more limitations and of course you can’t make a phone call. It has a 320×480 touchscreen, a 400Mhz processor and 64MB of RAM. These devices aren’t exactly in demand and are pretty much being given away these days.

The Ultima ports in question were done around 2004 by Paul Chandler of SoftwareByPaul. The remnants of his GeoCities site are still available at http://www.geocities.ws/softwarebypaul/ but the purchase link points to the long dead palmgear.com website. This means that for now at least, these games have been lost with only the demos available for download. I’d happily buy the full version if given opportunity but for now will content myself with a quick blast around the U1 demo to get an idea of what the full game would have had in store.

Some liberties have been taken and I assume this is the same engine used for the Ultima 3 port. There are certainly plenty of Ultima 3 elements incorporated with a party of 4 characters, field of view, magic shops no longer selling individual spells but instead offer healing/resurrection, etc… Combat takes place on a single screen allowing each party member to be controlled individually. The dungeons are all 2D and a lot less populated by monsters than I’m used to, with no trap doors, coffins or even secret doors as far as I can see.

Other elements of Ultima 1 are in place with the map appearing reasonably familiar. Lord British’s castle has been shuffled around a bit but the usual elements were all there with a locked up princess, 3 store rooms (I don’t appear to have a command to steal from them?). There is no sound to speak of. Without the ability to buy food, I’m not even going to attempt to get far enough into the game to see how stats work. Lord British does tell me I need to experience more, suggesting that the signposts may also have been gotten rid of in favour of something more akin to Ultima 3’s levelling up system.

I wasn’t sure about this port at first but it looks like it could be OK from what I’ve seen, even if it is different to what I’m used to. I expect the Ultima 3 port will make more sense rather than this hybrid. The T3 is actually not a bad little gaming device for this sort of thing with a nice clear screen for a gadget this old. Using the pen is quite noisy. I could imagine myself infuriating other train passengers were I to be tapping away on this on my commute. If I ever get hold of the full version, I may well try it and find out.

Rather than take all the usual photos, I’ve posted a brief run-around below in what appears to be the only video on the internet of this particular game. Note that there is a bug in character generation allowing you to start all characters out with 25 in every stat:-