It’s fair to say that I’ve played more than my fair share of Ultima 1 ports in this last year or two and I thought I’d just about run out of them when I was asked if I’d be interested in playing a boardgame adaptation. I can’t say I’ve ever played an RPG boardgame before but it’s certainly something different for this blog so I couldn’t really say no. My printer wasn’t up to the job but several weeks later we’ve managed to get the constituent parts across the pond and with a few additions of my own I’m in business and ready to give this thing a go:- 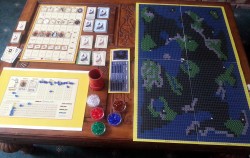 This is of course an entirely unofficial game and available for free with everything you need to play the game on Boardgame Geek for self printing and assembly. There is a whole lot of it so be prepared to do quite a lot of preparation if you want to try this out. The photo above just has the bare minimum to get started with plenty more cards placed to the side for as and when I get to them. There is also a 70 odd page rulebook which I’ve skimmed through but intend to get to grips with as I play the game rather than trying to take it all in at once. The plan here to blog my way through a game just like any other version, except you can expect more detail than normal to reflect the slower progress of this silicon free version.

To go through the main components, the sheet above is my character reference card which has a variant for each of the four character classes. All the stats can be tracked on here with counters which works quite well as long as I don’t bang the table. I’m going for a fighter here and put my stats into strength and agility like I would on the PC. All characters start with leather armour and a couple of daggers (there is no cloth armour in this version). All the stats here should be instantly familiar although I’m soon to find that things don’t work how I’m used to. 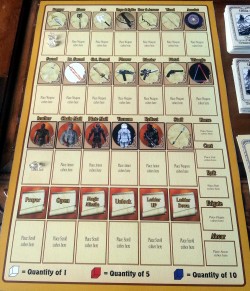 The inventory sheet keeps track of my inventory as you might expect. This hasn’t seen a whole lot of use yet but should come in handy when I start getting some items. 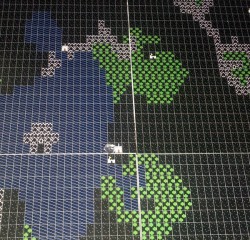 There are 16 map boards for the game with each realm split into 4. I’ve laid out the Lands of Lord British to start with as I don’t expect to be moving to another continent any time soon. I start next to Lord British’s castle and my first thought is to head for Britain to grab myself a bow. I’m free to move in all directions around the map as per the regular game, except I’m also able to move diagonally here which is something of a novelty for Ultima 1. On foot I eat 1 food for every 2 squares moved + a monster will spawn every 10 steps all of which I have to keep track of myself. I don’t have to worry about either of those stats quite yet as I step into Britain one move later. 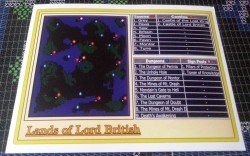 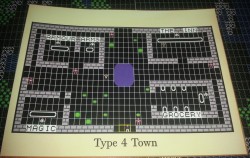 Each of the 4 realms has a guide to the locations available. There are 8 types of town, each with their own corresponding board and Britain is a type 4 apparently so I fetch that board out. I’m supposed to put tokens down for the guards at this point but I’m not planning on stealing anything so I give it a miss for now. The jester moves around randomly on the roll of an 8 side die and may steal from me if I let him get adjacent but he is easily avoided just like on the computer game. 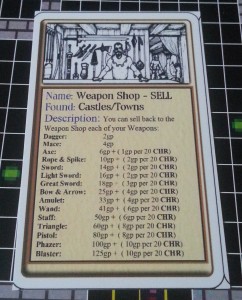 The weapon shops all have a set price list which can be improved if you have the appropriate stats (which I don’t). A bow is still only 54 gold if I remember right which seemed cheap at the time only for me to then realise that I’m not allowed to use it on this version until I’m level 3. So much for that plan. I think strength was what counted on the computer and I’m wondering if I should have put all my points into that particular stat at this point.

I decide instead to head for the nearest dungeon. I have to spawn a monster before I can get there. These are generated at a random distance from me (a six sided die + 4) in a straight line in a random direction. Once spawned they chase straight after me moving an extra step every 5. On foot there isn’t much hope in my running away so I turn and fight instead.

Combat here isn’t quite what I expected with stats not playing any part except for the level of my character. Basically I take the level of my character and look up the number in the sheet on the right above (20 in this case). I then take off the armour class of the monster (5) and any to hit modifiers I might have (these are an optional bonus for each level gained). I started with a +1 hit modifier so I have to roll 14 on a 20 side die to score a hit. The ranger on the other hand only has to roll a 9 so I’m at a serious disadvantage here. My dagger does a roll of a 10 sided die for damage with this ranger doing 2D6 +6 which makes things worse.

You can probably imagine how this went. I ended up losing about 3/4 of my hit points in this first battle and I decided that heading for the dungeon might not be such a good idea after all. My strategy changed to loitering around Britain until I find my feet. 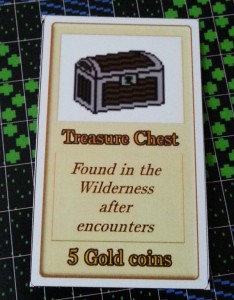 The monsters do all drop chests at least so I get to open the chest which means picking a card from the chest pile. I also got 64XP (twice it’s HP) but level 2 isn’t until 1000XP. Not feeling suitably rewarded I head back to Lord British’s castle to lick my wounds and spend all my money on HP (at a cost of 3HP for 2 gold).

After this point, the combat started to get a little easier and I was far better rewarded in terms of gold. I carried on spending my money on HP and got somewhere close to where I started after another 3 or 4 monsters were out of the way but I’m far from convinced that this is the best strategy as another encounter like the first would still wipe me out at this point. I decided to take a peek at the dungeon monster cards to see if I fancied my chances there any more only to realise that the cards were missing. A quick trip to the printer later and I decided the level 1-2 dungeon monsters did indeed look far, far easier + I’ll gain HP when I exit the dungeon so they have to be the way to go. I head for the dungeon once again and just about make it with 80 HP left. I really hope I can earn some more before I have to make the trip back again.

I reckon I can finish Ultima 1 in under an hour on the PC. I must have taken about 3 hours so far and I’m only 1/4 of the way to level 2 and I’ve not even got to the first dungeon. The main thing I’m taking away from this is the speed of the game which is incredibly slow when you have to do everything by hand. It’s undoubtedly going to speed up as soon as I can get the better equipment (and don’t have to refer to the rules constantly) but I can’t see that I’m ever going to choose this sort of boardgame over a computer game as a rule. Having said that, it gets me out from in front of a screen (often welcome since I became a full time programmer some years back) + it’s kind of relaxing to slow things down. I’ll stick with it and see how I feel at the end.

I certainly love the presentation and can only imagine the effort that must have gone into putting this together. I just hope it gets a little easier on my poor fighter in this first dungeon or I may start having to cheat.