I’ve had a good play around on the BBC in the last day or two running into loads of games I’ve not seen since I was in junior school. As fun and nostalgic as that was I prefer to tackle one game at a time and I couldn’t stay away from Ultima 4 for long. First I finished off raising my Avatar in every virtue and gathered some of the items I was missing while I was at it. 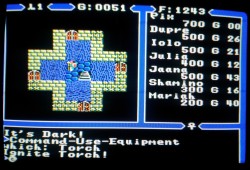 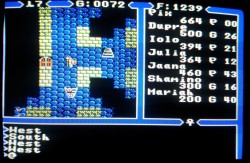 I then decided to attempt Hythloth so I could take advantage of the stones in there to raise my Avatars stats a little. This is where I finally reach the major departure from other versions of Ultima 4 in that all the dungeons are presented in overhead 2D using the same tiles as the rest of the game. Roughly speaking each tile of the 3D map is represented by a 2×2 block here although there is some interpretation. The SMS is clearly capable of 3D dungeons so I’m sure this was done for storage reasons. Dungeon and monster graphics would no doubt have eaten into cartridge space and if other aspects would need to have been cut it was definitely the right call.

The basic layout of every dungeon level is exactly the same as the original and it also contains each and every room within these so nothing is missing as such. It removes the maze aspect when you can see so much of the map in one go though. I do still have to contend with the same occlusion as on the overworld but some of these maps only make sense in 3D. For example one level is simply crisscrossing corridors with one ladder up and one down at different intersections. With the map wrapping at the edges fining the way out took a bit of effort in 3D. Here I can see where I need to go from the start and there is never going to be a problem avoiding monsters with all those intersections to hide in. This isn’t how you would design a level if you knew this was how it was going to be played and is perhaps a case of the port being too faithful.

This does make this section of the game easier in one sense but for most levels I’m surprised just how well the transition has worked. The 3D dungeons were always a peculiarity of the early Ultima series in that they came across as a game within a game, which is of course exactly what they were back in Ultima 1. This was especially the case with Ultima 4 introducing the tile-based rooms within the dungeons which arguably provided the main challenge in this part of the game but left the player constantly swapping between viewpoints. On the whole I’m all for the variety this offered but the 2D dungeons here are almost as much fun as their counterparts and do feel more cohesive within the context of the rest of the game.

The reduction in difficulty is more than negated by the fact that I’m unable to save in the dungeons. There also appear to be unavoidable monsters strategically placed around some levels which make life trickier still. Without the mystic armour I wasn’t really entirely ready for Hythloth despite leaving it so late into the game and ended up casting Exit from level 3 in a hasty retreat. 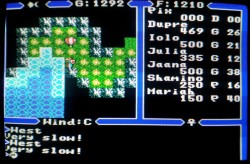 I headed off to retrieve the white stone using the balloon after this. One oddity here is that because of the control scheme it’s impossible to land on the appropriate tile and then search for the stone. The button that brings up the menu with the search command is also the same one that puts me in the balloon and launches it meaning that I have to search while airborn swooping up the stone as we fly past. 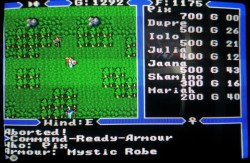 By this point I’ve reached level 8 and can grab the mystic weapons and armour (or robes in this version). Money is not plentiful in this game and most of my party had been going around with no protection whatsoever prior to this and armed with no more than slings. 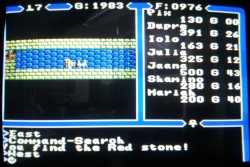 The next stop was Destard. Having the mystic robes certainly helps here and for the most part my largely inexperienced party is able to cope well. The exception is when I run into enemies that can cast sleep which are the bane of any band of would be heroes in Ultima 4. I manage to locate the altar with the red stone although I’m not sure the altar tile graphic would convey what it was if I didn’t already know.

When playing U4 I would usually flit between dungeons via the altar rooms at this point picking up all the stones as quickly as possible. I attempted that here but started to get nervous with not being able to save the game and my party struggling with some encounters. I’d hate to lose an hour or more of gameplay so after raising the stats of the front line of my party via some orbs I beat a retreat back to Lord British to heal up.

I’ve amassed some gold throughout this last dungeon raid so the plan now is to blow the lot on reagents and go back in far better armed this time around. I think some liberal use of up and down spells is called for to speed things along a bit. I’ve still some way to go but part 4 should see me to the end of the game. Before that tomorrow marks the 5 year anniversary for this blog so I really should do something to mark the occasion. I’ve no idea what that will be yet but you can expect a post or two when I figure it out.