Before I start this post apologies for the even worse than normal “screenshots”. Sunny days and a roof window do make for a good combination when taking photos of a glass screen. I should have been out making the most of the weather really but Ultima 4 had to be finished. I’ve already said about everything I want to about the game so this post is just going to be tidying up. 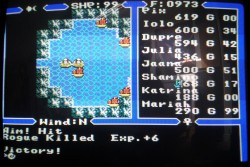 I had originally planned to do some dungeon delving for gold + stats at the end of part 4 but after gathering a small pile of mandrake and nightshade I decided that I was probably up the job as was and headed in for another go. I ran into a slight bug around this time with the first digit in Shamino’s health being replaced with a random symbol – this seemed to occur when shifting party order around as I’d put Katrina and Mariah up front for a while to raise their levels. The bug wasn’t a big deal although I never had any idea how much health Shamino had from this point on. 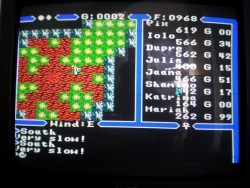 I enter the abyss once again… 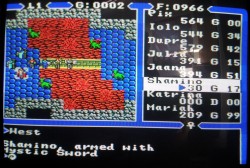 … to be faced with the same lava filled rooms once more. Only Katrina fails to make it through them this time and I’m equipped to cast resurrect this time to get her back. 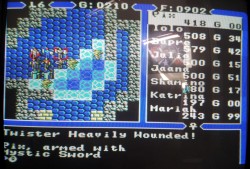 Progress after this is slow and steady once more. The room that did for me on the first attempt is still not easy but quickness spells just about get me through it with Iolo once again having to charge a forest of Reapers single handed. This room was by far the toughest one in this version of the game. 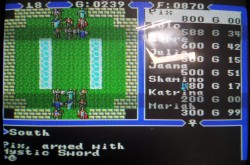 With no saving allowed making it to the bottom of the abyss is quite an expedition and must have taken me going on a couple of hours before I made it to the famous room where I get to fight my own party.

It may take some time but playing through all the rooms in the abyss again is immensely enjoyable though. My memory is nowhere near up to remembering how to get through them all and figuring out all the secrets adds a welcome puzzle element in these later stages. The amount and variety of gameplay packed into U4 for a 1985 title never fails to impress. 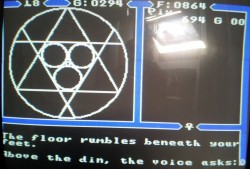 For the final part of the game, I have to enter all the virtue question answers manually. This means no picking off a list which is probably as well as I’m sure I didn’t learn everything I should have while playing. 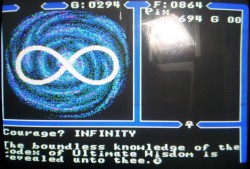 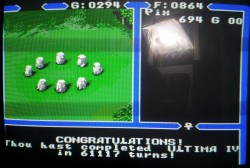 After which my quest is over and I’m returned to Earth with my example of Avatarlyness having been set back in Britannia. It’s a slightly ignominious ending after such an epic quest really but somehow fitting and hinting at future sequels. It’s all there anyway and looking a whole lot better than in EGA just like the rest of the game.

It’s a pity this isn’t the version of Ultima 4 on GOG really as it’s considerably more accessible than the DOS one. I’ve seen numerous posts on the forums there from people who can’t even get past the menu screen since the arrow keys and mouse don’t work. Maybe GOG will start supporting emulated games one day. Whatever the availability, I’ve got a new answer for the next time someone asks which version of Ultima 4 they should play. If I ever find a copy of the FM Towns version, that could well change again of course.

It’s been a while since I plugged a Kickstarter but the guys behind The Neverhood are trying to raise the funds for a new game called Armikrog. This will be a claymation adventure game in the same style which is easily enough for me to back it.

Not sure what game will be coming up on here next. Definitely not an RPG as I’d like a change of pace but there are several space shooters I’m considering so probably be one of them.