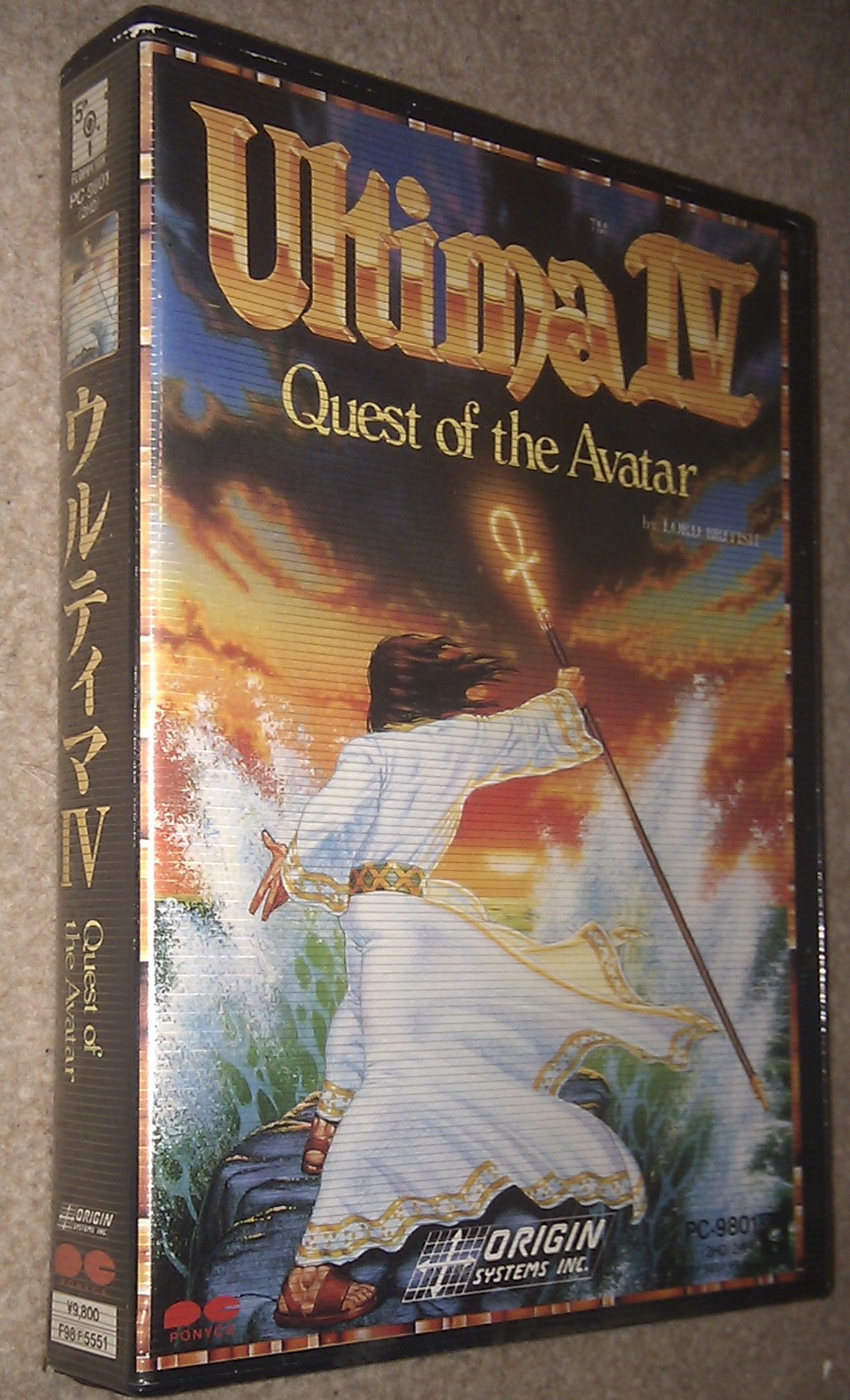 Ultima 4 on the PC-98 is one of my more recent acquisitions and it was my first (and so far only) purchase off a Japanese auction site. I’ve never really gone in for collecting all the foreign versions of games but I was intrigued enough by this to want to try it out and above all I liked the price. 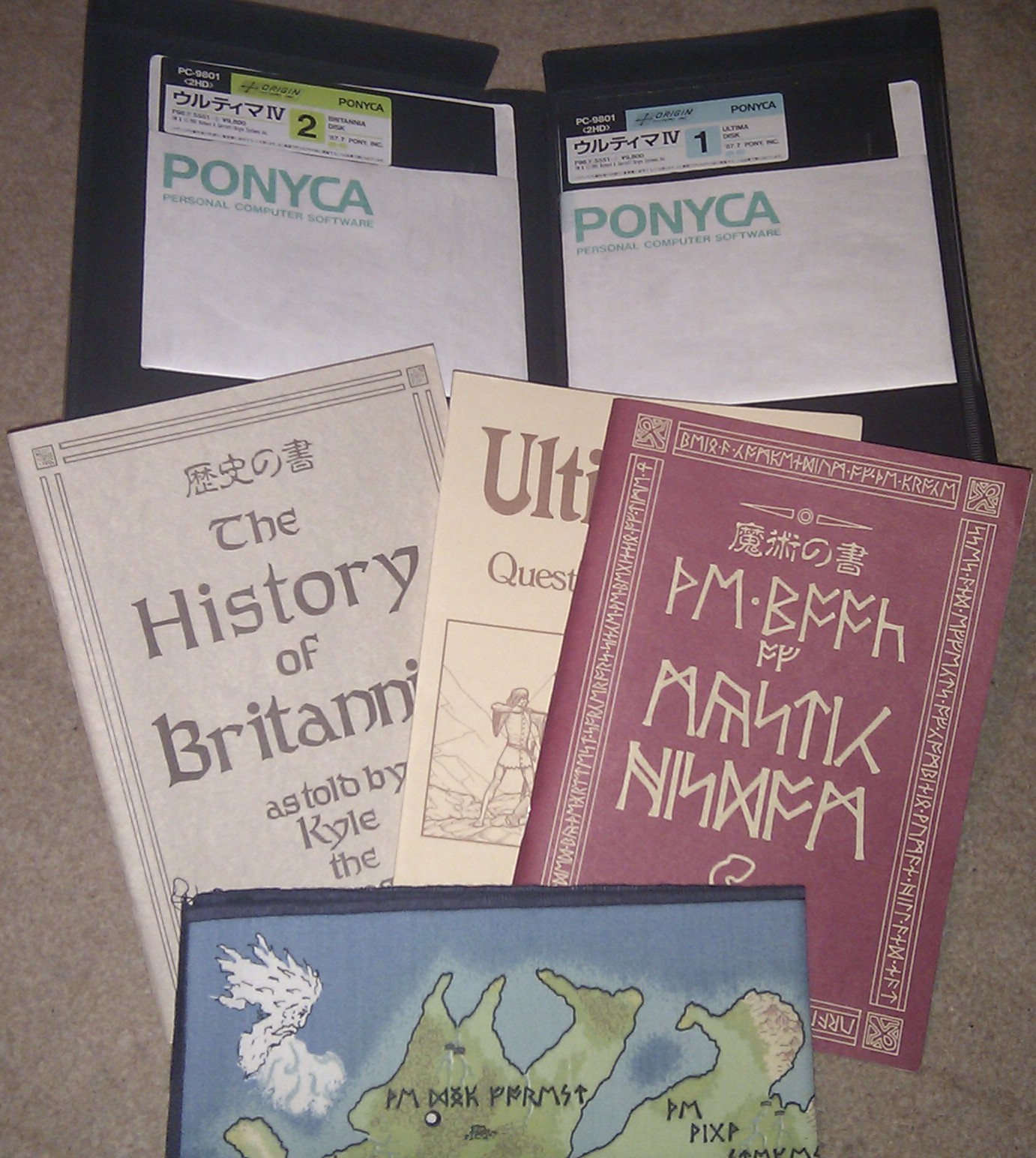 It was published in 1987 (according to the title screen), converted from the original by Pony Canyon, and comes in a plastic case which is a lot tougher than the old cardboard boxes I’m used to. I do prefer the more traditional boxes but this still looks like new 20 years later which is a definite advantage. The documentation is a close reproduction of the original (after being translated), with some snatches of English in there. It’s a nice package overall, only let down by the disks themselves which look completely out of place.

The PC-9801 was a Japanese computer system which I’ve not had any exposure to until trying to run this game. They were an expansion to the earlier PC-88 series and were around for many years but little seen outside of Asia. It was an IBM-PC variant but had its own features such as high-resolution graphics. Combined with the inevitable advances in technology since their original release, this meant that ports of familiar games to us Westerners often got something of an upgrade when they were made, Ultima 4 being no exception. There is an excellent article at Hardcore Gaming 101 on Japanese systems for anyone who wants to know more.

An upgraded Ultima 4 has to be worth a look so I thought I’d see if I could get it running. I naively went into this expecting not to have too much more trouble than running a game using any other emulator. I couldn’t have been more wrong.

First off, there was the matter of getting the game onto my computer. Whatever your take on roms and abandonware, it has to be said that the internet is a great resource for being able to get hold of games that you do actually own but wouldn’t be able to play otherwise. That is unless you own it for PC-98 it would appear.

I was able to find a very few sites with PC-98 roms and thought I had lucked out when one of the first claimed to have Ultima 4 disk images. However, it turned out to be a misnamed Ultima 6 so that was no use. This left me downloading “complete” romset torrents for the system none of which turned out to be complete enough to include a single Ultima either.

At this point, my final option was to try to read the original disks. I’d already had a go at this with the Kryoflux and not got a usable image out of it. It would have helped if I knew or could find the technical specs for PC-9801 disks, as native support isn’t built into the Kryoflux software. I went back for a second attempt though and after some fiddling around I figured out that it would read them if I changed the revolution rate to 360 and upped it to 1024 bytes per sector, instead of the usual 512. I now know that the disks use a format with 77 tracks, each with 8 sectors and each of those having 1024 bytes making it slightly larger than a regular 1.2 Mb HD floppy. It uses a regular filesystem however, and while WinImage didn’t think much of the image due to its strange format, all the files were visible and extractable using MagicISO.

Now I just needed an emulator. There are several of these available although they were all developed in Japanese making them a little hard to use at times. I did find English translations of all of them however so I didn’t have to work out the menus by trial and error. The three that I actually got working were Neko Project II, Anex86, and Visual 98, all of which are reasonably easy to set up and use once you have found the required ROM’s. I’ve heard that which one of these a given game will work with is a case of trial and error, but most games should potentially be runnable in at least one of them.

Having got the disks imaged and the emulators running, the hard part should have been out of the way but this is where things started to go wrong. Just to be awkward, each of these emulators has its own floppy disk format none of which appear to be used anywhere else. This left me looking for a tool to convert disks and the only one I was able to locate was vfic (Virtual Floppy Image Convertor). I initially found this in Japanese and Greek but there is an English version available on the authors website.

Vfic is a simple app which you drag your floppy images onto and it spits them out in one of the other formats. This is great for converting images between the different emulator formats but it doesn’t support regular ISO/IMA images so it turned out to be a dead loss from my point of view. I looked around for a convertor to one of the other vfic formats so that I could convert the disk in two stages but got nowhere. 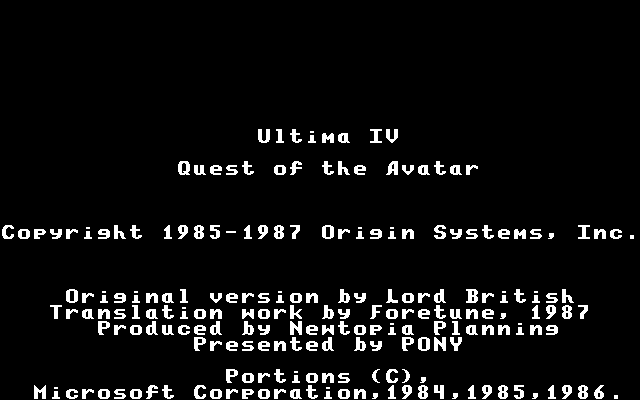 My last resort was to copy the game files onto an existing disk image – this is complicated somewhat by the fact that all these PC-98 games are booters. I found another tool for this job called DiskExplorer which entirely failed to read blank disks created by the emulators (probably because I hadn’t formatted them), but would read the Ultima 6 disks I’d downloaded earlier and allow me to edit the contents. I got rid of the U6 game files (leaving the bootup system files behind) and shovelled the Ultima 4 files in there via MagicISO. When I booted this up in an emulator, it got as far as the first text title screen at which point it would crash.

I nearly gave up here but I reasoned that since it had different system files on the U6 floppy, I might do better with an alternative operating system. This led to me hunting down a copy of DOS for PC-98 which I found on an Italian website of all places. Rather than keeping it simple and having the 3 disks in a zip file, it had them in some format that could only be extracted by vfic which I’d thankfully located earlier. I’m glad to say I didn’t have to install DOS on a virtual HD and could simply boot the PC-98 from the first disk and quit out of the shell that launched. This leads to a regular dos prompt which works with the same commands as good old MS-DOS. 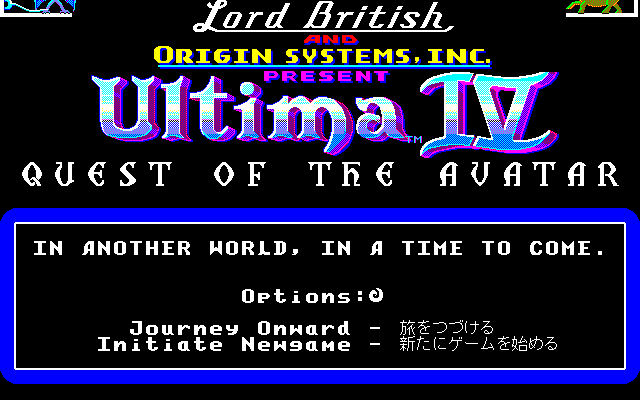 From here I put the hybrid Ultima 6/4 disk in the other drive, ran U4.exe and it ran all the way to where the music should start and hung. I turned off the emulated sound hardware, tried again and finally had the game running or at least the introduction sequence. As soon as the character creation is over and the game starts it appears to keep asking me for Disk 1, although given that it’s in Japanese I could be entirely mistaken on this. There was an anomaly on the final sector of both disks when I was imaging them. This may be standard for PC-98 for all I know, but I’m assuming that it’s copy protection which isn’t on my recreated disks and it refuses to start the game. 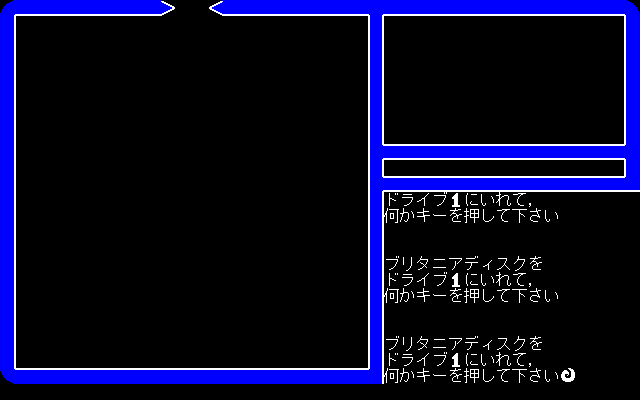 So that’s as far as I got after several hours of trying. The issue might not be copy protection but it’s hard not to think that being able to use the original disk images wouldn’t help. Even then the protection may not be stored in the IMA. My only other idea is that it could be something to do with having to create a player disk. I may play around with it a bit more before I give in. Any ideas on how to get this working would be very welcome in the meanwhile, or just a set of ready-made working disk images for that matter. I’ve found the ideal forums to ask for help but 24 hours later my registration confirmation email still hasn’t arrived so I can’t actually post anything.

Since I spent so long on it, I’ve attached screenshots of all the intro gfx below. As can be seen, they are faithful to the original but at a higher resolution and don’t look bad at all. At least that’s some reward for my efforts but I’d love to have at least tried the main game and walked round a few dungeons. It would have been tricky to play it properly what with it being in Japanese and all, but I reckon I know it well enough that it might be doable. 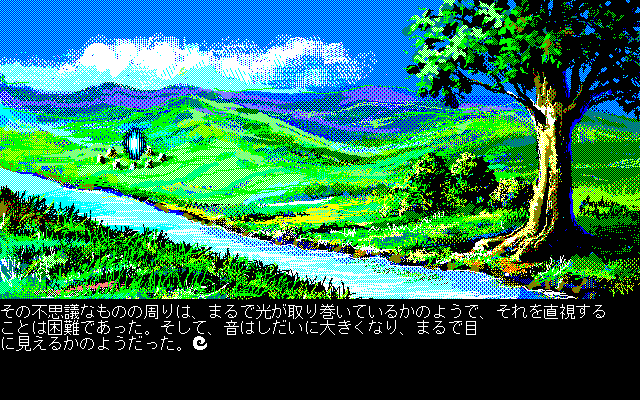 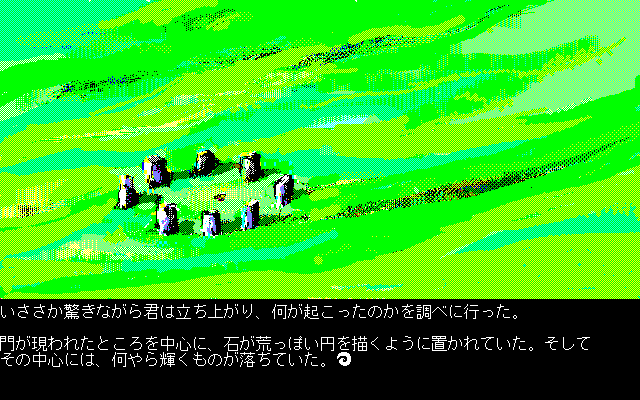 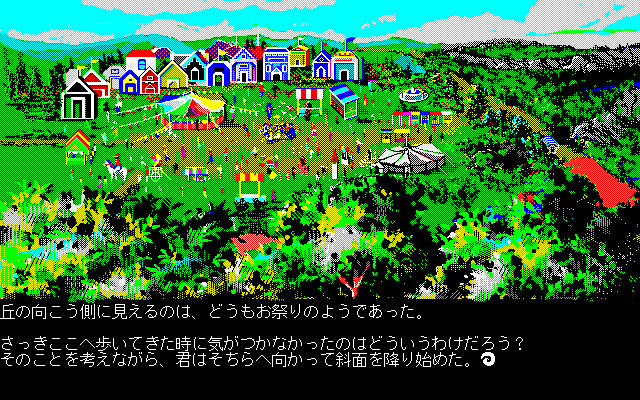 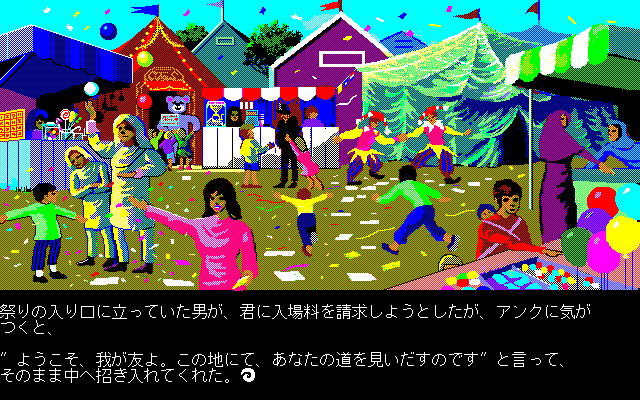 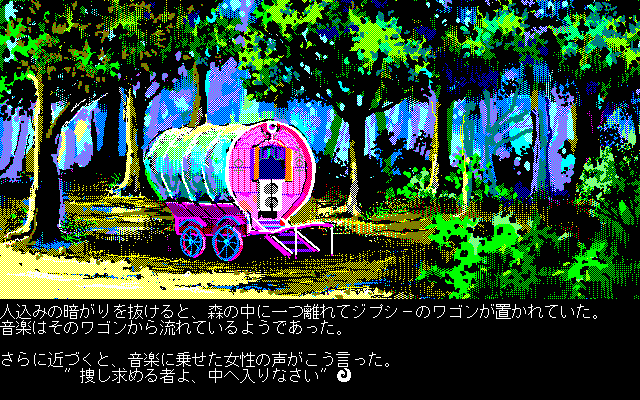 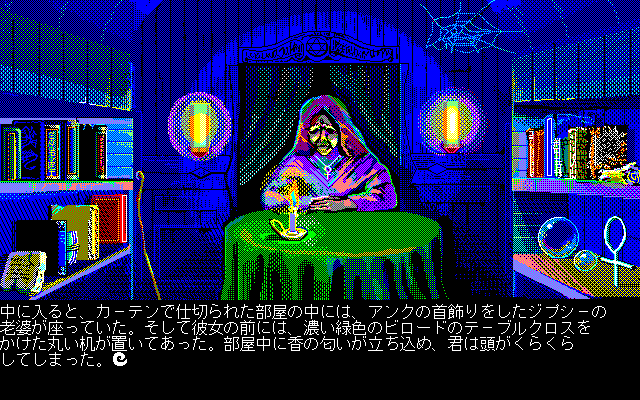 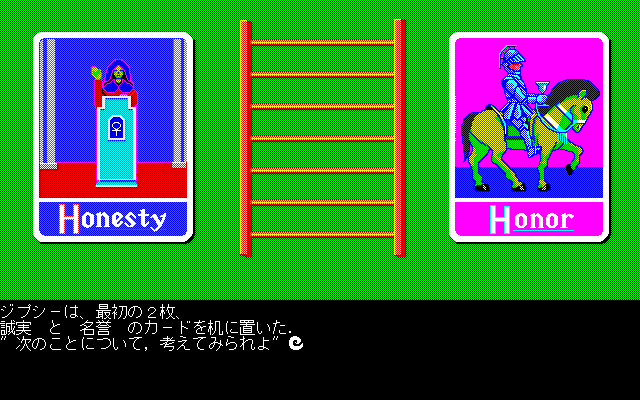 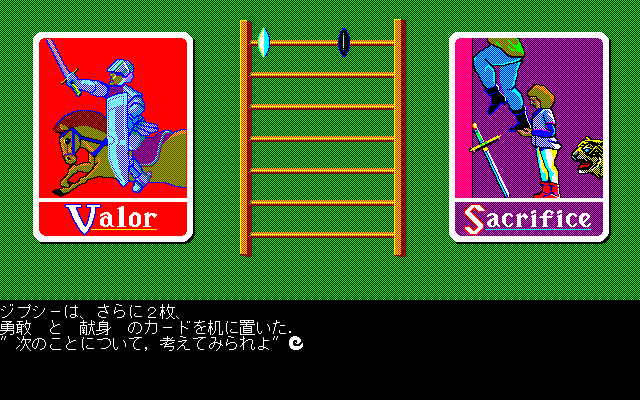 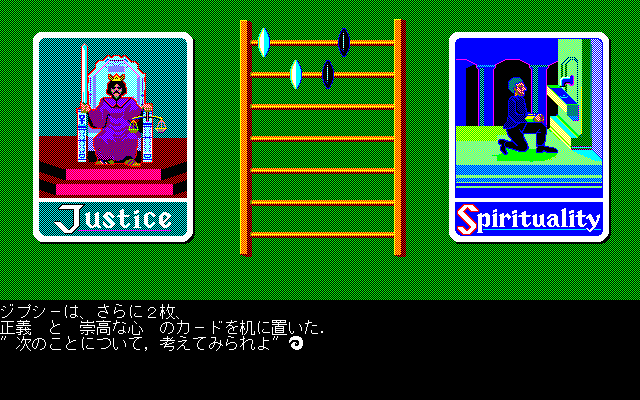 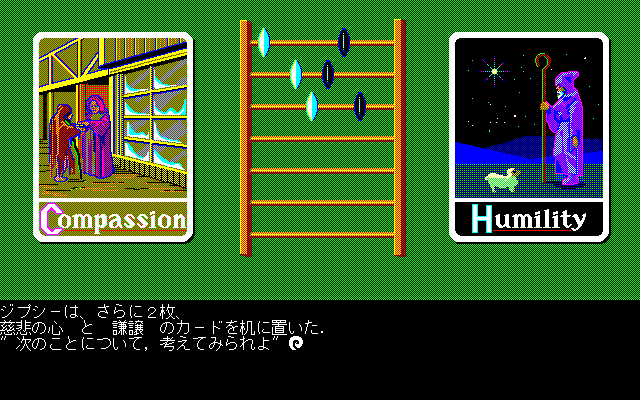