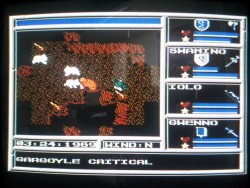 The first dungeon I decided to tackle was Covetous due to it supposedly having the Avatar’s Arms at the bottom of it which sounded like they would be just the ticket for exploring the depths. The dungeons turned out to be quite large despite the move to 2D and I didn’t get the impression I was being short changed by the dropping of 1st person perspective and missing floors. They aren’t especially visually interesting of course but the maps sped me through them and I didn’t spend a lot of time exploring. The maps don’t show the exit to the underworld on the bottom floor so I had to stumble into that myself but it was reasonably easy to guess. 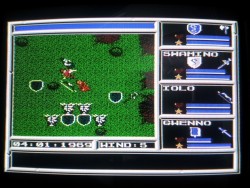 The underworld is lush,green and not all that dangerous making it quite the different experience to what I remember. From the few sections I’ve been to so far, each dungeon has is own little independent underworld with no blinking required (or even possible) to get around the map. Each dungeons underworld section just had one area of interest which I’d stumble across after a bit of aimless wandering. The picture above shows the Avatar’s Arms which were full sets of magic shields + armour for the party with a magic bow, axe and sword thrown in. These made my party more or less invulnerable and my Avatar could take down near enough anything in a single hit with a magic sword. I should definitely have come down here much, much sooner.

I thought I’d sell off some spares and ran into another strange quirk with this game in that merchants will only buy very specific items of armour or weapons so none of them were interested in any of the better items I’d found. Gold is strangely difficult to come across as monsters don’t drop any either meaning that the only source is the stock piles in dungeons as far as I can see. It would probably be quite easy to get into a position where you had spent all the gold in the world with this system.

A side effect of the above problem is the lack of inventory space which is a fair enough constraint except it’s only possible to discard and not drop items in a cache somewhere. I didn’t try it but I presume it would be all too easy to make the game unwinnable in this way. 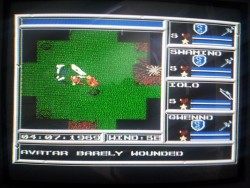 Now I was well armed, I headed for another dungeon to start collecting shards. The first of these went without a hitch and I killed off the appropriate Shadowlord at Empath Abbey.This scene was more than a little anticlimactic on the NES but headed for Deceit to fetch shard #2. 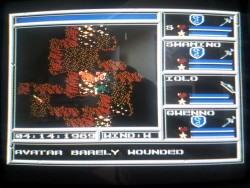 This is where it all went strangely wrong. I followed my map taking a route which went down to floor 2 then back up to floor 1 in a separate area and then followed this to where there should be a ladder back down (the rightmost brown square on the screenshot above) and there was no ladder! I searched the whole level looking for an alternative unsuccessfully. I then watched the appropriate bit of the playthrough on Youtube to see what they had done and the ladder was there exactly where I’d been looking.

I’m entirely out of ideas at this point – no ladder means the game is uncompletable so this attempt to play the game has come to a grinding halt without any other suggestions. If anyone has run into this before and/or knows what I can do to fix it please let me know. I’m suspecting there must have been a bug in some versions of the cartridge at this point but maybe a certain conversation will make it appear?

It would have been nice to finish having got so far but I’m not going to miss playing the rest of the game too much in all honesty. I dare say I could speed through it considerably quicker if I were to ever try again on emulation now that I know the ropes. but I’m not too anxious to do that either right now. I don’t think this port is as awful as I’d heard but it doesn’t have much to recommend it. Every criticism I’ve got seems to be down to a lack of space and power on the NES. If this porting to U6 had been done on the SNES it could easily have ended up being the definitive version of the game so it’s a real missed opportunity in my eyes. We do have Lazarus however which I still have to play for myself and will surely get around to one of these days.