I’ve a couple of press releases relating to Ultima 5 to share today. First up is this two page news release from September 1988, proclaiming the release of Ultima V on Commodore 64/128:- 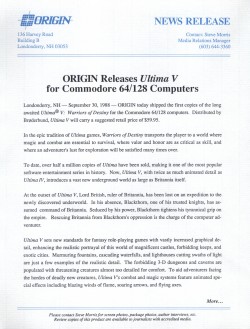 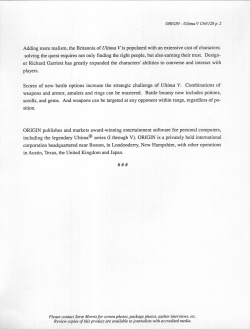 Two weeks later, Origin also produced one of their regular press releases for the game with the summary on one side and the product fact sheet on the back. I’ve not got the final version of this but I do have the constituent parts. This first page below would have been printed on Origin headed paper when it was sent out:- 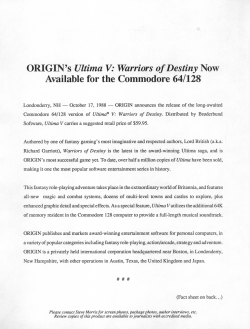 This mentions the soundtrack support on the 128 version although the majority of people who only had C64’s might not have seen this as much of a selling point. As an aside, there was a largely forgotten PC sound card (the Innovation Sound Standard) which used the same SID chip as the C64/128. This came out around the same sort of time as Adlib & Roland cards, but perhaps not surprisingly never took off against the competition. It’s got an Ultima connection though as Ultima 6 was one of only 15 games (according to Mobygames) that ever supported it. Getting hold of an ISS card is a near impossibility these days but there are versions of DOSBox around with emulated support if you want a C64 style soundtrack with your Ultima 6. This also applies to Bad Blood and Windwalker.

To get back to the matter at hand, I’ve two versions of the product fact sheet which would have been on the back of the page above. Both are design documents prior to the final version, with the first not having any graphics and the later second version having been rearranged to accommodate the appropriate box image and logos but these logos have been stuck on afterwards by hand:- 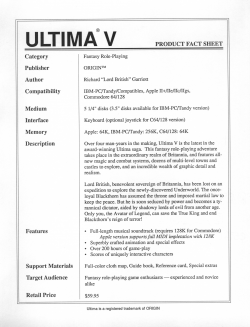 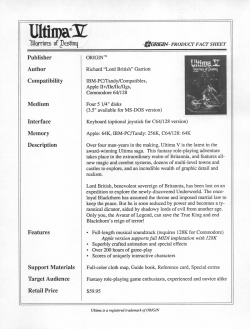