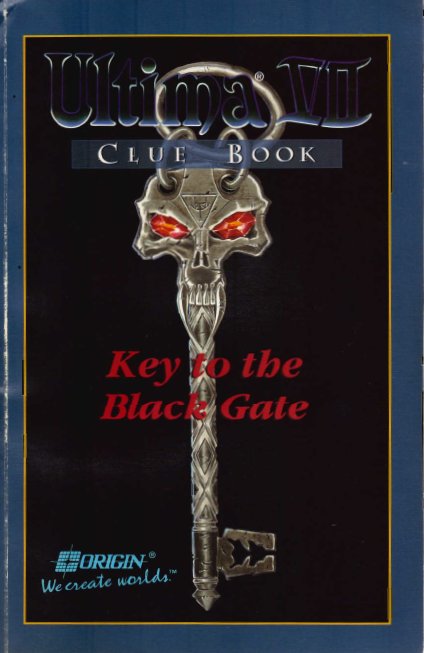 This book was published in 1992 by Origin. I scanned this and the Serpent Isle equivalent back in October 2008 and uploaded them to replacementdocs.com. 2 1/2 years later, they still languish on the uploads queue so I’ll give up waiting and host them myself. The U7 cluebook can be downloaded here. The scans were done on my newer (and much cheaper) scanner so between that and my unwillingness to flatten the books they aren’t always the best quality around the spine but they are good enough to read.

The format of these cluebooks is following a set formula by now and this is little different. The book is presented as a guide prepared in advance for the Avatar to use once he has arrived in Britannia. Each of the places are described by a character from the game who has some association with it giving you a slightly different perspective for each place. After this section concludes with the dungeons, there are tables of data with merchant prices, spells, weapon/armor effectiveness, trainers and healers.

The last major section is the usual walkthrough although this takes a slightly unusual format in that it is a question and answer session with the wisps and timelord. This is more like the sort of thing you would see in a Sierra hintbook, with a general question then answers which are progressively more revealing. With a game that is so open right from the start, this means you could potentially scan through for an appropriate question rather than reading the whole thing. The problem with this is that many questions refer to the answers already given so you would have to proceed through each town in roughly the order expected for the question to mean anything. It’s a lot less fun to read than the standard narrative walkthrough from the other books but would potentially spoil the game less, if you can stop yourself reading the wrong bits inadvertently.

Reading through all these cluebooks is making me want to play some of these games again, especially Ultima 7. I’m certainly enjoying Knights Of The Old Republic but any of the titles I’ve looked at today are better games in their own right at least from what I’ve seen so far. I expect that I’ve still got most of KOTOR to play through so I’ll see how it develops.