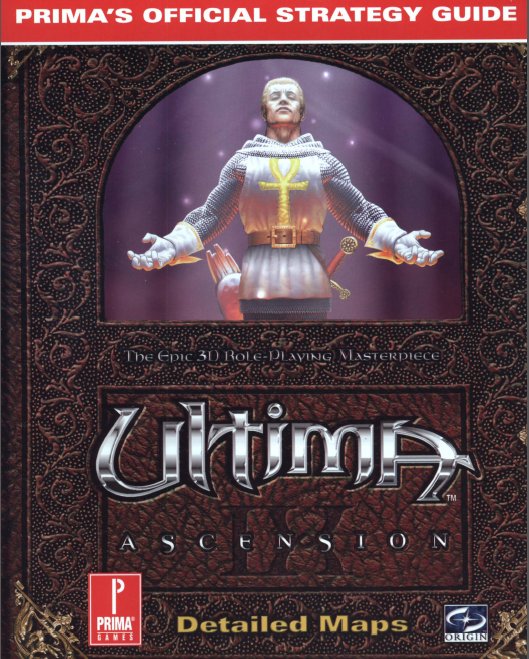 This is the last of the Ultima game guides that I’ve still to look at and was published in 1999 by Prima. It’s the largest by some margin spanning over 300 pages making it around the same size as the Ultima Collection guide which covered the rest of series in a single book.
Nearly half of these pages are taken up with a full walkthrough in both bullet-point and more expanded form. The lengthier version doesn’t take the form of a true narrative so it isn’t anything you would want to read if you weren’t looking for help.
The early pages start out in a more old-school style and are written as a guide to the land by a sailor from Buccaneer’s Den. This gives a quick tour of all the towns with the maps that you find in game before the pretense is dropped and the rest of the book just gives you information about the game.
This information is much more detailed than the earlier official guides giving tables of merchant prices, details about character creation (including all the gypsy’s questions), equipment lists, a transcript of the Avatar’s journey, bestiary, spells and more. All this information was probably needed less in Ultima 9 than the rest of the series but it’s still good to see it here.
The most interesting sections for myself were the Tales Of Virtue, and the interview at the end of the book. The Tales Of Virtue were originally released one at a time on the Ultima 9 website while the hype was being ramped up before the game’s release. They take the form of a fable about each virtue, each involving one of the eight companions from Ultima 4. They aren’t relevant to the game directly but are a great piece of Ultima folk lore in their own right.
The interview with Richard Garriott is massive and takes up about a fifth of the whole book. It’s a reproduction of the same interview that was in Avatar Adventures with some new sections added. These new parts are not added in a lump but are edited into the original interview meaning that you have to sift through it if you are looking for the new stuff. The interview does skip backwards and forwards thanks to this and is a little disjointed. I’d rather have seen the two kept separate but it might not be an issue if I hadn’t read Avatar Adventures in the last couple of weeks.
A lot of the talk on Ultima 9 is about leaving the land in a state where the people can look after themselves which was one of the main premises for the game. I can’t say I found it especially evident when playing the game although I do remember Lord British getting out and about a couple of times. Something else that caught my eye was that Mondains Gem was involved in creating the Guardian and it is mentioned that the Shadowlords themselves were formed from the Avatar’s evil half before coalescing into him. I don’t remember this being in the game but it has been a few years since I played it. Not all of the new stuff in the interview is about Ultima 9 and if you ever wanted to know why Dupre asked if you wanted to buy a duck in Ultima 2, you can find out here.
The book is interspersed with some superb concept art for the game, and there is also a tapestry of the ages poster in the middle of the book. I’ve done my usual patchwork job of scanning this in.
I prefer the old style of Ultima cluebook but for what this lacks in atmosphere, it makes up with in size and it’s especially nice to see that the Tales of Virtue got preserved somewhere a little more permanent now that the website is long gone.