I’m not entirely sure I’m supposed to talk about it, but it’s common knowledge that there was an alpha test some months back for Ultima Forever where a lucky few were invited to give the forthcoming game a spin and provide feedback. This was an extremely brief affair but I’d set aside an evening for it which ended up coinciding with my town getting flooded and me being without power until the next day when the alpha had finished. Missing out on this still bugs me but I got off extremely lightly compared to others around here so I should hardly complain about not being able to play a video game.

None of those taking part were expecting anything but packages have been arriving over the last couple of weeks and near enough anyone reading this has probably seen the photos already. I wasn’t sure I’d be getting one of these under the circumstances but look what arrived today:- 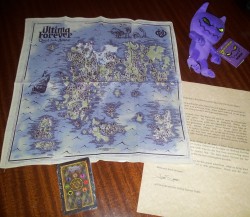 Extremely cool and the letter is a nice touch also, (the talking demon doll by the way is part of the Reincarnation Kickstarter awards which also just showed up). I feel kind of guilty getting these having not actually taken part in the alpha but many thanks to the U4E team for coming through anyway, I’ll give them a good home and promise to make up for lost time with a voluminous amount of feedback when the beta rolls around.