I made it safely back home and have a couple of jobs to do around here. First on the list, a patch was released while I was away which fixes the earthquake and white noise effects in Ultima 7 on Dosbox. I’ve added support for this to the Ultima Patcher.

I can report that my luggage also made it back safely which was something of a concern as I was carrying 3 glass items, one of which was a serious lump. Airport security initially took some offence to that particular collectible but let me keep it in the end. I have the perfect occasion to post about that coming up next year so I’ll hold onto it until then. The other two were a nifty short glass gifted from the WC CIC and better still an Origin beer glass. Along with the WC3 prop glass, I think my drinking needs are pretty well covered although I wouldn’t say no to an Origin-themed shot glass if there is such a thing:- 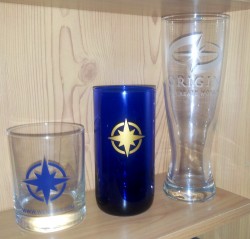 It’s not likely I’ll ever be able to return the favour for the CIC glass with any merchandise of my own but I did send off the Wing Commander 4 35mm movie trailer to be converted to HD digital today and should hopefully have that to share sometime next month.