I’m usually happy to use emulation rather than collecting an array of old systems but I thought I’d make an exception the other day when I got the chance to buy a pocket PC for pocket change. 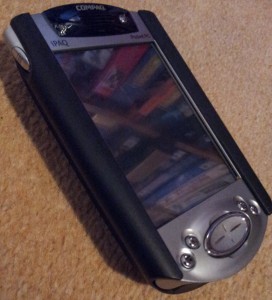 The device I bought is a Compaq iPAQ H8370 and looking at it, it’s not all that surprising that these things are cheap nowadays. It’s heavy, not all that fast and you would need some capacious pockets to lug this thing around in. With the expansion pack installed, it’s a brick by any standards. Mobile technology really has come on in the last 10 years and since the battery on this doesn’t hold a charge, it doesn’t even count as mobile any more. Even worse, all the programs on the device are stored in RAM and maintained by the battery so I have to set it up every time I plug it in.

All of this combines to make it a completely obsolete and on the surface useless piece of hardware but it does have one saving grace being the only mobile platform to get a port of Ultima Underworld. This port was published relatively recently in 2002 by Ziosoft having been developed by Paul Neurath’s company Floodgate. With Underworld being a personal favourite, I’ve always been curious about this port and I’m long overdue to try it out. 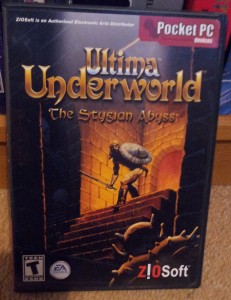 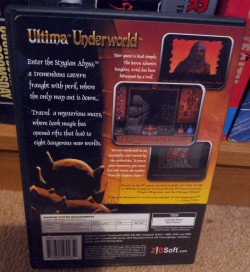 First off, it has to be said that the screen on the iPAQ isn’t a patch on what you would expect on a modern phone and not all that clear even on maximum brightness. The screen is recessed well into the front of the device behind some extremely thick glass. It’s clear enough to see what is going on at least but it does need to be held quite close to be playable. It’s probably the single biggest drawback of this port but it may have been better on other devices.

Visually, the game itself looks like a carbon copy of the original. The sound has some changes with the first couple of speech samples from Balron Almric not sounding quite right, almost like they had been pitched down. The music uses a marginally more realistic set of instruments to the MT-32 with the hitch that it stutters which is something I could live without. This particular model of iPAQ is specifically supported by the game according to the box so it shouldn’t be the hardware at fault here. I’d probably have to turn the music off if I were to play the game for any period of time.

The interface is more or less the same as ever, except I don’t have any way to right-click which makes everything slightly more fiddly. On the PC, I would rarely touch the icons on the left using the various clicking and dragging options on the main window. Those gestures don’t work here, forcing me to use the icons and making the game slower and more difficult to play. It’s still mostly playable using just the stylus with the buttons being only used for some occasional actions like jumping.

The exception is during combat where touching the screen sets up the sword swings and I have to use the d-pad style button to move around. Moving with the d-pad is workable but jerky and slightly uncontrollable. Other than that running around is fairly smooth. It’s certainly better than my 386SX ever managed if nowhere near a decent 486. The options for changing detail are still in the menu but trying to change them doesn’t do anything so it’s full detail or nothing.

If I fixed the battery on my iPAQ, this is as portable as Underworld gets and all the game seems to be there without being simplified or dumbed down. I still can’t say that I’ve been entirely won over by this port but it’s the limitations of the device to blame more than anything. The text on the screen is tiny and the iPAQ doesn’t sit well in the hand when held sideways like this. It’s not quite as quick as I would have liked either with this lack of speed being the biggest problem with the d-pad controls which rely on smooth turning. Having said all that, it’s still very playable. If you do want to play a game on your Pocket PC this may well be as good as it gets but I can’t imagine those criteria applying to many people in 2012.

I could see UW working fairly well on a modern smartphone on the back of this. The source code must still be around to have made the Pocket PC version in the first place so maybe another port could happen at some point. I can guarantee at least one sale if we ever see an HD remake.

There are a distinct lack of screenshots on this post. Adapters were made for capturing video from pocket PC’s but I don’t feel too inclined to track one down just for this, so I thought I’d point my webcam at it and record a short gameplay video instead. This video is the sort of quality you would expect (wobbly and out of focus), but it gets the idea across. If anything the picture looks clearer on the video than in real life:-

My thoughts on Wing Commander Saga should be up next post as I’m nearing the end. I was expecting the final missions to keep getting harder but if anything it went the other way and I’ve made it to what I think is the last mission without too much difficulty compared to what went before. I’ve only had the one attempt at this last mission and got blown up 35 minutes in, but I have some ideas on what to try next time. With a mission that long, I need a large block of free time before I have a second run at it.