Just about all of today’s Underworld posts are going to involve various Underworld relics I’ve been able to acquire. The first of these is a laminated carboard stand with one of the commonly used magazine adverts for Underworld + a little extra information around the frame. I’m not entirely certain but I think that this was probably used by Origin themselves at a trade show rather than in game stores. I’m only speculating there so if you know more than I do, I’d love to hear from you. 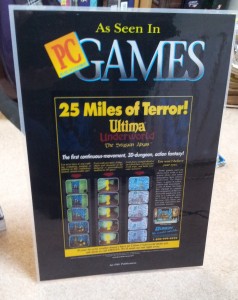