I managed to get my C128 mostly fixed this weekend after some DIY chip surgery with the slight hitch that while everything now runs in C64 mode, I’m still not having much luck in 128k mode. I suspect I have more soldering ahead of me but I’ve been having too much fun playing Impossible Mission among others to put too much effort into sorting that out. For now, I’m dragging myself away from C64 nostalgia for a long overdue look at Wing Commander 3 on the 3DO. 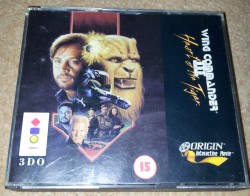 This was released a year later than the PC version in 1995. I’ve got the UK release which unlike it’s American equivalent only came in this unimpressive jewel case. I’ll have to put that right and get hold of the USA release at some point but they all play the same at least. If I’m playing a port of a game I know and love, what I’m looking for is something that is different enough (for better or worse) in it’s own right to offer a new experience or something that improves on the original technically. I’m glad to say that this is one port that delivers on both.

I’m back to my phone-cam for screenshots so apologies for the blurred photos. First up the movie segments, which in 16-bit colour on the 3DO are a monumental improvement. WC3 was one of the first games to attempt full screen SVGA FMV and it showed with giant artifacts whenever there was too much movement going on. It was all massively impressive at the time but this looks so much better with richer colours and a sharper image. Not to leave it there, the sound is also clearer and in Dolby Surround if you have the hardware for it. As for movie content I’ve noticed some tiny extras such as Rachel commenting about not trusting her judgment when I wanted to change my loadout but 99% of the time the movies themselves are the same we all know and love. Paladin still sounds like he is calling Blair Larry throughout the intro, the guy with the glowing purple sticks is still just as awestruck at seeing every fighter land, etc..

All of which is well and good but the flight engine needs to be up to the job. The 3DO was judged as not being quick enough to handle ship interiors it would seem as each mission now starts outside the Victory and there is extra FMV to show Blair’s fighter taking off. I immediately thought I’d try flying back inside to see what would happen but I ended up inside a mostly invisible Victory so it’s clearly not something I’m supposed to be doing. 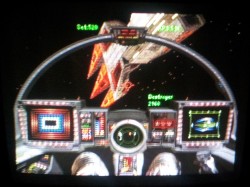 Flying into capships is a pretty insignificant loss as the rest of the engine looks superb. The 3DO’s extra colours are used to great effect with full colour FMV communications, better texturing on capships and more colourful explosions. Unlike the PS1 port, there is also support for a cockpit view which is all part of the WC3 experience in my eyes. Controls are fairly intuitive with the CH flightstick offering enough buttons to make life easier than other Wing Commander ports I could mention. That isn’t to say you don’t need to read the manual to learn button combinations but I’ve found it easy enough to learn the essential commands.

The engine isn’t quite as smooth as a fast PC if I was going to be critical but the framerate is more than playable and I’ve not noticed any slowdown whatsoever. I’ve also been surprised by the loading times or lack of. The missions took forever to load on an average PC of the day despite the hard drive installation, this is all loading from a relatively slow CD-ROM drive but doesn’t take more than a couple of seconds.

So far I’ve talked about technical differences but where this port really branches away from the PC is in the mission design which has been completely overhauled seemingly to make it more of a straight shoot-em-up game. The new missions are recognisable but offer a very different experience with larger numbers of easier to destroy enemies. The early missions proved to be especially easy and when I managed to take down a destroyer in an arrow without breaking sweat I was wondering if there was going to be any challenge in this version. I’ve still not finished the first CD though and started to find things far, far more difficult in the last couple of missions with enemies suddenly keener on using missiles. I’ve not noticed any warning when these are coming in so I’ve not quite sorted out a strategy as of yet. 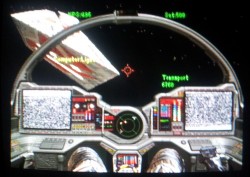 Other differences have been a whole new Kilrathi transport which looks much more angular and Kilrathi-like than the flying girder on the PC. There was a mission which took me into an asteroid field where the asteroids were plentiful enough to actually get in the way. They looked a whole lot like scaled animated sprites actually just like in WC1 & WC2. I’m hoping to see more of these later on as they were something of a loss in the PC port.

When it comes to saving the game to finish this session, even the ships terminal has been given a makeover with transition animations when you log on or move between screens + the saved game reports on how the ship morale is and which series and mission the game is at all of which is a nice touch.

The bottom line is, I’m loving this. It’s still WC3 but not as I know it. The gameplay isn’t necessarily better and has tended to have less to do with the briefings (e.g. the skipper missile never showed up) but it’s a fresh experience for a jaded wingnut and still every bit as fun in it’s own way. I’d go as far as to say this port has the potential to be my favourite version of the game but I’ve got a long way to go yet so I’ll have to wait and see on that.