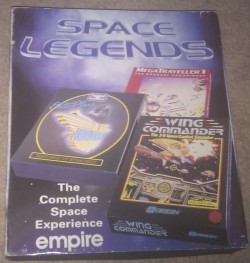 Wing Commander was published on the Amiga in 1992 after being ported by a single programmer Nick Pelling. Loaf has written up a history of its development so rather than repeat it all here I’ll instead point at the thread here.

I imagine that a port of Wing Commander would have been a point of honour at the time for Amiga owners. When it came out the Amiga was way ahead of its time and easily the most advanced gaming computer commonly available. Wing Commander perhaps more than any other game heralded the start of the power shift toward PC’s.

When I decided I was going to play this I bought the regular version off Ebay, except the seller decided that he didn’t actually have one to sell after I won the auction. Rather than wait for another I figured that I may as well get a compilation edition instead in the form of Space Legends. This was released for DOS and Amiga in 1993 and also contains the excellent Elite Plus and Megatraveller 1 (which I’ve never played). 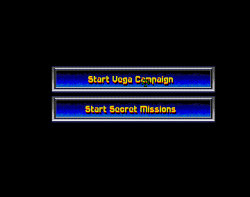 The decision to aim for a target audience of A500 (the affordable model) of the Amiga, was a little surprising and led to the game being done in only 16 colours to get performance up. It’s certainly contrary to how Origin usually worked which was to make the games you wish you could play if only you could afford the system. Games like Wing Commander drove PC hardware more than anything else in the early 90’s and were the first thing you would buy for your new PC when it became affordable. There must have been a plan to also release the mission packs for the Amiga since SM1 is in the opening menu but these were never seen on the system. 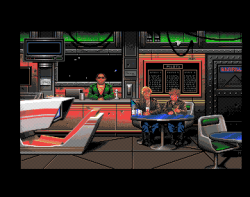 The 16 colour dithered graphics are better than I might have expected but could have been better still in the sense that some of the dithering isn’t needed. On occassions, even the text at the bottom of the screen ends up being dithered. 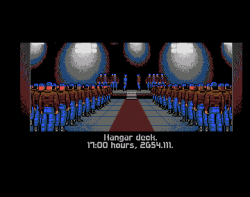 The colours are at their worst with the spotlights in the background which look like giant pool balls more than anything else. These are the exception though and the game looks fine the rest of the time. 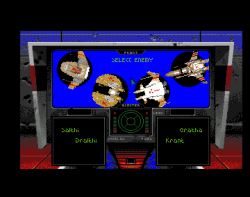 Looking for changes in the Amiga version is tricky as it is incredibly close to the original. The starting screen for the arcade game in the bar is the biggest change I’ve found so far with its spinning ships. 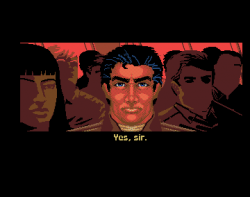 Other than that, the briefings are there in full…. 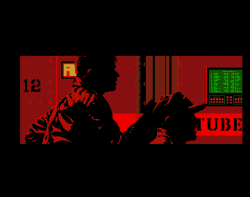 … and the launch sequence looks much more like the PC version than the demo I tried out a couple of days back, as does the landing sequence. 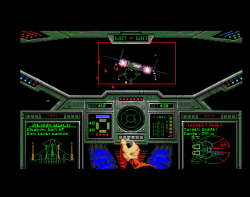 In the cockpit, everything is as it should be and I’m instantly at home with the keyboard controls which are copied over from the PC. The speed through the emulator is excellent although I am playing with it cranked up to maximum. It does grind along if I drop it to A500 speed so it may not have been the best way to play the game even with the reduced colours.

There is one major hitch in that the game doesn’t support analog joysticks. I was looking forward to finally playing one of these Wing Commander ports with a real joystick but I’m stuck with digital controls once again. The emulator does allow me to use my analog joystick but it’s only turning it on and off when I move it enough in one direction and this just didn’t play right. I tried using a gamepad but this left it hard to use the keyboard commands so I’ve ended up resorting to playing the old-fashioned way with cursor keys. I can’t have played a Wing Commander like this since the early 90’s. 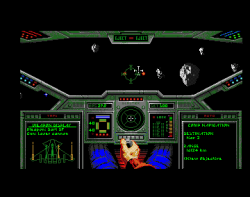 The handling of the ships is exactly as I’d expect other than having to repeatedly press tab to keep my atferburn going because it doesn’t allow me to steer and afterburn simultaneously. That aside, if it wasn’t for the lack of analog control’s this could almost have been the EGA version on the PC (if there had been such a thing) except for one thing which I haven’t mentioned so far, the sound.

Back when all of us PC users were stuck with beeps, the Amiga had a multi-channel sound system which allowed 4 sampled instruments to be played simultaneously. These instruments were created with digital samples which were tuned up and down in a slightly similar manner to a soundfont. In theory this allowed for much more diversity than General MIDI, although the small number of channels was a serious compromise. When used well the audio on an Amiga could be quite something although I always through it worked better for some types of music than others. PC programmers eventually figured out how to do the same thing with games like Pinball Dreams being among the first to support it, although it had already been seen in demos before this. The only Origin games to generate their music this way were the Crusader games which I would have thought must have been among the last games to support it.

This very different format means that the original Wing Commander soundtrack has been given a complete overhaul. It’s still all the original pieces but they never sounded quite like this before. I have heard it described as the best version of the audio. As far as I’m concerned, anyone who thinks this doesn’t own an MT-32 but you could certainly make the case when compared to Ablib. Some of the music translates better than others but there is a definite loss in subtlety and it’s apparent that instruments are being forced to cut off short or are missed out due to the 4 track limitations. It’s still my favourite music out of the Wing Commander ports but I’d rather have the original.

The sound effects in the cockpit are lacking also with no noticeable sound when I score a hit. After the clunking digital effects on the Sega CD this is quite a change and it’s not always easy to tell when I’m on target. It’s only a minor quibbly though and not an entirely fair comparison. An MT-32 would probably have cost about as much as the A500 on it’s own. The Amiga does have the advantage of digital fx for firing guns and the like. 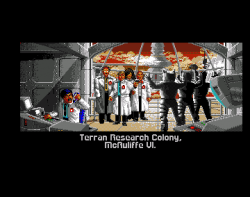 Another tiny change I’ve noticed is that when I link up with escort ships, they say “Well done Sir” for some reason and I don’t see them when I autopilot. Other than that, it’s business as usual. The difficulty level is the same as the PC from what I’ve seen, making it slightly harder with these controls. My wingmen have been getting occassional kills which wasn’t the case on the Sega CD but I’m not so sure about the PC version. They may be more intelligent but I’ve played that many versions of Wing Commander recently they are all blurring together. I’ve been skipping through a lot of the conversations for that reason but they have been identical from what I’ve seen. 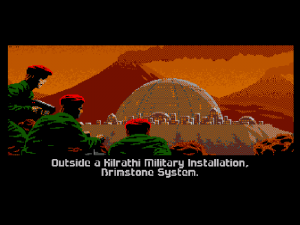 I’ve got as far as the second cutscene, almost halfway through the game. Unless it starts to vary more from the PC original, part 2 of this could be an extremely short post.