I’ve still not started on F-15 but I have been reading one of my recently purchased books, the Wing Commander Confederation handbook. 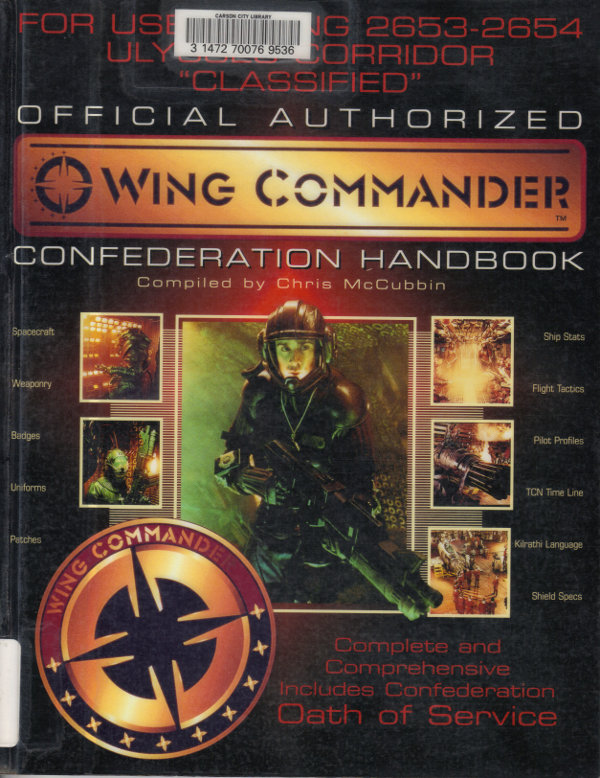 You’ll notice from my scans that this is a second-hand copy, originally from Carson City Library over in the States. It still has the sheet with the date stamps in the front and it was borrowed all of 3 times from 1999 when the book was published. Not what you would call popular then. 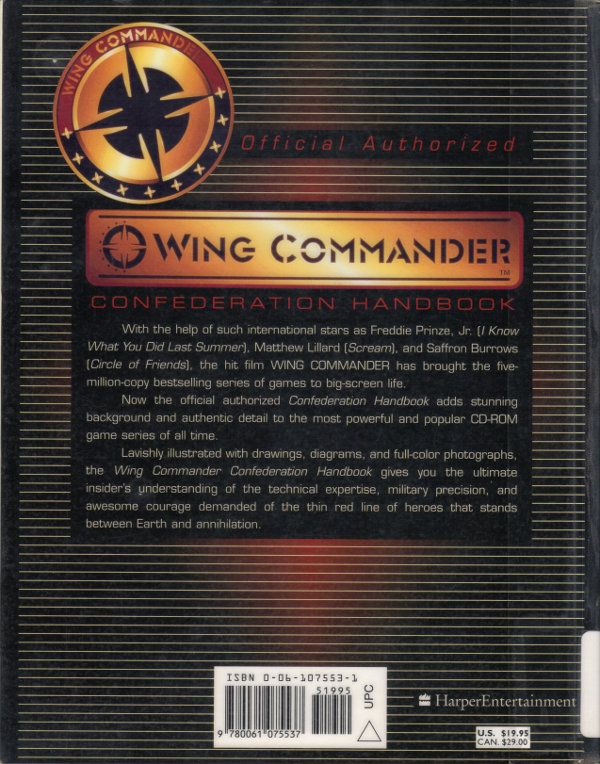 The term handbook is misleading since this is several times larger than your average paperback. The book is a guide to the history Wing Commander universe, clearly brought out to tie in with the movie rather than being aimed at fans of the games, despite what it says on the back cover. Large format colour books like this immediately make me think that it will be full of photos and not much content but there is a reasonable amount in there, even if it’s not what you would call heavy reading.

The book is 128 pages long, with the first half being in full colour and the second half giving way to black and white which is a little cheap in a book that would have cost $20. The content is best described as scene setting for the movie with information on characters, ships, history of the war and details of the technology used in the movie. It is presented as though you are using an information terminal, complete with buttons at the tops of the pages and headers with metadata. It’s all a bit unnecessary but may have appealed to a younger audience at the time.

If they are aiming for a young audience then some of the technical information is possibly over the top, with for instance details of how the jump drives work that contain lengthy details about graviton particles being used to create gravity wells, and objects on the event horizon of the well instantly hopping over the “gap” it creates thanks to the medium of subspace momentarily filling in the hole and bridging it. The science doesn’t quite stack up if you ask me but it’s a decent attempt at explaining jumping. I always enjoy sci-fi when it actually contains some science and it doesn’t happen all that often.

There are photos and stats of all the ships in the movie, with schematics of the Concordia. These aren’t especially interesting and I’ll never like the movie ship designs which look even worse in still photos. There is more pseudo-science about how the ships engines work. Apparently, they use a fusion reactor which powers itself with matter gathered from space using gravitic scoops which extend over a large area around the ship. These scoops cause a friction like effect as the ships speed up, which is why they handle the way they do and have top speeds. I may have missed it elsewhere but that’s the first explanation I’ve ever seen for this. It goes on to say that going faster increases the rate and which fuel is spent but this is balanced out as collection is increased since the scoop is travelling through a larger area of space. Afterburners, however, burn up this fuel and it has to be replenished by the capship. The obvious problem with all this is that if you are flying in a wing of fighters, the collection spheres would overlap and you would all run out of fuel.

Other parts of the book deal with the history of Earth venturing into space, including the war with the Pilgrims. This isn’t part of Wing Commander as far as I’m concerned but it comes across better here than it did in the movie. There are then technical details on marine equipment (basically an excuse to use some prop photos), background on all the characters in the movie, a thesis on the abilities of the Pilgrims and the book finishes with some correspondence between Taggart and Tolwyn as he is sent off on his secret assignment. The content is generally quite random and jumps around from one page to another. By the end, it covers more or less everything you could think of without actually saying anything about the plot of the film. Basically, if the film had been packaged like an old PC game, this could have been the manual.

There are no real revelations about Wing Commander in here but I still quite enjoyed reading this one. I would have enjoyed it more if it was based on the game rather than the movie universe but it was a whole load more interesting than the movie itself. Right now I can’t recall any aspect of the movie I actually liked so that’s not a glowing endorsement but clearly a reasonable amount of effort went into creating the universe for the movie to be set in. It’s possible that I might even like the movie slightly more if I were to watch it again having read this. I’m not sure I’m prepared to take that risk though.