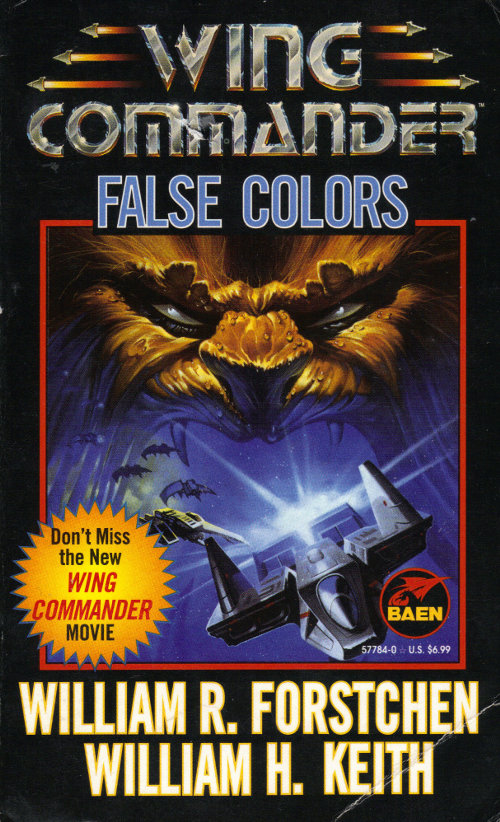 This is the final book in the original series of Wing Commander novels and was published in 1999 by Baen. Despite what it says on the cover, it was written by William Forstchen and Andrew Keith. What Mr. Keith thought of them getting his name wrong on the cover I have no idea, but it doesn’t say much for quality control. At least they got his name right on the inside pages.

The plot involves all the same characters that have been in the earlier books, i.e. Bear, both Tolwyns, Kruger (the border world president), Sparks, Doomsday, etc… It seems somewhat far-fetched that they always end up involved in all these things but it does add continuity.

The story is set after Wing Commander 3 but before number 4. A Kilrathi supercarrier is involved in a battle near a brown dwarf star. It wins the combat but with no shields all the crew receive a lethal dose of radiation, which also stops the ship from self destructing. The ship is later discovered by the border worlds and Tolwyn, Bear and all the rest are sent out to repair it. The reason the border worlds need the ship is to fight off a Kilrathi lord who is trying to seize territory and take over where Thrakhath left off. Confed is of course ignoring the problem so the border worlds buy up decommissioned ships and recruit personnel where they can. 2/3’s of the way through the book, we discover that a Kilrathi dreadnought is being prepped to attack the border worlds and this ship is so massive it would threaten Earth itself. The new force goes on a suicide mission to destroy it, narrowly escaping thanks to Kruger and his fleet showing up at the last moment.

There is an underlying element of conspiracy in this novel also. We learn that there is a group of senior military figures who plan to overthrow the Terran government. They had planned to do this during the Kilrathi war which was why Tolwyn rushed the Behemoth project in an attempt to end the war before this happened. This group is also trying to engineer the new war so that they can take over with public support when the current government is made to look inept. It’s clear that Tolwyn himself is even scheming further than this and already has his GE project in mind. He has a much more complex character here and it would have been interesting to see where this went in later novels if there had been any. I gather this was to be the first in a new trilogy which never happened due to the death of Andrew Keith, although I expect the Wing Commander movie might not have helped either.

The book starts out fairly well but I have to say that the middle sections of the story dragged badly. It’s 50% longer than anything else in the series but there wasn’t quite enough extra content to justify it and it could have done with some more editing. The chapter where they go into the detail of repairing each section of the supercarrier one by one was excruciatingly tedious. I’m glad to say that it picked up again after this and overall the book wasn’t a bad effort. There was a bit of intrigue to the plot and it was a definite step in the right direction. It may have been intended as the start of a trilogy but it sits fine on its own and does bridge the gap between Wing Commander 3 and 4.

It does seem to me that this series of novels hit its high points in the first couple of books. I think it’s partly a lack of ideas since then.  There were plenty of familiar scenes in this and the last section of the book played out just like End Run with a few of the characters swapping places. I’ve enjoyed all of the books to some extent but I’m definitely ready for something new at this point.