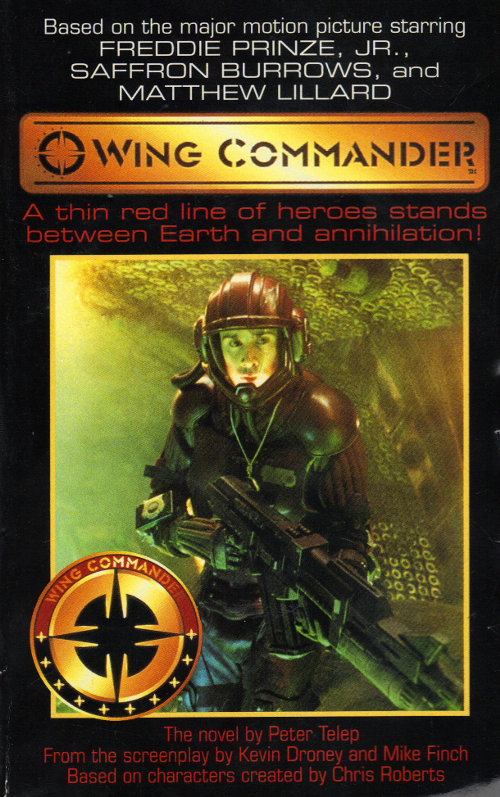 This is the eighth Wing Commander novel. It was written by Peter Telep and published by Harper in 1999. This is a new author from the previous novels and based on the movie rather than the game. I can’t say too many bad things about the movie so this wasn’t a book I was especially looking forward to. My main hope going into this was that it couldn’t be any worse than the film. It’s quite a short book which can be read in not all that much longer than it takes to watch the film and there are 8 pages of colour photos from the movie in the middle of the book.

I won’t describe the plot here since I’ve been through it all before and the book sticks extremely closely to the movie. There is a little more detail with an occasional glimpse of things from the Kilrathi point of view. In the movie, they are fairly anonymous but here we get to hear a few discussions on battle tactics and the like. Their character is very close to that in the earlier novels with the same honour systems although they have dropped the annoying habit of describing everything in terms of the number 8. I.e. eight eights of fighters etc. This was getting old after 7 novels and it was hokey in the first place.

Another change from the movie is that Blair has a personal computer implanted into his wrist, complete with a holographic representation of the Wizard Merlin who pops up at times offering advice. This character is obviously there for comic relief and could have been the Jar Jar Binks of the movie had he been included. Thankfully, his use is sparing in the book so he just seems out of place rather than irritating.

Finally, there is a subplot with Pilgrim traitors within Confed and indeed Captain Sansky himself turns out to be working with the Kilrathi. He is exposed through Blair’s actions and commits suicide before anyone can get to him leaving Gerard to take over. The book even suggests that a war with the Pilgrims is about to break out again in its epilogue. I’ll presumably find out more about that in Pilgrim Stars when I get around to reading it.

As for the writing style, Telep proves to have some skill given what he has to work with. We are still stuck with the same storyline complete with the mystical Pilgrim element but it comes across far better with the extra exposition. Some of the scenes from the film actually work better in this form, such as Blair jumping through the gravity well which is more about what is going on in his mind than anything you would be able to see on screen. There is also some evidence of the detail that was in the Confederation Handbook I looked at a few months back being used for background detail giving it more of a sci-fi vibe.

Compared to the other Wing Commander novels, the characters in this were far more rounded and realistic and it was less childish as a result. Without the awful casting choices to cope with I actually had some interest in what happened to the main protagonists and I’m shocked to say that this book was actually quite good. My low expectations probably helped here but maybe there actually was a half decent film in the script if some different decisions had been made. It still doesn’t feel like Wing Commander but if you ever get the urge to watch the movie, I’d strongly recommend reading the book instead.

Speaking of which, there are actually two versions of the book. There is the one I’ve read and the “Junior Novelisation” which I’ve also got. Apart from it being a different shape and size, I’m unsure of the difference but I’ll have a quick look at it at some point. I’m assuming it’s a child friendly version of the book I’ve just read but there was nothing much in this that I’d consider particularly adult.