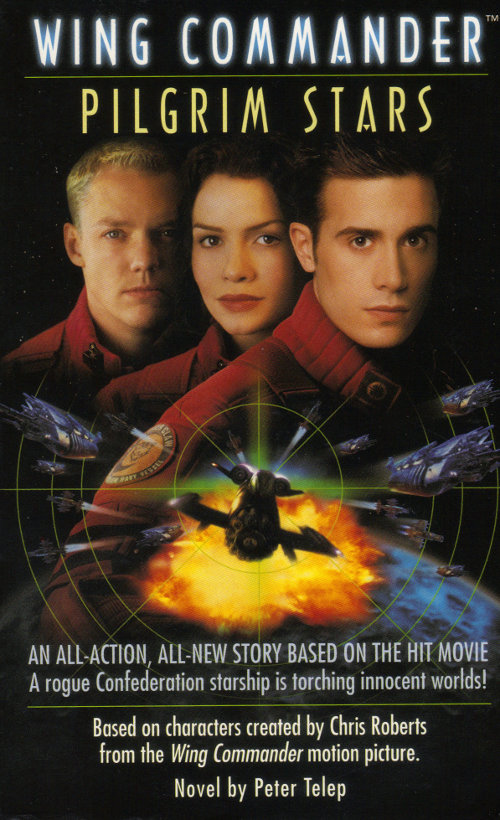 This is the final Wing Commander novel. It was published in 1999 by Harper Entertainment and written once again by Peter Telep. It follows on straight from the end of the previous book so is based on the movie universe rather than the game. However, in the acknowledgements at the start Telep includes the Wing Commander CIC so it looks like Wing Commander fans had some influence as well.  There was supposed to be a further book in the series after this but it was never published.

The story concerns a renegade Confed carrier called the Olympus which has been taken over by Pilgrims within Confed. This ship has the ability to create gravitational wells which suck any other ships in the vicinity into them. Since the ship is full of Pilgrims it can however use the well to jump to another system and escape. This potentially gives the ship the ability to destroy planets whilst also making it able to jump around without needing jump points. Both the Kilrathi and Confed want to stop and if possible capture the ship for their own uses. The Tiger Claw is the nearest to the scene and tracks the ship down only for it to use its well to escape. Blair and Taggart have in the meanwhile used their Pilgrim status to board the ship in an attempt to reason with its leader Amity. Maniac is taken along for the ride when he trashes his fighter.

Aside from the main plot, there are all sorts of relationships covered in this novel. Blair is still infatuated with Angel who is trying to avoid becoming close to anyone, although he is later distracted by his Pilgrim soul mate. Maniac finds another like-minded pilot to Forbes, but has to wait as she thinks he hasn’t gotten over Forbes. He eventually opts to become a one woman man. Paladin’s has the hardest time as his own Pilgrim soul mate is the one captaining the rogue ship.

The Pilgrim abilities go much further in this novel than the movie and some form of explanation is given for them. Apparently Blair’s abilities come from being able to read “scripts” left behind by previous Pilgrims who have already navigated all of space. Blair has other abilities similar to telekinesis which he discovers later on, from a woman who is apparently paired to him because of these abilities but is one of the enemy serving on the Olympus. This pairing means that each of them know the others thoughts to some extents.

To get back to the story, Blair, Maniac and Paladin end up on the Olympus, with Blair and Maniac spending weeks in the brig while Paladin attempts to talk round his ex to his side although it’s never quite clear whose side Paladin is on at this point.  Tolwyn in the meanwhile has taken the extreme action of getting all Pilgrims into camps and enforcing no fly zones in all their space. This results in Pilgrims starving to death and he sends an ultimatum that he will kill them all if Amity does not surrender by a certain date. Her response is to step up the attack on Earth but she is interrupted by an attack from the Kilrathi. Blair and other Pilgrims are forced to use their telekinesis to kill the Kilrathi from range but this leaves them all needing weeks of recovery. In the meanwhile, the Kilrathi regroup and attack again only for the Olympus to escape and jump straight into an ambush from the Tiger Claw. Paladin sabotages the jump drive and creates a gravity well too near to the ship allegedly to destroy it. Most of the Pilgrims flee including Maniac and Blair before they get sucked in. In the chaos Paladin is left behind but then helps the ship to jump the well and escape with Amity, leaving the threat still there for the next novel.

This book was quite a departure from the rest of series really, in both content and writing style. I much prefer Telep’s prose to anything from the earlier novels. The plot is far more complex with plenty of character development and enough originality to keep you guessing as to whats coming. I could summarise most of the other books in a few sentences and not leave out anything significant. Here I’ve done several paragraphs and missed out loads. On the other hand, I didn’t like the whole thing with Pilgrims in the movie and this takes it further still. By the end of the book Blair is able to step out of his body at will to fight marines with his mind. I like to see sci-fi and fantasy kept apart as a rule. This novel is faithful enough to the movie but it does seem to be a long way away from the Wing Commander I grew up with.

I think you could look at this book as the best of the series or the worst depending on how much resemblance you expect to Wing Commander.  As a fan of the WC games, I don’t especially like where the story was going and I’m not entirely sorry that the series ended here. Further novels would just have gone further and further from the games I expect. However, in its own right this was the best WC novel by some margin and I really enjoyed it. It’s a pity that Telep didn’t get a chance to do some of the earlier books as far as I’m concerned. I think he could have done a good job with them as he worked wonders from the starting point of the WC movie.

Peter Telep also wrote a trilogy of Descent novels which I’d be curious about as those games really didn’t have much plot to start from. I’ve far too many other books to be getting on with, to go looking for more anyway. I’ve only got 5 Origin novels left to read, but there is a huge stack of clue books left to be getting on with. I think I’ll pick off some of the smaller ones next and start getting the list down.