I went shopping for a frame for my certificate at the weekend. While I was out I found a shop selling them in all sizes unbelievably cheaply, so I thought I might as well buy several and geek out the games room a bit (not that it needed it). The biggest frame I bought was for a nifty Wing Commander Prophecy poster, done in the style of a movie promo with the credits at the bottom. These were only ever available at trade shows and to the developers so they aren’t all that common. Some similar posters were also produced in larger quantities in Germany which don’t have the credits. I didn’t actually have enough wall space in my games room for this so it’s hanging in the hall outside, mercifully hiding some of the wallpaper:- 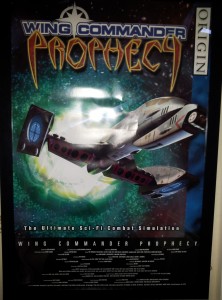 I’ve also got this developer version of the map poster that came with Prophecy. A decent photo proved impossible but the poster is exactly the same as the regular version as far as I can tell. The only difference is that unlike the ones in the box, it’s not been folded. I only have the room for so many giant Wing Commander posters on the wall so this one is going back to being rolled up for now:- 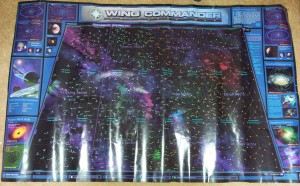