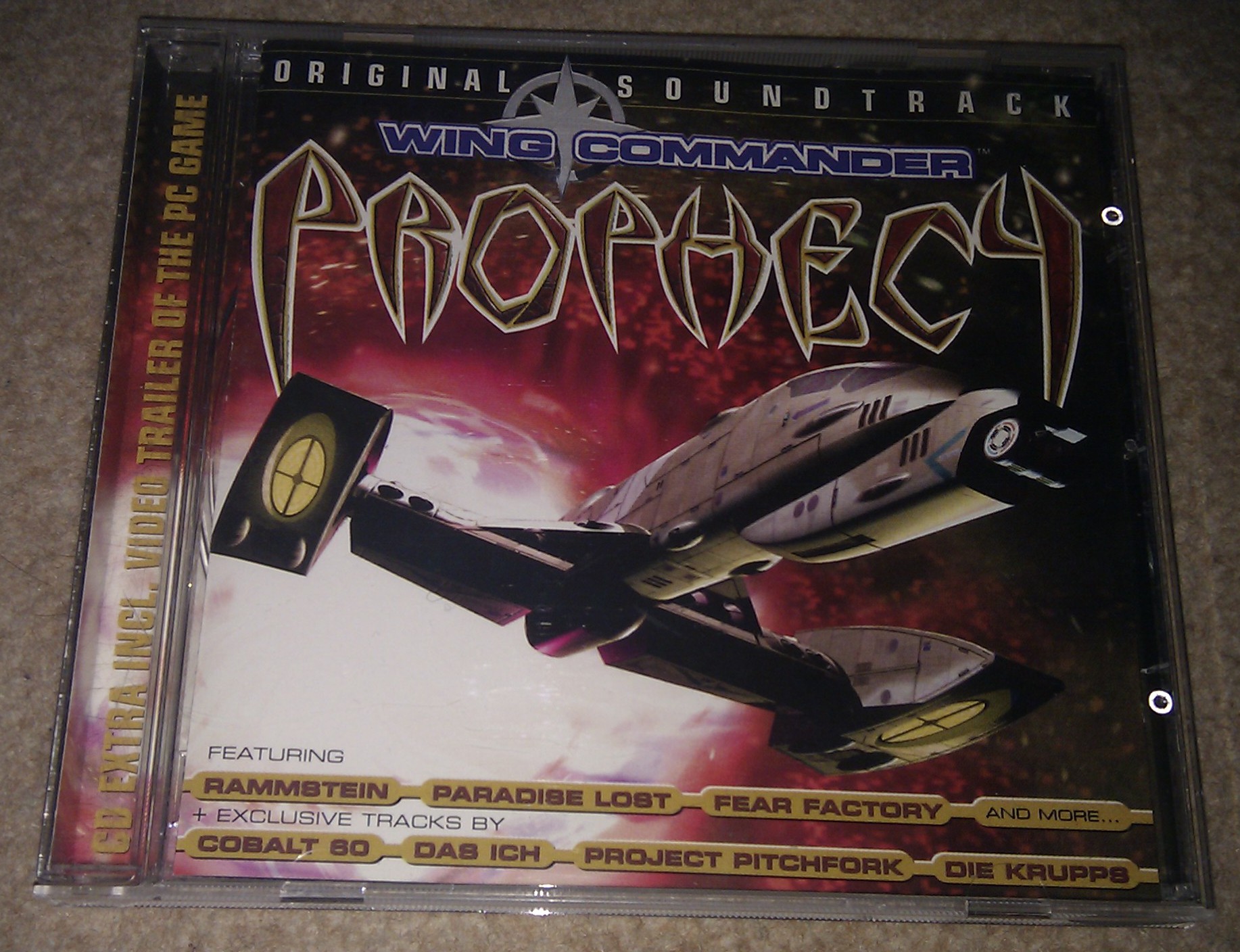 This soundtrack CD was released in 1997 and features 13 tracks allegedly either from or inspired by Wing Commander Prophecy. A copy found its way into my possession last week which I’ve managed to listen to several times since. 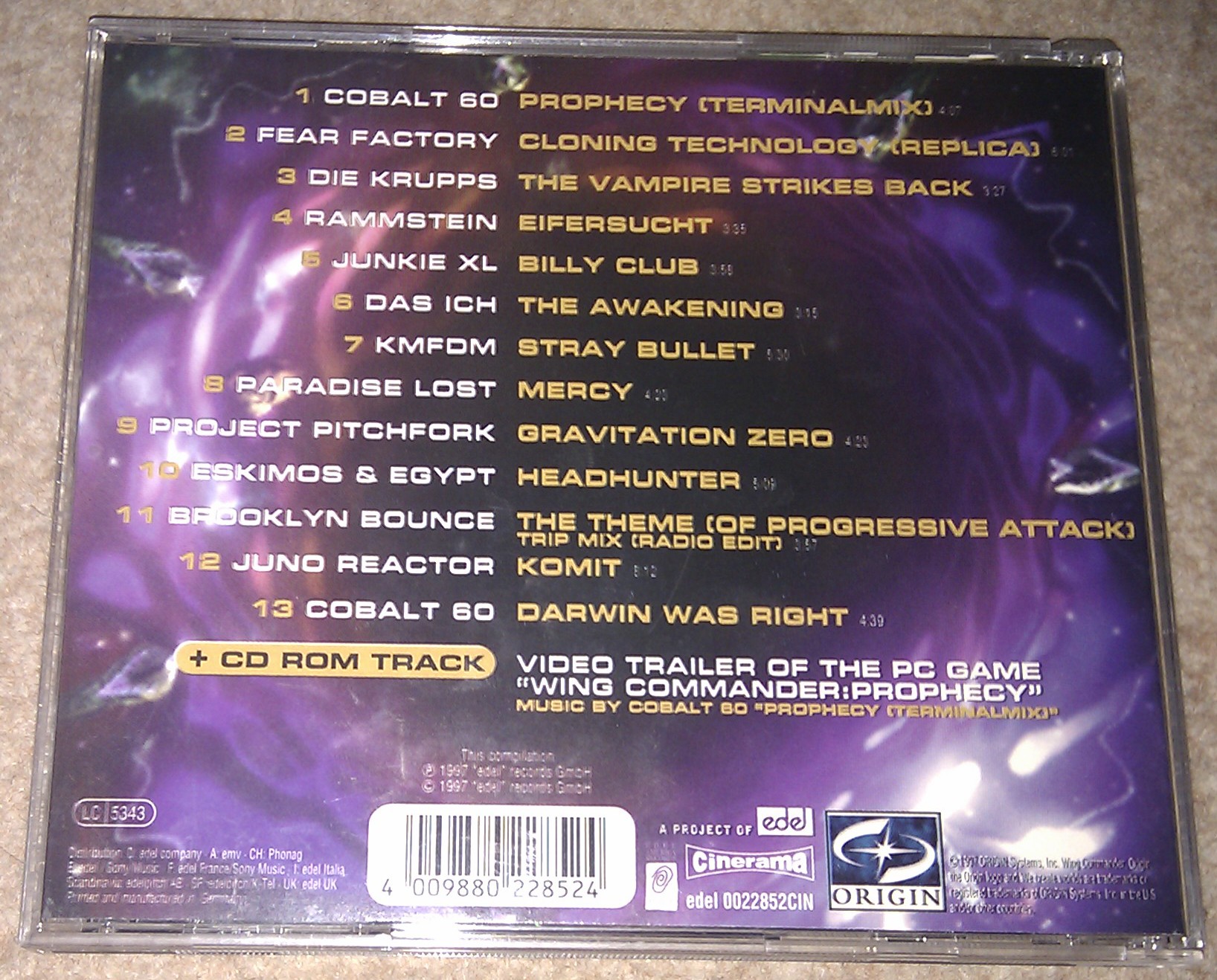 Apart from Cobolt 60 who have a couple of tracks, all of them are by different bands most of which are European. I can’t say I’m too familiar with any of them although Paradise Lost is (or was) a local band for me. So local in fact that one of the members used to live above the fish & chip shop about 30 seconds walk from my house. At least it was a fish and chip shop back then. These days it’s an Indian/kebab house that just got done for breaking food hygiene laws. I can only say I’m glad I don’t like kebabs… 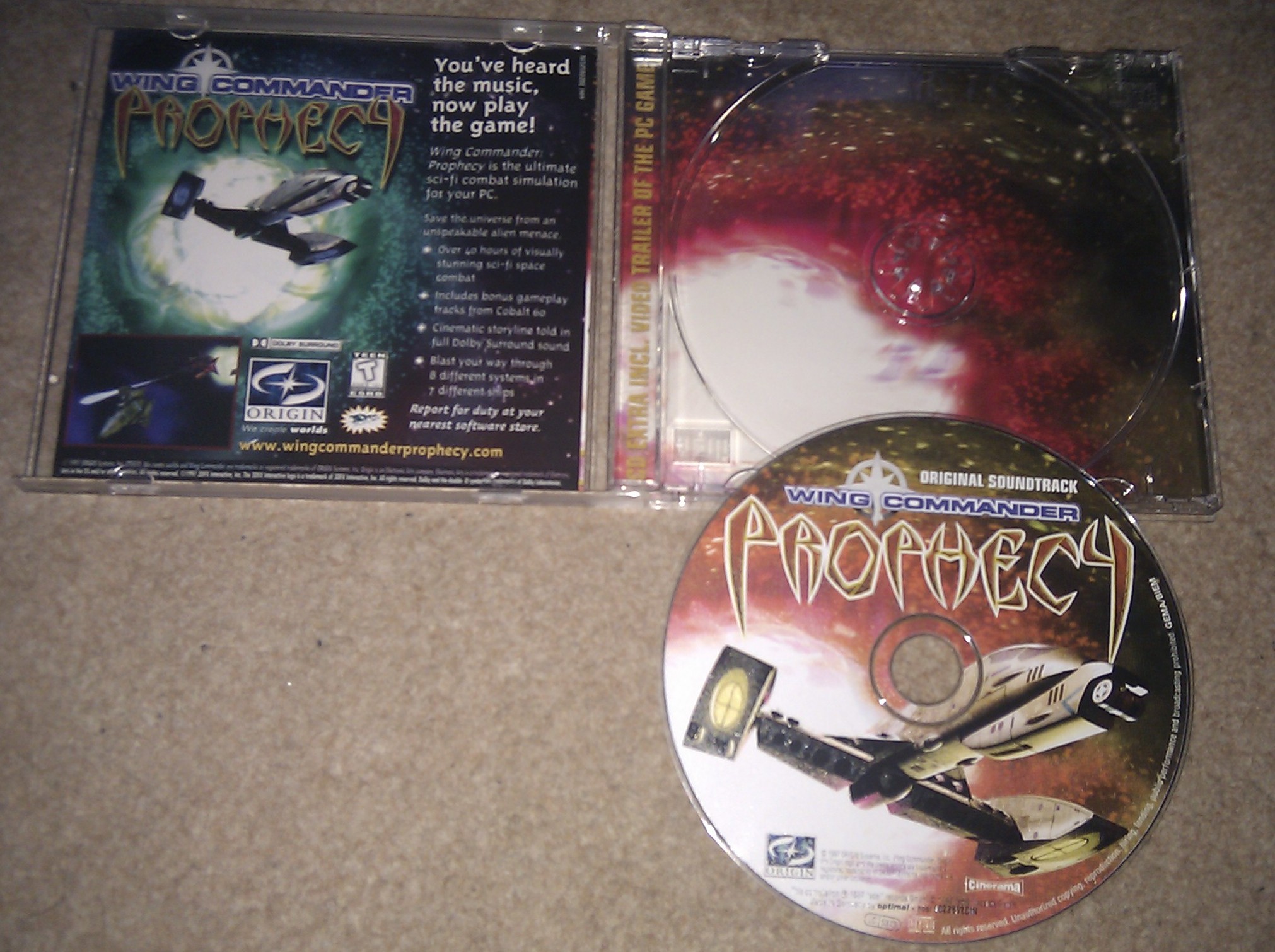 To get back to the album, most of the tracks are fairly dark with plenty of emphasis on drum and bass. Only a few of the them have clear connections to the game in their titles, (e.g. Prophecy or The Vampire Strikes Back) but the reference doesn’t stretch to the lyrics. In terms of quality, it’s a real mixed bag with so many bands in there. The music usually falls somewhere between metal and dance and none of it is quite my thing. Most of it is decent enough apart from an out of place dance style track near the end of the album. It’s definitely not a CD I’d listen to often but I can see some of these tracks working well as background music to an action game.

The odd thing is that I don’t remember any of the music being in the game itself, which mainly used an orchestral score. The only place I recall anything different was in the simulator missions which were optional. A couple of those missions used remixed (and much improved) versions of the two Cobalt 60 tracks without the lyrics but those are the only tracks I recognised. How the soundtrack CD to a game ended up not including any of the game’s soundtrack is anyone’s guess.

The CD contains a multi-media element of a Prophecy gameplay video with Cobolt 60’s music over the top. This shows an earlier version of the game with a different HUD design and is available on WCPedia for anyone wanting a look. If you prefer to own the real thing, thanks to all the bands involved this CD seems to be extremely common and available very cheaply.

Speaking for myself, I’m holding off on spending money on pretty much anything for the immediate future as against my better judgement I just agreed to spend an inordinate amount buying and importing the remainder of ex-Origin developer and serial game collector Rhea Shelley’s Origin trinkets, documents and assorted nik-naks. There is a lot of it so expect an onslaught of scans and photos as I work through everything when the parcels arrive.

As much as it goes against my hoarding instincts, I’ll have to sell some of this stuff on as I couldn’t really afford it all. If you ever wanted to own some of the original cover proofs or a near life-size cardboard promo of the Bioforge cyborg then keep your eyes on Ebay in the next month or two.