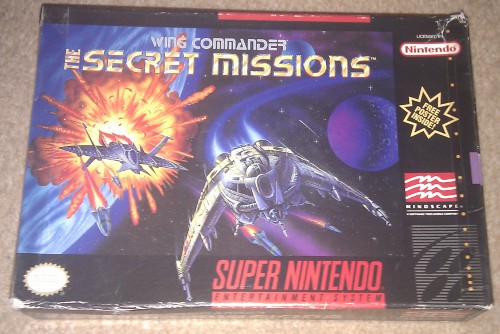 I had a change of plan and decided to carry on with the SNES Wing Commanders with Secret Missions. This was published in 1993 making the SNES the only system I know of other than DOS to get a separate release of the expansion pack, although in this case it is a stand-alone game.

This was the last Wing Commander game released on the SNES, but not the final Wing Commander game on Nintendo as Prophecy got an unlikely conversion to Gameboy Advance some years later. Wing Commander 2 was also developed for the SNES, but never got released due to falling demand for SNES titles by 1995. The game was more or less finished however with full reviews appearing in some games magazines. Unless they have recently found a copy, I think this is one of the holy grails for the team at wcnews.com much like The Lost Vale for Ultima fans. If copies were sent to reviewers, you would think one must have survived somewhere so I would hope it will turn up eventually.

I did like the SNES port of WC1 but had a few quibbles. With no branching missions to worry about + lessons learned from the first game, I expected this to iron out some of the problems and I’m pleased to say that so far it’s living up to this.

First off, the SNES gets a brand new intro which sets the scene for the games story showing the Kilrathi discussing their plans at their secret weapon base. This is a welcome addition and one up for the SNES version over the PC. According to the intro, the Kilrathi secret weapon creates a dramatic increase in gravity on the target causing vast destruction. The nature of the weapon was never revealed in the original SM1.

The start of the game also has a difficulty picker which I left at Ace. I’m hoping that my experience with WC1 will stand me in good stead here, but I remember some of these missions being the hardest in any WC games on the PC.

The graphics around the Tiger’s Claw look a little sharper and better defined than before. The dorm room has gone, since it served little purpose without savegames. The medals can now be viewed via the killboard instead and exiting the bar goes straight to the briefing. This does give the impression that the pilots must roll straight out of the bar into the briefing room but it saves precious cartridge space.

The take-off sequence is entirely new and while less impressive than the old one, is perhaps a little better suited to the SNES using Mode 7 to nice effect for the second half of the sequence when launching down the length of the Tiger’s Claw.

Once in space everything initially looks the same as WC1 but there are a few changes. The communications system has been largely dropped and there is now no way to order my wingman around. This is a bit of a loss if you ask me and he/she still asks to be let loose as if I even get a choice. The wingmen soon take things into their own hands so it’s not like I have to fight single-handed at least. This simpler system does make taunting the enemy practical although it’s not a tactic I’ve ever gone in for all that much.

Another obvious difference is the number of enemy I face on my first mission. This is right up there with the PC version and probably identical, although I can’t claim to know the missions well enough to say for sure. The enemies are still a little easier and seem to be particularly vulnerable to being tailed but there is going to be a real challenge here if the first 3 missions are anything to go by. If I’d tried to play this before WC1, I would have seriously struggled.

Something I managed not to mention in my WC1 posts (another piece of quality blogging!) was that the missile locking system doesn’t exist on either SNES game. I can fire any missile instantly and it’s always locked on my target. This takes away a little of the fun of the game trying to get a heat seeker lock but it does make missiles extremely lethal when you can always fire them exactly when you like.

Finally, Secret Missions has been behaving itself more than WC1, and I’ve had no trouble with ships not getting any nearer when I fly towards them. This little fix makes a huge difference and combat here is much closer to the PC.

Secret Missions even has the Goddard colony scene left intact, which has to be better than a slow zoom on a planet which is all we ever saw in WC1.

I’m only 3 missions in but as console-phobic as I usually am, it’s fair to say that I’m impressed with Secret Missions and I can’t say I’m enjoying it less than I would another replay of the PC version. The lack of analog controls isn’t even bothering me any more which comes as a surprise. Without changing a lot, I always thought Secret Missions significantly improved on the Wing Commander formula with more taxing missions and a better structured storyline. I’m very much enjoying this chance to play it again with a different slant.