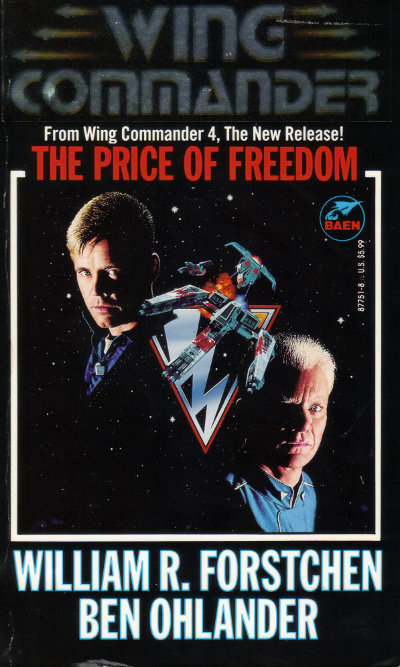 Onto Wing Commander novel #5 – The Price Of Freedom. This was co-authored by Forstchen and Ben Ohlander and published by Baen in 1996. This is the novelisation of Wing Commander 4 and as such I could probably say before I started reading it that it wasn’t going to win me over. WC4 is one of the most fun games I’ve played and hardly set a foot wrong in my eyes.  It was possibly the only Interactive Movie that ever deserved the title. There is no way the book is going to be able to compete but I gave it a go anyway in the hope that it would at least get somewhere near.

I’ve read the first part of this before actually as it came with the WC4 documentation. This is one of the better sections with a lot of extra background detail. As before, I’m not going to spell out the plot since I’ve done it once before when blogging the game but I’ll list some of the differences:-

This wasn’t a bad attempt but just as I thought before I started, it was no competition for the game. I didn’t feel that the changes to the plot improved things on the whole, but my main complaint was the amount of combat. This just isn’t all that entertaining in a book and after 4 previous WC novels I do feel like I’ve been there before. Combined with a plot I already know inside out, it didn’t make for the most entertaining of the series. There was still enough extra content in here for it to be possibly be worth reading for anyone who enjoyed WC4, but I’m glad that the remaining books in the series aren’t based around the games.