Hope you all have had a good Christmas. Apologies for the lack of posts in December but spare time has been at a premium in recent weeks. This isn’t going to change anytime soon but I thought I should dig out another random item from the collection for a quick post:- 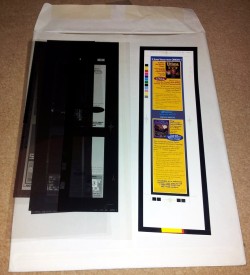 This is the separates and proof for a 1/3 page magazine advert for the second Ultima Trilogy and Wing Commander Deluxe which dates to March 1992. The $79.95 price for the Ultima trilogy puts the recent GOG sale into context where you could get nearly all the Ultima games for around $15. The trilogy still sounds like good value compared to Wing Commander Deluxe at the same price – it’s a whole lot cheaper to be a gamer these days. I love the “more than 5.5 megabytes, for long-term play value” quote which truly shows the age of this particular advert.

On a different topic, I’ve been informed that there is an issue with the Ultima Patcher on Win 8 64 bit not installing the Ultima 5 graphics/music patch which I’ve replicated. This may well affect all versions of Windows as I’d be more likely to blame GOG’s version 2.0 installer having changed something. I’m not going to be able to look at this for at least another week but will take the opportunity to add the new default install locations into the search directories when I do and have a quick check of all the other games. If there is anything else I should be fixing/adding, now would be a good time to let me know.