In the course of this blog I’ve scanned numerous Wing Commander reviews from various magazines. Some of these were more flattering than others but from WC3 on they all had one thing in common in that Wing Commander was being compared to X-Wing. It’s a tenuous reason to blog through it on here but I thought it would be fun to join the rebel alliance once again and see how the game stacks up 20 years later. I should say now that my opinion isn’t going to be all that unbiased as X-Wing is without a doubt one of my favourite games of all time but prior to this I can’t even remember the last time I played it. 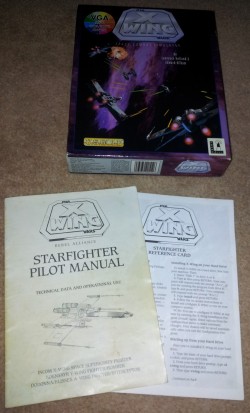 X-Wing was published by Lucasarts in 1993 between Wing Commander 2 and 3 and was helmed by Lawrence Holland and Edward Kilham. Kilham had previously worked on adventure games for Lucasarts but Holland had a long history of serious flight sims such as Secret Weapons Of The Luftwaffe which is very apparent in the approach taken to the game. X-Wing used a full 3D polygonal engine which was extremely impressive at the time although it was years before I had a PC capable of playing it properly. Allegedly Lucasarts held off making the game for years until the technology had arrived to do it justice as they didn’t want to do anything unworthy of the Star Wars brand. They were clearly not the same company 10 years later. 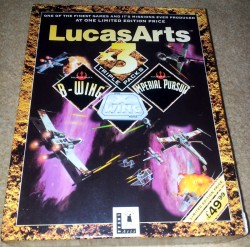 X-Wing is a game that has seen numerous expansions and re-releases. It was followed later in 1993 by two expansion packs, both adding a new tour of duty of around 15 missions. There was also a combined floppy disk release shortly after with the original game and both of these expansions. A year later came the CD Collector’s edition which expanded on this further with some extra speech included while in the cockpit and some of the missions having been optionally tweaked to make them slightly easier. I don’t have the box for it but that’s the version I’ll be playing 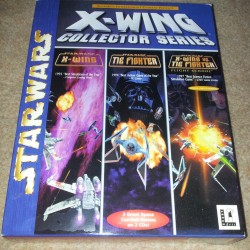 Finally in 1997 there was another re-release this time for Windows using the X-Wing Versus Tie Fighter engine. This greatly improved the graphics with the hitch that it now used CD audio instead of the original MIDI soundtrack which wasn’t to everyone’s taste. The gameplay remained the same and it was a great update if you didn’t miss that music. I do recall that it wasn’t exactly easy to run on newer versions of Windows. This remake saw the light of day again in the X-Wing Trilogy in 2000 which also included X-Wing Alliance.

X-Wing starts with a lengthy intro in true Star Wars style with the scrolling text and a giant Star Destroyer travelling across the screen. I’ve grown incredibly tired of this being used in countless games and a handful of best forgotten movies since but it was quite the novelty at the time. The intro goes on to show the new X-Wing fighters repelling a Tie Fighter strike. I remember being mightily impressed with all this although the mostly hand drawn artwork does look more than a little dated now. It’s a sign of the age of the game that these cutscenes even had different options for slower computers with less/no panning of the 2D artwork on slower machines. I do have to wonder about the efficiency of the code here as Origin FX was doing this sort of thing on a 286. 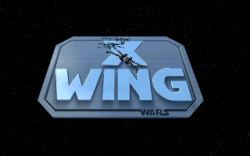 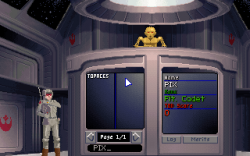 With the intro done, I find myself as a new recruit waiting to sign in on the rebel flagship Independence. There isn’t any story given either in the intro or the skimpy manual and I’m just another faceless recruit to the rebellion. 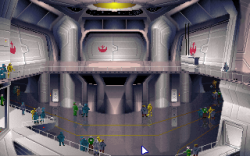 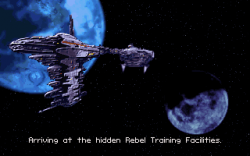 In something of a nod to Wing Commander the interface is based around the ship interior with all the various options being behind different doors. There is a camera room which can be used to view footage captured in game + a room with all the ship specs. I won’t be making use of either of these and instead head straight for the pilot proving grounds. 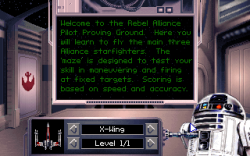 The pilot proving grounds (otherwise known as the maze) consist of a series of gates which have to be flown through within a time limit. These can have up to two targets which can be shot for a 2 second time bonus but also shoot back in some cases. There are an endless series of levels with every increasing difficulty with flight badges on offer for players who can complete level 8 in each ship. This isn’t a quick task as there are over 130 gates on each level but none of this is compulsory as such and players are free to jump straight into the game. The way I remember it, if you weren’t up to speed you could expect to die within minutes of starting a tour of duty so I may as well do this properly. 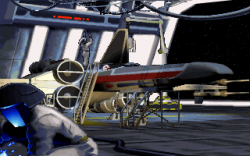 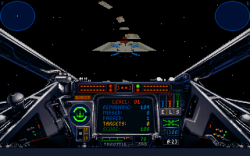 After a not especially impressive launch sequence I’m into the game at last with a multitude of platforms ahead of me all of which carry 3 gates. One thing that strikes me immediately is just how smooth the engine is. There may not be a ton of detail with hardly a texture to be seen in this engine but the graphics do their job and it’s extremely easy to be precise with the controls when everything is this fluid.

I’m piloting an X-Wing for this first run and it’s certainly responsive and easy to steer if a whole lot slower to adjust speed than the ships in Wing Commander. The ship’s power systems are highly configurable and success in this game is only possible by tweaking these constantly. Each ship has laser and shield systems with five power settings. The middle of these maintains current charge if nothing drains either system and is how you start in each mission. Raising or lowering from here affects ship speed and system power accordingly. It’s possible to transfer power between shields and laser systems and since the laser system charges marginally faster than the shields the most efficient way to play the maze is to put max power to lasers, none to shields and keep transferring laser power as required. Wing Commander did add support for some power manipulation after X-Wing but it never required it to the same degree or offered any benefit of higher top speeds. It always struck me as being shoved in because X-Wing had it in all honesty. I’m not so sure either system is better than the other so much as just different. The versatility here is certainly welcome but after an hour of transferring power constantly my hand was starting to cramp up over the shift and F9 keys. 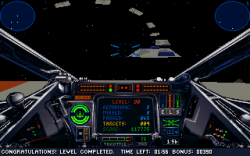 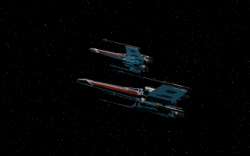 The X-Wing has four lasers mounted on each wingtip and getting used to the slightly different trajectory when firing from each of these is another key to getting anywhere in this game. It’s particularly true on the maze as the difference is exaggerated when close to a target and it’s even possible to shoot targets when the are slightly off screen in the right circumstances. It is possible to link fire to either 2 or four simultaneous beams to get around this but I’d far rather have the higher fire rate at least for this part of the game. The different firing configuration is the main difference between the 3 ships I’ll be getting to fly and with the smooth engine allowing for extremely precise aiming making the little adjustments for each laser is all part of the fun.

About an hour after entering the maze I get to the end of level 8 having played through the lot in one go. I’m definitely not as good as I used to be at this but it all came back to me extremely quickly. I now get to do exactly the same in the Y-Wing and A-Wing. 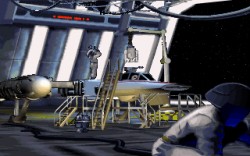 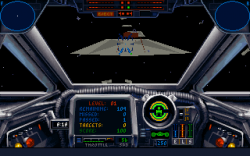 The Y-Wing has nose mounted lasers meaning that it almost fires in a dead straight line making it the easiest ship to aim with. It is also the only ship with a secondary laser system (Ion Cannons) which can be used to disable ships instead of destroying them. It has the downside of being the slowest of the rebel ships but it still turns quickly enough so it’s not comparable with the likes of a Broadsword in WC2 and is still a capable fighter. 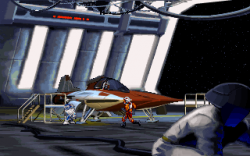 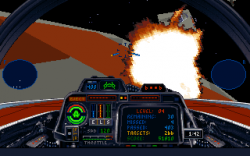 Finally the A-Wing is the newest and lightest of the rebel craft. This can’t carry torpedos and instead has the smaller concussion missiles but it’s far quicker than the other ships. It has two wing mounted lasers which have a similar separation to those on the X-Wing. 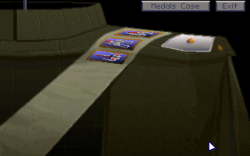 I spend most of a Sunday afternoon flying through the maze before I get all the flight badges. It’s undoubtedly refreshed some of my flight skills having possibly not played this game since the last millennium but it does drag out a little. I wouldn’t say it ever gets dull exactly as there isn’t time to dwell but it does seem excessive that I can’t skip to level 8 straight off having done it in one of the ships already. The 3 ships strike me as being extremely similar to pilot and there isn’t enough difference to warrant having to go through the whole thing 3 times but then I’m not being forced to as such. The differences between the ships will hopefully become more apparent when in combat.

I think it’s safe to say that you wouldn’t expect to fire up a Wing Commander and spend several hours flying through gates. I’m hardly fresh to this game so I can’t really say if this is needed practice for a new player or a little over the top at this point. It’s readily apparent that the game is being treated as a sim with the campaigns only being there for the player who has learnt all the skills needed to be a pilot already. To further emphasise this I’ll be flying historical missions in a simulator next with 6 for each ship. This does mean I should finally get to aim at a moving target and not before time.