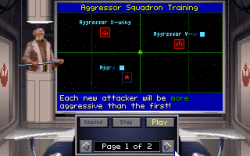 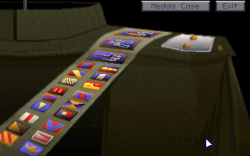 The A-Wing historical missions are quickly beaten except for mission #2 which involves taking on rebel pilots in X-Wings, Y-Wings and A-Wings of increasing skill levels all the way up to top ace. As a training mission, this is clearly ludicrous as a trainee pilot could hardly be expected to win this sort of fight. The reality isn’t as difficult as it should be but still hard enough that I needed numerous attempts. It’s the A-Wings with their concussion missiles that tended to be my undoing as I attempted to shoot the missiles down on first approach but I’m far better off just avoiding them. 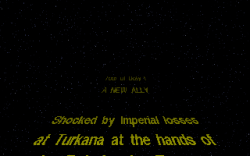 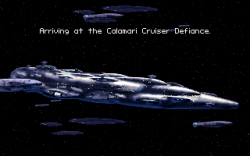 Moving onto the first tour of duty, the storyline of the game finally begins in earnest. This first tour deals with the empire attempting to crush the rising rebellion through operation Strike Fear. Early missions take a backward step if anything from some of the historical missions and it’s a relatively gentle introduction. 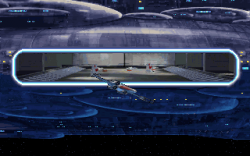 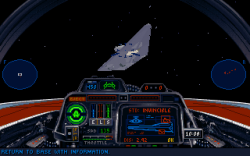 There is some variety but the vast majority of the missions in these campaigns involve some sort of escorting whether it’s shuttles, fighters or freighters. There is a definite theme of having to attack bombers or transports in precedent to fighters in order to protect the ships they would otherwise attack. This frequently ends up with fighting endless streams of fighters coming from a distant Star Destroyer which have to be intercepted while some sort of docking operation is going on. In one of these early missions all my wingmen deciding that the mission is complete hyperspace off and I’m left facing dozens of TIE’s on my own. There are some definite quirks like this to the mission design at times.

The overall storyline isn’t especially strong in this first tour and does tend to hop around in clumps of themed missions. It’s bolstered by a cutscene after 4 or 5 missions showing the empire taking over a rebel planet.

One mission involves stealing a freighter of R2 units which some pirates would like to get their hands on. This means fighting pirate Y-Wings instead of the usual TIE’s for a bit of a change. Shooting Y-Wing’s is different but TIE’s are more fun due to the high difficulty level in scoring a hit on such a small target. With Y-Wing’s it’s just a case of sitting on their tail for ages wearing down their shields. I hold on one target a little too long and manage to get myself blown up meaning in this case instant death. 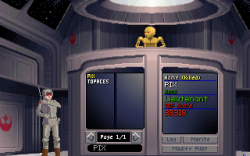 This leaves my game character dead and I have to modify this pilot to revive them losing all my skill points in the process and starting as a rookie again. This wasn’t the best of design decisions as the fact is you are going to die many times in these campaigns no matter how good you are. Some of the ships in later missions appear to attempt deliberate suicide runs and if this happens when you aren’t looking in the right direction there is precious little you can do about it.

If you do manage to eject, you may survive of course although more likely than not the empire picks you up for some personal torturing from Darth Vader.

If the rebels pick me up, then it’s some time in a bacta tank healing up and I get to replay the mission with my score intact. Suffice to say this gameplay mechanic was dropped in TIE Fighter and your pilot was restored as was after death. I can hardly be expected to start from scratch in a game this size just to get my score up again.

Aside from points, there are medals to be won in the campaign which I do get to keep should I have to revive my pilot. These are awarded for getting particularly high scores in any mission. 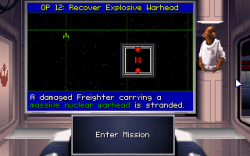 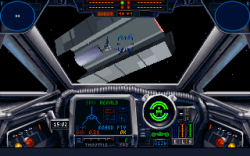 To get back to the tour, the rebels eventually manage to get together a plan to strike back by destroying the flagship of operation Strike Fear and to achieve this the final mission is to steal a nuclear warhead. This mission stuck in my mind as being particularly difficult from years back but I must have been using the wrong tactics as I didn’t have any trouble this time. It initially involves clearing a field of laser shooting mines from around the freighter. I think I used to thin these out with my torpedoes which would have been a mistake. Once done there is a long (5 minutes) wait while the docking operation happens to capture the freighter. I’m glad smartphones have been invented since 1993 to fill gaps like this as it’s not an uncommon occurrence in X-Wing.

The moment the freighter is captured, 4 transports hyperspace in so I have to wake up again and take them out as quickly as possible since they are targeting the freighter. I have exactly enough torpedoes to destroy them all but if I’d attempted to use lasers I expect I would have struggled to do this quickly enough.

That ends the first tour as the warhead is smuggled onto the Star Destroyer in a captured shuttle. 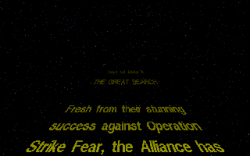 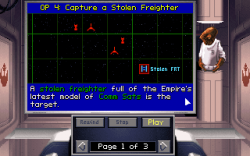 I’ve not got very far but the story appears to pick up pace in tour 2 which deals with the discovery of the empire’s new operation and the rebels desperately trying to get information on it. One mission does bear special mention as it must have taken me 3 hours to beat it. The mission in question involves capturing yet another freighter. This has to be disabled first so is left extremely vulnerable with a single torpedo hit being enough to destroy it. To make matters worse, the moment it is captured a Star Destroyer appears and starts launching bombers and fighters.

After some trial and error, I discover that the position the Star Destroyer starts in varies. In some cases it starts within missile range of the freighter meaning that torpedoes have been launched before I can even get to the bombers to intercept them. It is possible to shoot down torpedoes but I’m in a Y-Wing so hardly quick enough to intercept them and the mission is basically impossible in these circumstances. I end up trying over and over until the Star Destroyer hyperspaces into a more suitable location.

This still doesn’t make things easy. Destroying waves of bombers just results in another and another. Sooner or later one will slip through and by the time I catch it in a Y-Wing it will have launched a torpedo and it’s back to the beginning again. However I discover by getting close enough to the Star Destroyer it launches a wing of bombers targeting me instead so I purposely left one alive and flew round in circles avoiding it while the freighter escaped. I shouldn’t really have to resort to this sort of cheap trick and it’s poor mission design all round. When I’m having to wait for docking operations prior to the Star Destroyer appearing, all of these attempts ate up loads of time. X-Wing really does rely on the gamer having a good deal of patience yet can be extremely tense when things heat up because of it. If you have 20 minutes invested in a mission, you really don’t want to make silly mistakes but there is a high degree of frustration when you just get unlucky. 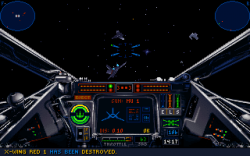 I eventually make it through that mission. The second tour is noticeably harder than anything prior to it. The empire has introduced the assault gunboat by this point which is a large fully shielded fighter which I’m starting to run into more and more. These are extremely slow but take a lot of hits and pack some firepower when in groups. My wingmen appear to be completely unable to cope with them and usually end up becoming cannon fodder. The final mission I played involved escorting a Corvette which was doing a much better job at defending itself than its X-Wing escort.

After about 6 missions of tour 2, I make it to another cutscene showing the rebels distributing captured comm-sats to listen into empire traffic. One listening station discovers some extremely familiar looking schematics which we will no doubt be hearing more about later.

As I get further into this game, it is clearly showing its age in the difficulty and pacing. You just wouldn’t make a game that required so much waiting these days and I really am missing Tie Fighters time compression at this point. Back when I first played X-Wing it no doubt took me months to beat it and we expected games to last for a while especially given the relatively high price. The fact that I can still remember some of these missions is a clue to how many attempts I must have needed.

Wing Commander also had some memorably impossible missions but it kept the player waiting around far less and concentrated on more immediate action. Despite the endless magazine comparisons, I really don’t think that the games are all that similar. Wing Commander is far more of an arcade shooter with its waves of enemies, instant action and of course the strong cinematic storyline and presentation backing it up. X-Wing is relatively sedate, tactical and with a story/presentation that is somewhat sterile by comparison. As to which is better, it’s just a matter of preference as far as I can see since they both do what they do extremely well. My preference would probably be X-Wing but it’s pretty demanding on the gamer going back and playing it again and Wing Commander is certainly more accessible these days. X-Wing does have one massive thing in its favour which is the Death Star trench run at the end of the game which I’ll be attempting to reach in part 4.