Thanks to the Ultima Codex, I just found out that today is the 20th anniversary of the release of Ultima 7 Part 2 – Serpent Isle. The later games do have their good points but for me this was the last of the classic Ultimas. If you’ve somehow managed to avoid playing it so far then head over to GOG to spend a ludicrously reasonable $6 to pick it up as part of the complete Ultima 7.

This seemed like the perfect excuse to see if I had any cool Serpent Isle stuff I could dig up. Don’t get your hopes up too high here as there wasn’t much. I do have all these disk labels:- 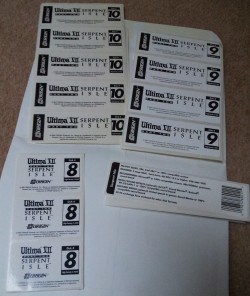 If I ever want to reproduce a Serpent Isle floppy I’m in luck as long as its number 8, 9 or 10. The other stickers are the specs that went on the bottom of the box. More interesting was this:- 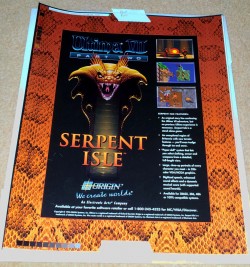 This is a full page magazine ad + positive separates dated 22nd October 1992 putting it just over 5 months before the release of the game. That’s the lot I’m afraid – the coolest bit of Serpent Isle memorabilia I’ve got is a proof of the Serpent cover art which I already shared here.