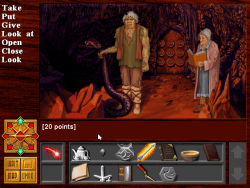 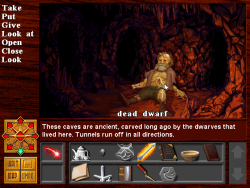 The world of stone turned out to be the most interesting so far by virtue of the more serious tone. The story slowly unfolds throughout and to start with the only people I encounter add dead servants raised through the arts of necromancy. These are easily manipulated as they are only a shadow of their former selves so not very intelligent. I especially like the puzzle where I have to get by a giant snake by commanding a particularly dumb but large zombie to grab it. Unfortunately he’s too dumb not to let go without constant instruction so I have to steal a children’s book off a zombie nanny, persuade her to follow me by telling her I know where her book is, then handing her the book back open at the appropriate page for her to read out a nursery rhyme all about snake grabbing. She reads this over and over giving me all the time I need to sneak by. 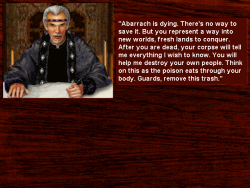 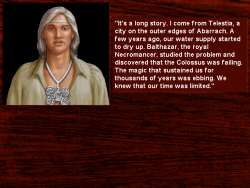 I eventually learn that all the cities former inhabitants left to seek help from the ruler of this realm (the Dynast) when the water started drying up. I sail off to find him but when I arrive he poisons me for my troubles and throws me in a cell to die. I’m not alone as yet another prince is in here in exactly the same predicament. He is the ruler of the city I just came for but didn’t get the response he’d hoped when he came for help. The Dynast plans to get all the information he needs from both of us by raising our corpses from the dead as his servants. 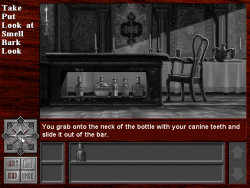 This leads to another quirky little puzzle. I’ve learned a possession spell by this point and use it to transfer my soul into the body of the Dynast’s hunting hound who is hanging around the cells. I know the antidote we need is in a clear bottle but the dog only has black and white vision. Paying close attention reveals that the coloured lines on the tablecloth behind all the bottles are obscured behind all but one meaning that must be the clear one.

Once cured, I escape with my new Sartan buddy to where all his people are hiding out. Behind an illusory wall I discover the remains of the realms first Dynast who I discover obliterated himself so he couldn’t be brought back from the dead. In an impressively evil scheme of his, it turns out that the staff carried by all Dynasts was created by damaging the Colossus of this world. The Colossus was all that provided water and life to its inhabitants and has been leaking magic ever since leading to the sorry state of the realm now. The staff now acts as a conduit for the remaining magic making the Dynast unchallengeable. If that wasn’t enough he also instituted the realms fondness for Necromancy at the time despite knowing that every time it was used someone else would randomly die before their time. This random death knew no barriers across the worlds hence the dead Sartans I found some time back.

Suffice to say, I repair the Colossus killing the Dynast in the process and leave the realm in civil war behind me as I head to the fourth and final realm of water. 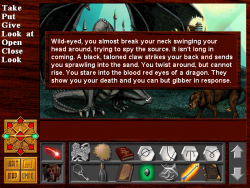 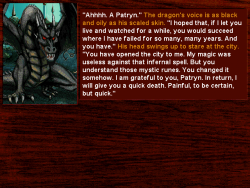 This realm is where the Sartans were to live in the original scheme. I find a city when I arrive protected by a ward rune which I promptly corrupt. At this point, the ultimate villain of the game makes their entrance – a particularly nasty dragon called Sang-Drax. He has me paralysed with his aura of fear so I have to transfer my soul into the dog which is now following me around and make a run for it while the dragon toasts my old body to a crisp. 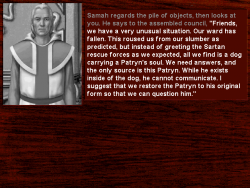 I’m not in dog form for long. I run into the now open city where the Sartan cast a spell to return me to my old shape at the expense of the dog whose body I took. Sang-Drax puts in another appearance at this point. Aside from having to power to cripple mortals with fear he can also assume any shape he wishes. He takes the final world seal, changes into my shape and promptly takes my ship so that he and Xar can go and reform the world killing most of the remaining inhabitants in the process.

Luckily the Sartans have another ship they can lend me so I can go and save the universe. They don’t offer to come along and lend a hand of course and I have to head back to the last place I should want to go – the Labyrinth. The vortex where the reunification will take place is located right at it’s very centre. The Labyrinth isn’t exactly hospitable with tigermen and man-eating plants to contend with. 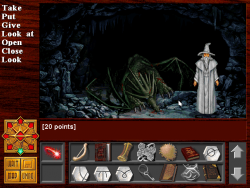 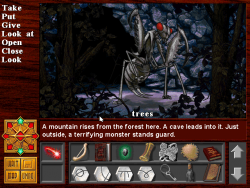 I puzzle my way past all of these saving a village of Patryns in the process, kill off a giant ant monster only to come face to face with Sang-Drax again. At this point I use a rock which I’ve been carrying around most of the time since meeting Zifnab. It summons him and more importantly his dragon so the two can do battle. Sang-Drax escapes badly wounded and Zifnab transports us all to the vortex to continue the chase.

The vortex provides the climax to the game with some intriguing puzzles on the way to its centre and then a final showdown with Sang-Drax. I manage to convince Xar that I’m the real Haplo and reunification is a bad idea at which point Sang-Drax fireballs him to death. I have to carry out the ritual on my own, the first part of which is placing each of the world seals in the appropriate spire.

Each seal placement unleashes a torrent of that element on the platform I’m stood on. I’m inside a protected area but I can use this to slow down Sang-Drax as he takes different forms against me. The order I have to go here is fairly apparent. What is less apparent is which of the numerous runes I need to select to carry out the final ritual. I should have paid more attention to Xar earlier in the game and I’m reduced to trial and error. I know it’s one of six mentioned in a book I’m carrying and number 4 does the trick.

In another FMV of dubious quality Sang-Drax is destroyed and the worlds are connected through the Death Gate hopefully helping all the races from here on out, except my own who are still mostly trapped inside the Labyrinth. This may suggest a possible sequel which I’d be playing next if it had ever happened.

It may not come across in my write-up but the story started to come together in this second half of the game. The ending was suitably climactic with the ending stages throwing numerous challenges at me. It did seem a little strange in a graphical adventure how it would go into describing half the events through text instead of showing them. It’s definitely not something that would have happened much in Lucasarts or Sierra games but it does mean that the developers could concentrate on the playable parts of the game instead and this clearly paid off. It’s arguably a little too easy but there is no flab here and it still took many hours to play through with far more puzzles packed into it than most adventure games I’ve played. I’d definitely recommend this one highly – I’ve not enjoyed an adventure game as much since Gray Matter and Death Gate beats it easily in the gameplay department.

What started me playing this was allegedly to see if I could form an opinion on Tracy Hickman’s work after he joined the Shroud Of The Avatar team. I would guess that Death Gate strayed way too far from the source for me to attempt that but there were some interesting moral conflicts in there and enough complexity to the world and it’s characters to suggest that the novels would be well worth a look. I may give them a go some time but right now there are still games to be played. I got my SNES modded yesterday so I ought to play around with that a bit. All this electronic tinkering has been going so well I’ve decided I’m going to attempt to recap and de-buzz my Vectrex next but it will be a week or two before I get my hands on all the parts I need. In the meanwhile, I’m about 15 years overdue to play Descent Freespace.