There is a theme starting here but the world of fire isn’t all that fiery and is instead full of giant trees populated by elves. As the base of all these is a huge citadel barred by a locked door with three symbols on it. A quest for these 3 items has to be imminent. 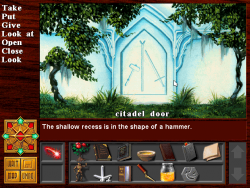 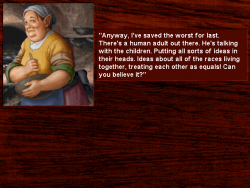 I go off to talk to the elves living high in the forest and befriend one of the children by giving away a doll I picked up in the last world. They then invite me to a meeting the children have arranged with a wizard out in the woods. 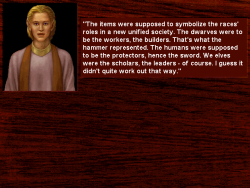 While we are waiting for the wizard to arrive, I rescue a young elf prince who has tried to climb down into a bottomless pit called “The Maw” but only got as far as the first ledge. After rescuing him with a clothes line, he then wants me to help him win the heart of a human princess. I have to get the elves staff which has been cast into the Maw so that she will take him seriously as a leader, find him a gift for her and give him the right words to say. A typical day in the life of an adventurer… 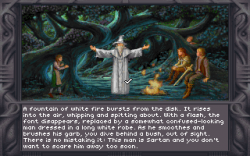 About this time, the wizard Zefnab shows up and turns out to be a living Sartan. As soon as he catches sight of me he disappears with a transportation spell which I immediately copy to follow him. 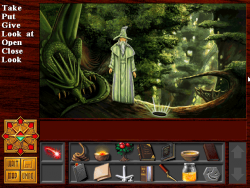 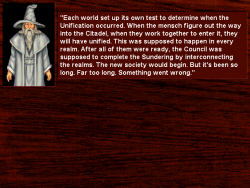 He isn’t exactly friendly what with our races being sworn enemies but feels safe enough to talk due to the fact that his giant pet dragon is sat next to him. He has a whole lot to say about how the Sartan plan was to get the mensch (humans, elves + dwarves) on each realm to exist in unity and then unite all four worlds. This doesn’t sound so evil considering these are the bad guys in this story – I can see a betrayal of the Patryns coming before the end of this game.

Most of the characters in this realm are played fairly straight, Zifnab on the other hand is clearly out for laughs with all sorts of references to the real world and generally “zany” dialog. It may just be me but this falls absolutely flat and isn’t even remotely funny. It would have come across better just reading the dialog here and the voice acting isn’t doing it any favours. 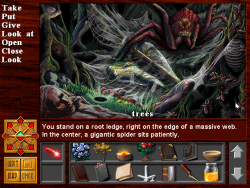 After exhausting all conversation options I take Zefnab’s transportation disk, throw it into the maw, and then cast a transportation spell to see what is at the bottom. Turns out it’s a giant people eating spider which is conveniently ignoring me for now. With some fire and a jar of honey, I set some giant insects on it which in a bit of species role-reversal kill off the spider leaving me free to plunder the staff and get out of there. 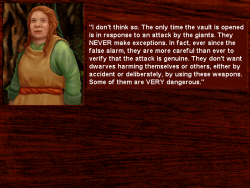 Having managed to help the elf woo his love, I now get both of them as companions and they carry two of the 3 pieces I need to open the citadel door between them. Zifnab explained earlier that this door was a test to see when the races had united and the Citadel was intended to be a place for all of them to live together.

That means I need to get the hammer from the dwarves. As luck would have it, I find one tied to a tree by a fourth race called the Titans. This race was created by the Sartans to run the Citadel once it was open but in the meanwhile have gone a little mad and started worshipping a crystal Sartan relic and generally squishing anyone who goes in their part of the forest. I won’t go into detail but in a convoluted series of puzzles, I steal this crystal which has the rune for the next world, get the rescued dwarf to bring me the hammer and open up the Citadel for one and all to live in it.

The world seal I’m looking for is in the Citadel. Zifnab actually thanks me for what I’ve done while pointing out the duplicitous nature of the overall Patryn plan and my part in it. Xar is certainly coming across as ever more evil every time I take these seals back but this being an adventure game I only have the one course of action still available and it’s off to world #3 – stone. 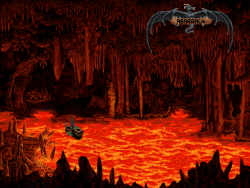 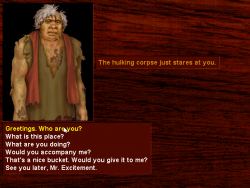 This world turns out to be reasonably stony after all, although it has a whole lot more fire than the previous realm. Everyone in it appears to be dead but still walking and talking (just about). I left it here for now anyway and will be back with this world as and when.

If anything, I’d say that this game got a little easier in this last realm. I hardly got any new spells and the bit that had me stumped the longest was at the start where I didn’t realise that I could go back to my ship and fly to a second location. There was a half decent if simplistic backstory in this realm which could have played out better if Zefnab had a different character. It should have been a tense meeting with my first live Sartan, not a series of desperately unfunny fourth wall breaking dialog. Later scenes did manage to build a bit of tension when I stole the crystal artefact and had a horde of angry titans on my tail.

The characters in this realm were a little more rounded and the overall story arc is starting to take shape. This story doesn’t look like it will be the games strong point unless it develops further – it always feels like I’m just scratching the surface of the world enough to solve my immediate problems but I’m not really learning about it. This game could really do with reams more of unnecessary text to pad out the characters and world (a la Longest Journey).

The puzzle and game design have continued to be excellent though and it’s still a joy to play. Splitting the game into these bite size chunks may hurt the story but it keeps the adventuring tight and focussed. I really am enjoying this one and it’s up there with any of the better adventure games I’ve played. Unless it goes badly wrong, this is essential adventure gaming from what I’m seeing and deserves to be far better known.

Part 4 may be delayed as I’m hoping to be modding my SNES today for multi-region + 50/60 Hz. I got my Megadrive done last weekend but with the SNES I’ve been waiting for a gamebit screwdriver to arrive in the post so that I can actually open it up.