I’ve been something of a fan of the Vectrex console ever since getting hold of one a few years back. The Vectrex was unique in the history of games consoles as it came with a built-in vector monitor. The pin sharp, glowing line graphics this produces are completely unlike the raster graphics we are all used to and give the console a timeless quality as far as I’m concerned. I’ve always fancied having a go at programming on one but never built up enough courage to take the plunge into the assembly coding that would be required. Thanks to a newly released cartridge, (the Vectrex32), I no longer need to. 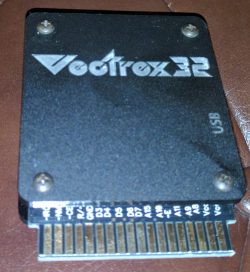 The Vectrex32 plugs into the Vectrex like any other cartridge. The difference is that it’s a 32 bit computer in its own right that takes over all the processing duties of the console. This means programs can now be written in BASIC instead of assembly and it vastly increases the processing power available. In addition, the cartridge can interface with terminal software on the PC via USB for easy debugging and copying the basic code over in the first place. Having spent a few hours playing around with it, it’s quite a neat system and it didn’t take long to get my first code up and running. I am finding that I need to stop each program running entirely before copying over my new version of the code every time otherwise I got file corruption trouble. This is slightly tiresome but not a major deal now I figured it out. The other snag with the Vectrex32 is that I need the real hardware to be able to try to run my code. I’d really hate to wear out my Vectrex and would prefer an emulator option in the long run.

Hopefully, the option to code in a high level language will produce a flood of new Vectrex games. I’m going to be giving it a go at least and the project I’m tackling is a reasonably faithful port of Akalabeth onto the platform all those line graphics were clearly meant for in the first place. How successful this will be is yet to be seen as there are still hardware limitations to deal with (mainly the number of lines and buttons). I thought I’d deal with the most difficult and interesting stuff first. I’ve built a single level 9×9 maze array to give me something to work with and set about getting the movement and graphics in place to wander around the level. This has proved considerably easier than I expected actually. You basically draw what’s on the left, middle, and right directly in front of the player, then scale it down a little and repeat, and just keep going scaling it down a little more for each grid of the map. No maths skills or understanding of 3D were needed whatsoever which is probably just as well.

Something you don’t realise about the Vectrex until you start programming on it, is that the lines are all effectively drawn with a virtual pen that you have to move around the screen in the code. This pen drifts a little with each move meaning that your lines don’t necessarily meet up despite having the same coordinates. I keep having to reset my pointer to the middle of the screen and draw things in chunks to get around this.

I only started this weekend and have got as far as being able to walk around the maze, go through doors and have drawn the graphics for a couple of monsters. The Vectrex can only really handle one monster at a time reliably or the cartridges 2K buffer runs out of space + the screen starts flickering with the pen not being able to keep up. This means the monsters in this version will be able to hide behind each other. I reckon with chests, trap doors, ladders, etc. they are much simpler graphics and it will be OK to show all of them at once.

I considered porting the code from the original Akalabeth since it was also written in BASIC but the two variants on BASIC looked far too different for this to be worthwhile. Instead, I’ve written everything from scratch so far other than borrowing the monster drawing code. Even this is quite different but I can still extract the coordinate numbers and scale them down a little to suit my needs. I may borrow some more of that code in the long run for maze generation and the like but I’m nowhere near that point yet. The next stage will be to finish implementing the graphics for all the different monsters and objects, then I’ll have a go at putting some actual gameplay in.

I’ll release the source code once there is something worthwhile to share. In the meanwhile, here’s a few screenshots of what it looks like so far, including a close up of the fearsome balron. You’ll never be able to get quite that close to it when I’m done as you shouldn’t really be able to occupy the same square. 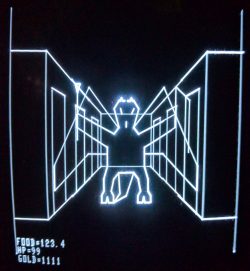 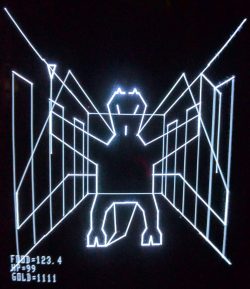 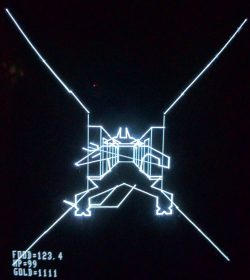