I’m pleased to say there were no major difficulties in knocking off another 2 levels of Caverns Of Callisto and part 2 of the longplay is below:-

I kept with the same plan as before mapping everything out before attempting to play through the levels. I had a practice run this time which went perfectly not losing any lives. When it came to the real thing it didn’t go anywhere near as smoothly with 3 lives being lost in quick succession + I forgot to get the key and had to go back for it. I still finished with the same lives as I started at least so it should be good enough to limp to the end of the game. In the unlikely event anyone else ever wants to have a crack at finishing this, I’ve scanned in the annotated maps so far below:- 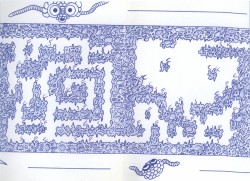 The levels are getting harder at this point and I’m finding my laser blaster does have a use after all. This is going to be especially true in level 5 which I’ve still only got half mapped out. I’ve seen enough to recall that it ramps the difficulty way up with narrow twisty corridors and lots of critters. The concluding part 3 will be up next if I can finish it.